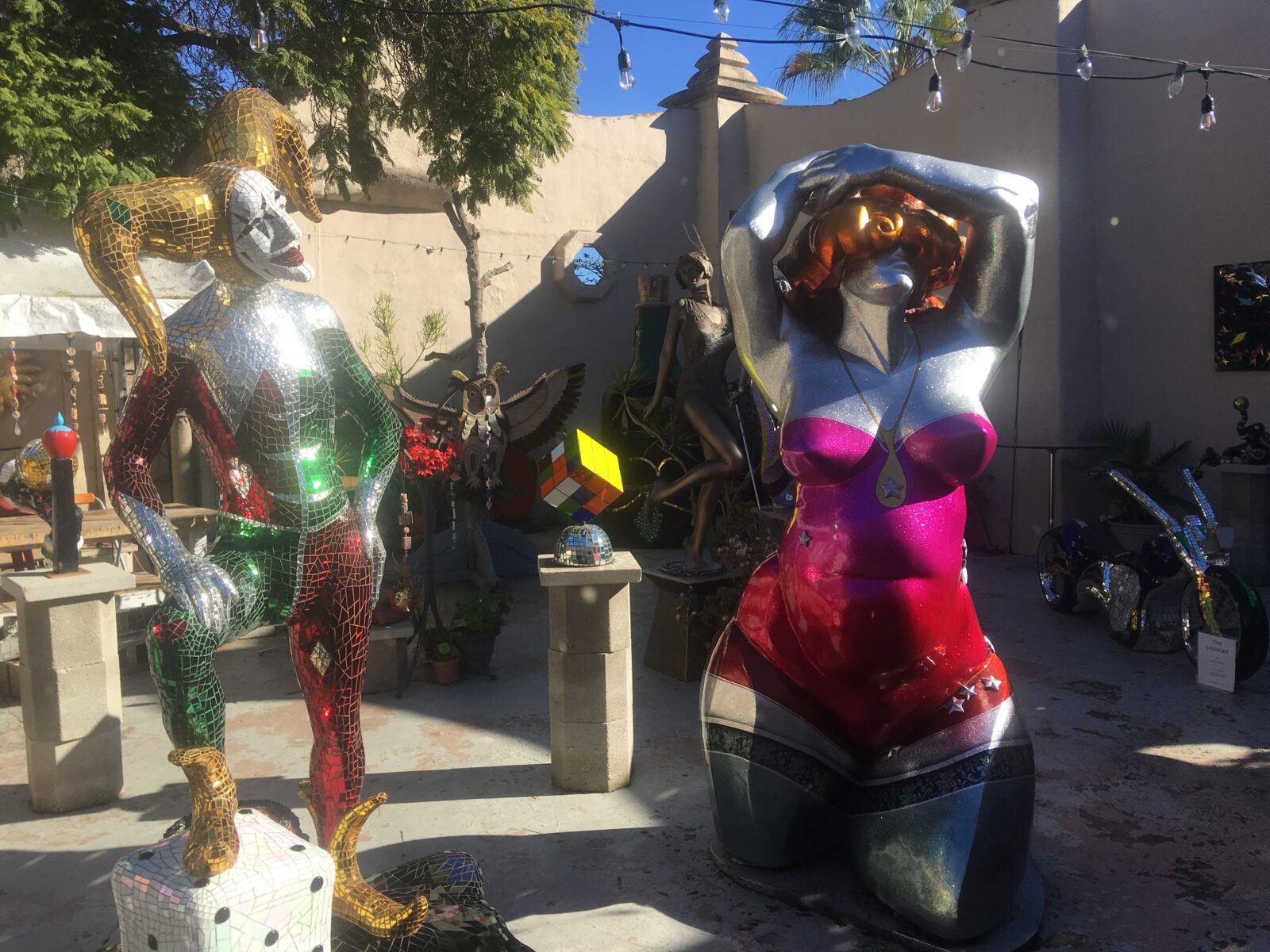 Jeff stopped by this morning and dropped off the dimmer switches for Eric’s hot- halogen-under-counter-spots to low-power-bright-LED lighting renovation along with a new gas regulator for the grill. It seems the fixer can always get his fix, even when the address reads “The Pace Arrow in site #9.

With the weather shaping up to be one of those winter days that makes everyone in San Diego realize why they moved here (sunny and 75), we pushed off on the Como’s for the iconic Balboa Park in the center of town. Our metro-walk excursion the day before is a stark contrast to the joy of e-bike touring. While the Trolley was cool, the walking and waiting part is frustrating compared to the go-go freedom on the Como.

Powering up, we blasted down the Friar Road interstate, in the bike lane, at high speed paralleling the Trolley line. Turning south into town, sometimes entering turbo-3 power assist on the hilly terrain, we checked out the neighborhoods, ogling Mediterranean style estates and pumping past the lands of apartment living. San Diego rivals DC in home prices – it’s a weather vs. world power coin-toss.

Balboa Park is a 1200 acre urban cultural park, home to museums, sports fields, endless paths, and the city zoo. Along the way, we met the park’s owner, Salley with an “ey”, named after her Dad. She spent a half hour telling us where to go, and where not to go (avoid the canyons, weirdos hang out there), along with a detailed history of the park over the past 40 years. Finishing up with life advice, we were ready to reconnoiter as it will take many future days to get to know Balboa Park.

There are very few activities that you cannot pursue at Balboa Park. Baseball, golf, tennis, swimming and biking are all in. Maybe not so obvious are drunken disc golf, and medieval combat both of which are more popular in San Diego than you might imagine. We’ll be back for disc golf, but leave the sword fighting to the pros.

The very beautiful park was packed with visitors trying to park at the zoo. We effortlessly moved through the crowded roads as cars moved out of the way. Stopping for lunch and exploring the artist’s village, Sheri fielded questions from tourists on restroom locations, parking lot rules, and operating times for the zoo. Suddenly all the deference from the cars made sense, Sheri in her “safety vest” looked like a cop on bike patrol. The vest even had a reflective patch on the breast pocket that resembled a badge. Brilliant! There was very little chance that someone would attempt to steal these bikes.

Artist Village is an artist in residence camp where sculptors, painters, potters and other creative types produce and sell their wares. It reminded us of the Asheville Arts District, but with more diverse medium and points of view. We noted museums and historic sites to return to another day, and exited the park to the south into downtown San Diego proper. Our destination was The Donut Bar, famous from the FoodNetwork TV show, Cheap Eats. Too bad for our sweet tooth but probably best for our health, they had sold out for the day. A local law enforcement officer came over to chat with his fellow patrolwoman to explain that they often re-open for an encore serving at 5pm. That being too close to sunset for us, we continued on to check out the waterfront.

The USS Midway, CV-41, is now an anchor attraction. The oldest aircraft carrier operating in the fleet when Eric was doing his thing, she looked like a fun trip down memory lane so we will return for the full tour on another day.

While temps were in the 70s and the bay was full of sailboats, the sun beginning to set on the short winter day told us it was time to head back. We took the scenic bike route overlooking the city’s airport. The approach is even more famous than DC’s river approach since the airliners pass just feet above the buildings on the hill overlooking the runway.

While most of the day was a search mission that involved a combo of power peddling and slow rolling, we have a good handle to carry on the work of Vasco Nunez de Balboa – explorer, governor and conquistador.