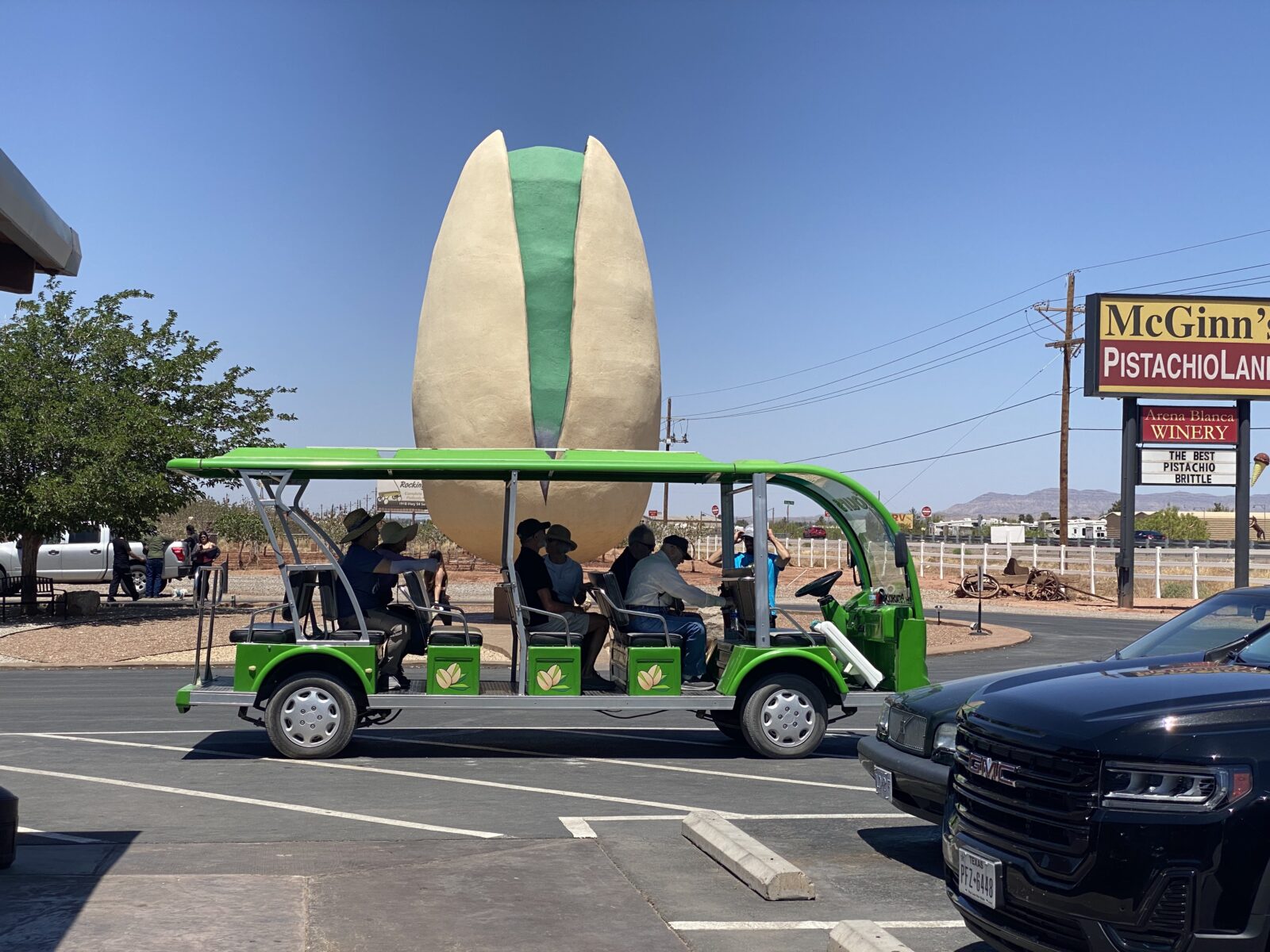 The young man with the automatic weapon stated more than asked, “Do you consent to a full inspection of the vehicle and all of its compartments?” Sounded okay to us as two security personnel poked their way through our camping gear in the bed of the truck. If you spent a large portion of your working life passing through security gates on military installations, this was nothing new. In fact, it felt kind of good watching the senior NCO (non commissioned officer) train an obvious newbie on how to do a vehicle search. We helped out with endless details of a 5th wheel hitch and of the downtown concert at the zoo, and of our adventures this past month, and …. Bet they pick someone else next time!

In ten minutes, having chatted about the benefits of the retired RV life with the NCO who still had 11 years to go until retirement, we rolled through the imposing gates to our temporary home on Holloman AFB in Alamogordo, New Mexico.

Military Fam Camps are a wonderful resource for retired and active duty folks. The one on Holloman is still being run First Come – First Serve and after a quick call to the camp host we were confident that they had room for us. Calling an audible, we bailed on a no-electric site 30 miles outside of town at Oliver Lee State Park and dashed in before someone else snagged our spot. Adjacent to White Sands National Park, Holloman AFB is near the Army’s massive White Sands missile test ranges, and flies some F-16s, and probably does other cool stuff that we don’t know about. All we do know is that two sonic booms shook the windows at Fam Camp. Cool!

Our plan is to home base at Fam Camp while re-provisioning Roxie, washing off the road dirt and repairing broken stuff. We’ll stay through next weekend when we have awesome access to the Air Force Thunderbirds flight demonstration team for the Holloman Air Show. In the meantime, the national park five miles in one direction, and the all-American small town of Alamogordo, NM is five miles in the other direction. We love it when serendipity brings a plan together.

Rough West Texas roads shredded Eric’s Como tires. Fortunately, Alamogordo has exactly one bike shop with the supplies needed to make repairs. Hitting a two-fer, Sheri picked up some local morning blend at White Sands Coffee Roasters next door. About the same size as Carlsbad, Alamogordo sits in the foothills of the beautiful Sacramento Mountains to the east, which provide a get-away to cool temps in the summer and skiing in the winter. For being in the middle of nowhere, it looks like there are lot of things to do.

The U.S. Government missile test ranges to the west anchor the local economy giving the area a secure, small-town feel. As if proving the point, we joined the locals downtown for an open-air concert at the city’s Alameda Park Zoo. Multi-generational families listened to the Rosewater Blues band cover hits from the 80s, 90s, and today while the kids noshed on funnel cakes and fries from the food trucks.

Our reconnoiter of the area would not be complete without a stop at the area’s most famous absurd attraction, the World’s Largest Pistachio. What is a road trip without roadside attractions? We laughed at the tourists boarding the tram for a drive through the fields, and the store serving up pistachio ice cream which was actually just Blue Bell Ice Cream served on a pistachio farm at tourist prices. We didn’t let the blatant commercialism stop us from sampling the flavored nuts inside the store. The giant statue may be kitschy, but the local farm grown pistachios were fantastico!

Many residents of the Fam Camp are what we call “long-termers.” They stay in the Fam Camp for the maximum allowable stay of 6 months. It would be easy to do. Life in small-town Alamogordo living on the amenity-rich Air Force Base would be sooo easy. We will have to be satisfied with our ten day stint as we catch our breath then head back out into the wilderness.