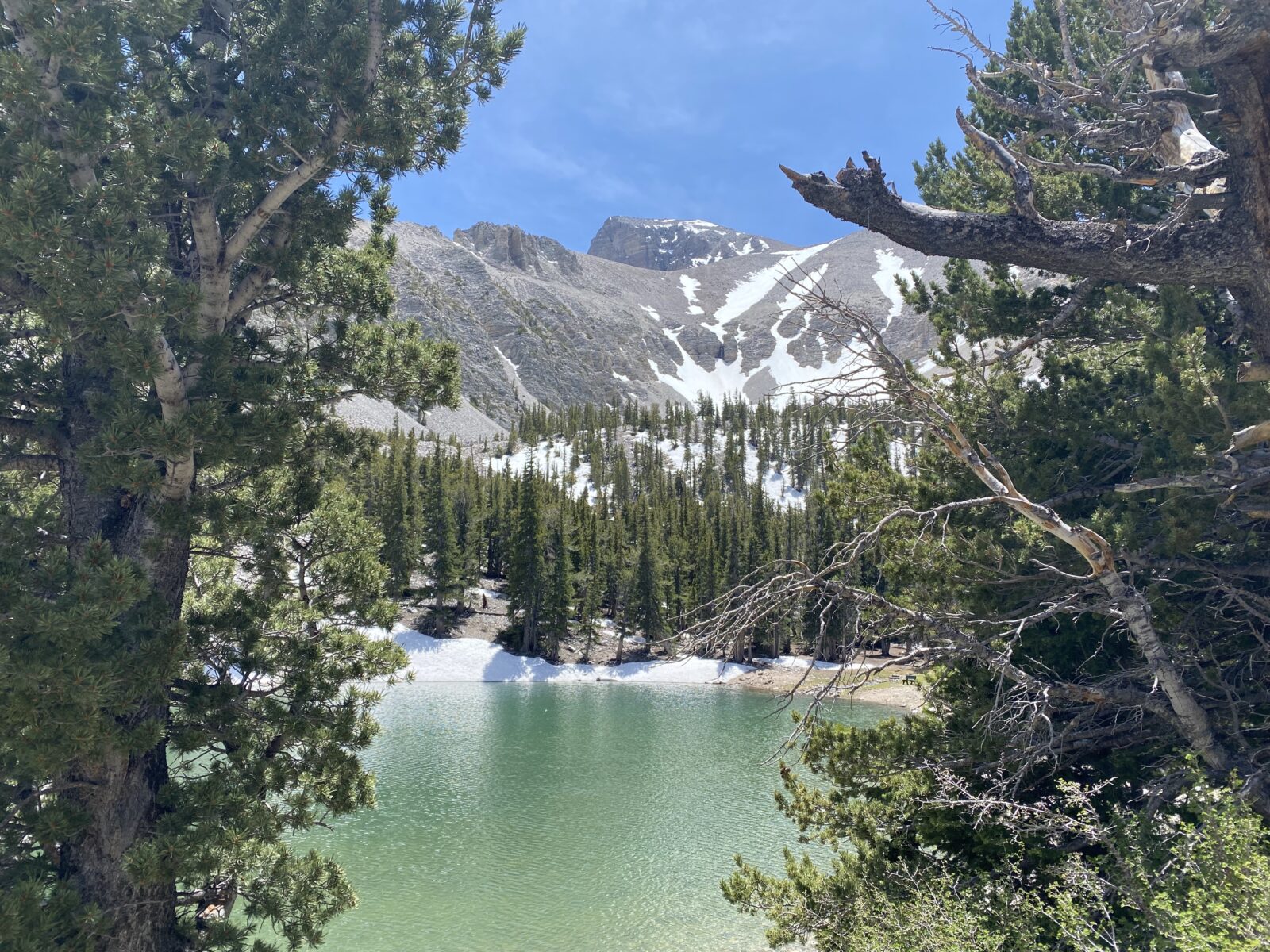 Liz Woolsey wiped down the counter at her general store.  She just re-opened in March from a long cold winter.  Her husband James is the Superintendent of Great Basin National Park.  Her store is a perfectly curated mix of food, wine and gear all reasonably priced and beautifully displayed and appears to be her passion project ; perhaps the price Mr. Woolsey pays for dragging his bride around the world, one remote national park assignment at a time.

Liz is also the proprietor of the adjacent Stargazer Inn, colorful and hip accomodations for the non-camping crowd.  Her first vibe changing act was to rip the televisions out of the rooms.  “You’re here for a night or two.  Embrace nature,” she said.  Pam, a quasi-local, sits at the counter agreeing completely, nursing a coffee in dusty clothes.  She is currently house-sitting in Baker but lives off-grid in the outskirts of town.  Pam’s family is in Maui and she spends some of her time there, but her heart is in Baker.  It is hard to imagine picking Baker over Maui having been to both.  Then again, this place does have a certain pull.

We were purchasing a red onion and a bottle of red wine which sparked a back-and-forth on cooking, then books, and finally water rights.  Liz and Pam know everybody by name in Baker.  It is the Baker family that has turned off the water at the National Park through a series of legal actions.  Liz loves them and all they do for the town named after them but we can see that this last action troubles her.  Sheri adds, in her typically straightforward fashion, that the Visitor Center should stop showing the 2013 movie that depicts the Baker family as champions of the park.  It’s not right that American taxpayers can’t get water at the campsite in their National Park.  Water rights makes enemies where once there was harmony in the Great Basin.  That is a theme that extends throughout the west.

Eric, in his typical sarcastic fashion, chimes in that he is working on a feature article about finding a soulful escape in the Great Basin that will hopefully go viral and make Baker the next Marfa.  Liz and Pam wince knowing Marfa well and mourning its demise as an authentic lonely place.  “It is all California millionaires playing cowboy now.”  They agree that it cannot happen to Baker because no families will sell their land.  We ask about the converted railway dining car, artist studio and log house for sale around the corner for $600K that just needs plumbing and a world of other things we guess.   “Ridiculously priced and will never sell,” they agree.  That’s what everyone said about Marfa.  People are looking for a different way of life; a way to escape progress or to participate in the birth of something new.  All the rivers have been navigated, the lands explored and settled.  The modern pioneer wants to create a new vibe with like-minded people in a place no one has heard of and are willing to pay up for it.

Great Basin National Park is a dark-sky haven for astronomers.  At 8,000 feet in the thin dry air, the Milky Way is clearly visible.  An astronomer docent from Illinois hosted a star gazing event at the park amphitheater just like he has been doing every summer for the past ten years.  A modest crowd of families from all over the United States fake laugh at his corny jokes and not fake sitting perplexed (and bored) by his description of how the latest gravity wave finding NASA telescope works.  The kids (and Sheri) just wanted to know why the moon looks like Swiss cheese.  Eventually the Power Point ends and we can look at the stars.  And what a sky that we’ll never see as part of our daily lives.  You have to live somewhere without neon, Walmarts, communities, basically civilization.

We overheard a park ranger talking about the Alpine Lake hike, that it was about 3 miles roundtrip with only 500 ft of elevation gain.  After back-to-back 6 mile high elevation hikes, we took the break and followed four twenty somethings to Stella Lake where they washed their hair and shared the stories of their epic roadtrip from San Francisco to Vail, hitting Capitol Reef, Great Basin and Lake Tahoe on their way home.  They hadn’t had a shower in 4 days and 50 degree alpine water was no excuse not to wash the dirt right out of their hair.  We invited them to the giant Flagstaff 5th wheel in their campground for Happy Hour but they indicated that while they were filthy, tired and out of food, they did have a full supply of Coors Lite and Fireball.  Of course they do, they are twenty-something.  What were we thinking?

Everyday we hike then relax in camp, reading books and improvising recipes with the last of the food in our pantry.  We’re down to the last ingredients to make a so-called meals.  There’s a decadent pan of brownies with a can of sweetened condensed milk and staples from the baker’s box.  Salsa from a can of plum tomatoes, seasonings from the spice box and the red onion from the Woolsey store.  We’re living our own episodes of Chopped, where the challgenge last night contained basmati rice, a carton of beef broth, a can of condensed cream of mushroom soup and leftover ribeye from the prior night’s steak and Caesar salad.  For an odds and ends casserole, it was really delicious.

Thursday through Saturday, Sandra serves up Mexican from her food truck in town.  Friday is special because in addition to the standard fare, she has homemade tamales.  We recognize Arjun in line in front of us and his loaded road bike to the side.  He was pushing hard on the pedals up the 8 percent grade to the campground yesterday looking for a campsite when we offered and he declined a ride to the top.  Arjun is on a 3,500 mile ride from the Bay Area to Boston, this stretch on America’s loneliest road, Route 50.  He’s a good lunch companion with a big story of recovery in the aftermath of life-changing injury. Again, he will not accept a ride across the Basin, but he will agree that the tamales are the best.  People we meet on the road all have a story, many taking a break from their regular life to reflect on what’s next.  The Great Resignation, American Redoubt and Pandemic Pause are all trends we see in action.

The Pandora moths have arrived in force in Great Basin.  It might be related to the hot temperatures that have rolled in with them.  The nights are no longer cold.  The day temperatures touch triple digits. It is as if Mother Nature is telling us that we have over-stayed our welcome.  Adding an exclamation point to the message, a couple out of Reno has settled into the campsite nextdoor giving us neighbors.  These neighbors are here to stream Netflix over their Hot Spot, so they say.  To each their own we say until their 3 KW generator kicks on all day long to supply the juice.

The spell is broken but at least we have our memories of Shangri-La.  Soon we will head north to chase cooler temperatures and east to chase home.  California with its 7 dollar a gallon gas will wait for another time and perhaps another rig.  We have learned so much about RV’ing in remote places and size is not your friend.  We laugh thinking about our attitude three years ago when we wondered if 30 feet was large enough to hold all that we NEEDED.  Need is a funny concept.  It really does depend on your perspective and experience.