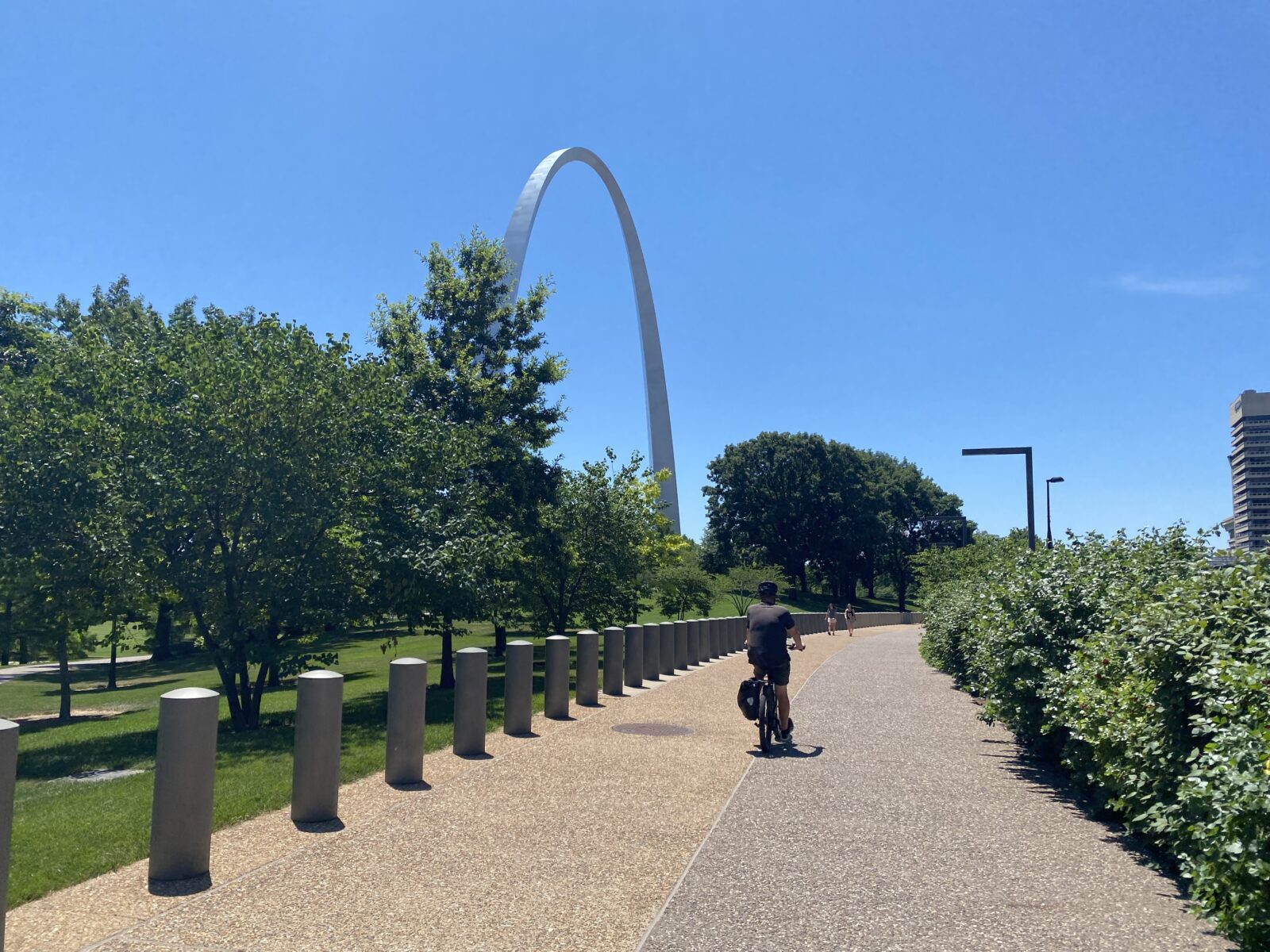 Not a sole can tell you, not even the Google, why a manmade steel structure sitting on 90 acres of city park was designated a National Park in 2018. Did it have something to do with the Senators from Missouri who sponsored the bill, Blunt and McCaskill? Was it because it’s former name, The Jefferson National Expansion Memorial, was so bad that emergency re-naming action had to be taken? Your guess is as good as ours. We have recently been there and as towering, impressive and shiny a monument as the St. Louis Arch is, it’s no National Park.

If there were a contest for ranking Visitor Centers on style, substance and sex-appeal, Gateway Arch wins hands down among ALL National Parks. It is the Jaguar E-Type of Visitor Centers. Underground, crisp white and concrete mid-century design houses conquer-and-harness American West history without detracting from the sexy curve of the above ground arch.

This visitor center is a tour de force in American history education. The center’s message is an unabashed, unapologetic monument to American exceptionalism. Granted, we had to cut a few legal corners from time to time in our expansion of the country from Atlantic to Pacific, but just look at how awesome these lower 48 states are now. Totally worth it. Would you be happier if President Jefferson did not (illegally?) purchase half of them? Do you wish President Polk had not (illegally?) started a war to get the rest. Would we be better off if France and Mexico had kept all of America west of the Mississippi? If you cannot see this point of view, this may not be the National Park Visitor Center for you.

The Gateway Arch was built when America built great things and we don’t mean things like Twitter or Dogecoin. We mean cool, powerful, monster things like Saturn V rockets, 2000 mile long interstates and a 630 foot tall stainless steel Arch. It is both a work of art and a wonder of engineering. The documentary that memorializes the construction leaves you breathless.

Come on America. Let’s get back to building cool stuff and stop pouring all of our talent into making the next Tik Tok app. The Arch will move you to go back to school and become an architect, engineer or steel welder so you can build something to last. It is that inspiring.

Case in point, the view from the top is 30 miles, but the ride to the top is mesmerizing. It is not an elevator exactly but a small Art Deco barrel compartment that you jam yourself and three friends into for a four minute claustrophobic adventure up the curve of the Arch outfitted with a glass door so that you can see the crazy engineering inside the Arch holding it together. It is 60’s Jetson’s mid-century magic and you will never want to take an elevator again.

At Gateway Arch National Park young people in blue polo shirts are constantly taking your picture in front of a green screen and then trying to sell you a picture of yourself in front of the Arch. Have they never been to Great Basin, Yosemite, or Rocky Mountain? That is “I rode the Flume at Six Flags” garbage, not National Park behavior. Nevertheless, everyone except Sheric purchased one.

Our “See Everything” $42 per person combo package came with a ticket to the documentary, a ride to the top of the arch and a Mississippi River paddle boat tour. Of course it was not a paddle boat and the not-a-paddle-boat company had no obvious affiliation with the National Park. If had been called the Huckleberry Fin Paddle Boat ride at Six Flags Gateway Arch, it would have made more sense. Perhaps pioneering new concepts in consumerism is part of a new National Park Service. Let’s hope not.

Despite the fact that this was a not-a-National-Park National Park visit, we had a really good time. The Gateway Arch can be the gem of St. Louis to its residents, or represent Thomas Jefferson’s vision of a new continent-spanning nation, or symbolize the settling of America’s last frontier, or all of those things. It is so beautifully designed and constructed that it is a great backdrop for the highest of aspirations. Perhaps that is why we saw wedding parties posing on the steps and families hugging close together at the top for selfies. A destination does not need to be a National Park to inspire a love of all that is best in America, but … it is a National Park, so there.

Where would a Como tour of St. Louis be without a tour of the seedy and the flavorful. We launched the adventure from the RV camping slash parking lot of the Draft Kings Casino on the far side of the Mississippi River just 2 miles from the Arch. When you are in a city with a rig over 50 feet in length, there is nothing that substitutes for spacious convenience. If we feel lucky, we may put Roxie on Red.

Once again the Comos proved perfect for city exploration and had no trouble getting us to the highest rated St. Louis style BBQ in town at Pappy’s. Blessed with moderate temperatures, we digested the meaning of American exceptionalism and exceptional BBQ all at the same outdoor dining table up town. Licking our fingers, we were very glad that this one-of-a-kind National Park had stayed on our list. Sticker please.