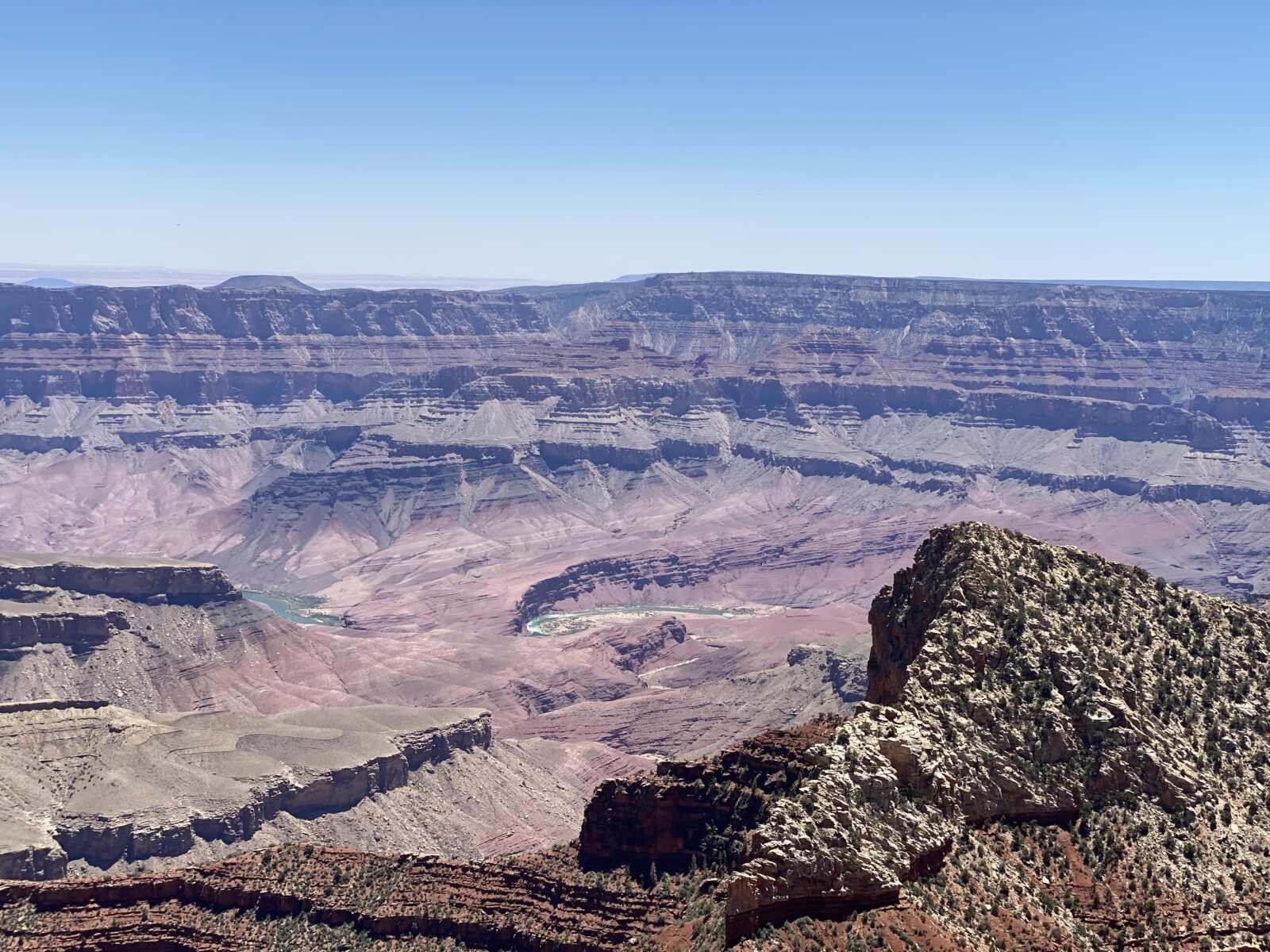 We didn’t go to Grand Canyon’s North Rim to get the sticker. Technically there’s not a separate sticker for the South Rim and the North Rim and we did the kit and caboodle at South Rim a few years back. We went because it’s the Grand Canyon, duh, and all Americans basically have to go if they get within a 60 mile radius.

In order to build suspense for the big reveal at the North Rim, the 44 mile ride from our campground at moth-infested Jacob Lake through the Kaibab plateau is extra boring. It is as hypnotic and uneventful as driving across Kansas, except replace corn with pines. A few mountain meadows are thrown in along the way to break the monotony or at least trade one monotony for another. In National Park fashion, the two lane road is a well paved glide to the visitor center. Even as you park in the lot next to the lodge, there is no hint of what lies behind the tree line.

When you break past the thick forest line the Grand Canyon vista hits you in the face all at once. You think, “what am I supposed to do with this? How long should I stop and stare? Is there any particular thing to stare at above the rest?” It is very confusing. Beautifully paved and lined National Park trails extend paths along the rim to provide even more views of pretty much exactly the same overwhelming thing. The Grand Canyon is massive with countless side canyons and side canyons to the side canyons that fill the scene. It is all at such a scale that it is impossible to categorize in your mind.

The prevailing story says that the Colorado River cut the canyon gradually over a period of millions of years. From the North Rim, the Colorado River is barely visible. Only a short stretch around a tight bend can be seen because the North Rim is 1000 feet higher and 6 miles further back from the center of the canyon as compared to the South Rim. It is amazing how quick we believe what geologists tell us. From a purely rational point of view based on everyday experiences with rivers, the Colorado looks way too small to have done what they claim it did.

They say the Glen Canyon Dam 200 miles upstream has tamed the Colorado so that its current from is unrecognizable from the beast that carved the canyon. Tamed or not, the job of cutting the canyon out of the Kaibab plateau looks impossible on any time scale to which we could relate. The Grand Canyon forces you to contemplate geological change on a scale far removed from everyday life.

In the end that is what makes a visit to the Grand Canyon so problematic. Unless you are willing and able to spend a few days hiking down the trail to Phantom Ranch at the bottom, it is difficult to relate to the canyon. It sits like an enormous still life painting thrust in front of you. We overhead two 8 year old boys returning from the short walk to Bright Angel Point exchange the following: “I’m bored, we haven’t done anything,” said one. “Me too, but we sure came a long way to do it,” said the other. For kids that have seen immersive CGI in countless Marvel movies, a big landscape is just another scene.

From the mouths of babes comes a good summary of our confliction with how to process the Grand Canyon. The picturesque lodge provides ample Adirondack chairs in which to relax and take in the view. The menu was National Park generic, nothing bad but nothing close to matching the view. Cute as a button cabins provided quaint if tight accommodations to hang around for days.

Nostalgic pictures hanging on the wall of the lodge told of a time when lodge guests put on variety shows reminiscent of scenes from the film Dirty Dancing in the Catskills. Perhaps they were on to something in the 30s, 40s and 50s. It is good to have something to do in between landscape gazing. All of this begs the question, “How long is the right amount of time to take in the view?”

For us, four hours about did it; for Clark Griswold it was 3 seconds. The grandeur of the scene makes us self-conscious that four hours was not long enough. It was long enough for us. Perfect roads and a big truck made little work of winding between view point to view point. A well maintained dirt trail from the lodge to the campground provided a healthy stroll in the mountain air with a canyon view the entire time. Yet we still could not say we experienced the Grand Canyon.

We took a lot of pictures. We saw it from a lot of slightly different angles. We could certainly recognize it if we were to see it again. But it is not a thing you feel in your hair, or beneath your feet, or hear its call, or tactically interact with. Maybe it is enough to have said you’ve seen it. Maybe the experience is that WOW! Moment when you first see it in its monstrous enormity. If that is the case, then give us another sticker. We did it.