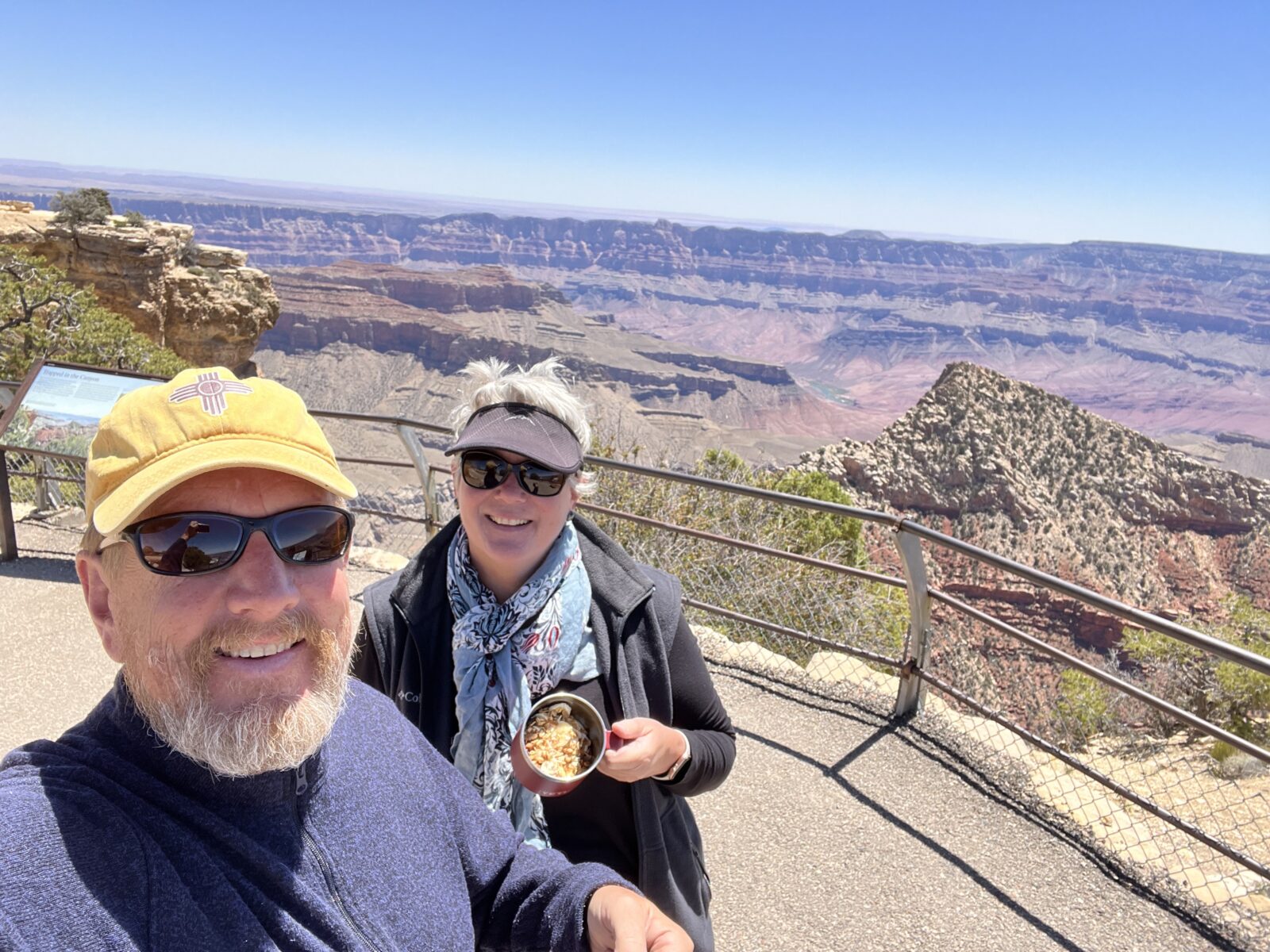 The thing we like most about our birthdays is that they are back-to-back. In thinking about what to do for the big 55/60 we decided to be ourselves, come out of the woods and do things that were both enjoyable and essential to furthering our adventures. For Eric, that’s pickleball, clean truck and a cold beer. For Sheri, that’s mani/pedi, thrift shops and a margarita.

The Jacob Lake Inn is famous for their homemade cookies but for us it was the only place to escape the Pandora moths. On 60 eve, we dined in the Navajo blanket inspired restaurant ordering the house specials of The Grand Bull Sandwich and Grilled Salisbury Steak with a skillet chocolate chip cookie topped with soft serve swirl for dessert. The menu items sounded a lot better than they looked on the plate. They tasted about how they looked. The Inn’s cookie booth, convenience shop, and grill staffed by very polite teens were packed with customers, likely because any alternative choice was 30 winding mountain miles away.

Happy to flee the moth invasion, we did a 7am departure, moving 77 miles west to Hurricane, Utah where we parked Roxie next to City Park and got in two good games of Pickleball with our new friends Trevor, Cassie and Bryce. Happy Birthday Eric! Pickleball is primarily a social game where pick-up, or open play is the norm. When was the last time you played sports with strangers?

Sand Hollow State Park is on a man-made lake just 30 miles from Zion National Park. Hurricane has all the conveniences needed for small town quality living … a library, a BBQ joint, a cineplex playing Top Gun Maverick every 20 minutes. After posting at the library next to two teenage Mormons studying scripture together, we hit the 2:40 showing with a large popcorn layered in fake butter and a giant Diet Coke.

Movies are movies and life is life and never the two shall mix. Top Gun 2 teaches you that compared to real life, you can count on a movie to get it wrong. None of it made much sense. And we are not talking about the fighter pilot attitude nonsense. At least they had a female pilot that was not simply a love interest of one of the guys. Too bad her backstory went no further than her callsign Phoenix. The real head scratcher was the character Penny. Who owns a bar on Coronado Island along with a J/125 racing yacht, a 1970 Porsche 911s, a cottage right on the beach and is single waiting around for an old flame? Let me repeat – this is on CORONADO ISLAND, San Diego. The heck with Maverick. Penny is who we want to be.

If you want a lot of popcorn but don’t want the guilt of eating it all, go with the layered fake butter approach. We got through about 1/3 and trashcanned the rest in favor of brisket and pulled pork at Lonny’s BBQ. It’s here we noticed the trend of the teenage workforce running Utah. From Jacob Lake Inn to Red Dirt Car Wash and Lonny’s BBQ, shiny bright happy teens were at the ready to serve with a smile. Sheri discovered the best ever BBQ Bowl – a scoop each of mac and cheese, red smashed potatoes and baked beans, covered in pulled pork and topped with cole slaw and barbecue sauce. Patent that.

Sheri’s birthday was a lot like Eric’s. After a spin through the car wash and 2 games of Pickleball at the Little Valley 24 court Pickleplex, we split a Jimmy Johns regular turkey sandwich with chips. While Sheri got a mani/pedi, Eric did 4 loads of laundry in one machine (efficient!) and together we hit two thrift stores and refilled the propane, gas tank and stash of wild sockeye salmon from Costco. Hot stuff! Compared to swatting moths, it was damn good.

For the margarita we had to go to the Utah state run liquor, wine and beer store for the tequila and Walmart for the Simply Lime and a last chance cheesecake for dessert. They scanned Eric’s driver’s license to record his tequila purchase, which we thought was odd, considering an 18 year old can buy an AR-15 without that level of oversight. That’s America – afraid a can of beer may fall into the wrong hands but not a semi-automatic rifle. Not to get too political, but even a card carrying NRA member can see the irony in that.

At the end of the three day 55/60 birthday bash we both felt fat and happy. At the last minute, we secured a cancellation in Zion for the weekend. We’ve been there before, but missed one of the classic hikes due to high water conditions. The drought has fixed that, so we are off to check that hike off the proverbial list. For the record, we don’t keep a list, or at least Eric doesn’t.

Does 55/60 feel different? We have to admit we are a step slower, and those steps are often a little painful in the morning. We are officially older. There is no way this can pass for middle age unless you think people live to 120. It also feels good to be out on the road seeing America. At this advanced age we are wise enough to know not to take it for granted.