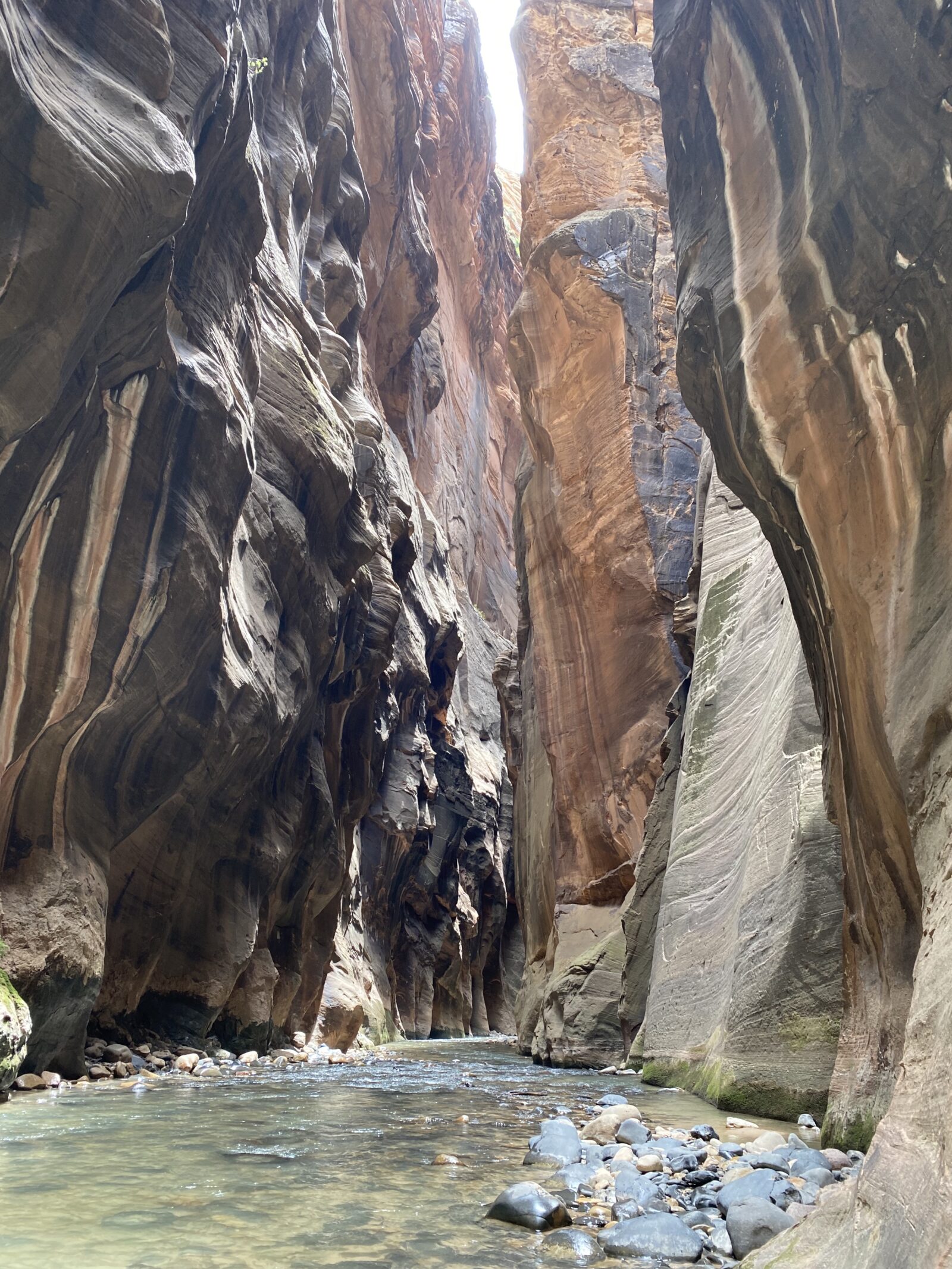 International travel is back.  In our two days at Zion National Park we were English speaking minorities.  Surrounded by a cacophony of Asian, European and Latin tongue, had we not known we were in Utah, we could have been anywhere else in the world.

Last time we were in Zion, one of the “10 Best hikes in America” was closed due to high and fast moving water.  It’s nearly impossible to get weekend reservations unless you book a year in advance.  Back in the area, we lucked into two consecutive cancellations in two different sites of the Watchman campground to tackle The Narrows.  If we would have applied that luck correctly, we would have been Megaball winners.

Home to The Narrows, Sinawava Temple is the last of a dozen stops from the visitor center on a tram ride into the Zion Canyon.  Since cars are not allowed but e-bikes are, we rode our Comos nine miles from the campground to avoid being stuffed into the bus. The hike to The Narrows river-wading adventure starts with two paved miles on the Riverview trail.  Those who don’t wade, meander, feeding and petting fat humanized squirrels and taking selfies above the water.  By 9:30 we were feet wet in the Virgin River heading upstream in search of a narrow passage called Wall Street.

Hiking up the canyon is a bit like walking on bowling balls for a few miles.  Many, if not most of the bowling balls are covered with water.  There is no marked trail but people tend to follow the people in front of them so it looks like a line of ants.  The difference is that ants don’t come stomping along determined to pass all of the ants in front of them.  On The Narrows hike it’s the norm.  No matter how fast you are hiking, someone behind you is determined to hike faster, like there’s a prize for the individual that completes it in the shortest amount of time.

Three hours and three miles into hiking on rocks in 60 degree water we began to wonder if we’d reached Wall Street.  We asked hikers going both up stream and down stream.  Those whom had been further upstream declared that everything further upstream was basically what it looked like now.  Those that were passing us coming from behind were hoping that we would tell them that this was in fact the destination so they could turn around.  Realizing that we were as much an expert as anyone we OCCUPIED WALL STREET and turned around.

By mid day the crowds had arrived at The Narrows en force.  The current of water carried us down stream.  The massive current of arriving hikers blocked our path.  Heads down and feet stomping up the river, they came at us like charging bulls.  The Narrows Hike was an International expedition.  We quickly came to the realization that trail etiquette did not apply in these situations.  Since we all spoke different languages we all resorted to the universal international language, body language, to clear a path in front.  We saw a large man go face down into the river as he attempted to shoot a perceived gap in the defensive line.  Game on.

To say that it was miserable is an understatement.  We were so busy looking down at the greased bowling balls or leaping out of the way of raging bulls, there was little time to enjoy the surroundings.  For a brief moment we had the canyon to ourselves.  We thought that perhaps a shuttle bus had suffered a blown tire and a slug of hikers had missed their gate time.  In that moment the canyon was spectacular.  Not as tight as Buckskin but impossibly high.  We cherish that memory.

And now for the rant.  America’s most popular National parks are way over crowded.  Between COVID pushing everyone to the great outdoors and the National Parks becoming an international destination, the number of visitors has exceeded what the parks can and should support.  The capacity of the lodges,  campgrounds and trails have largely remained unchanged since the parks’ inceptions.  The difference now is that they resemble your basic overbooked Southwest flight to Chicago.  You may get there, but it will be a  miserable ride.

It is not an efficiency problem.  Moving camping reservations to online-only made the problem worse.  Natural beauty, serenity, wildlife, and wilderness cannot be experienced in a throng of humanity. Unless construction of another Zion Canyon is in the works, rationing needs to take place.  And for the average young family with a Subaru, an REI tent and a free week next month, those parks will not be visitable – and that’s a real loss.

Back at camp we made plans to exit Zion.  No further cancellations had popped up and honestly that was just fine.   We’ve come to accept that adventuring is not all about the attraction itself. It’s how you experience the attraction that makes or breaks it.