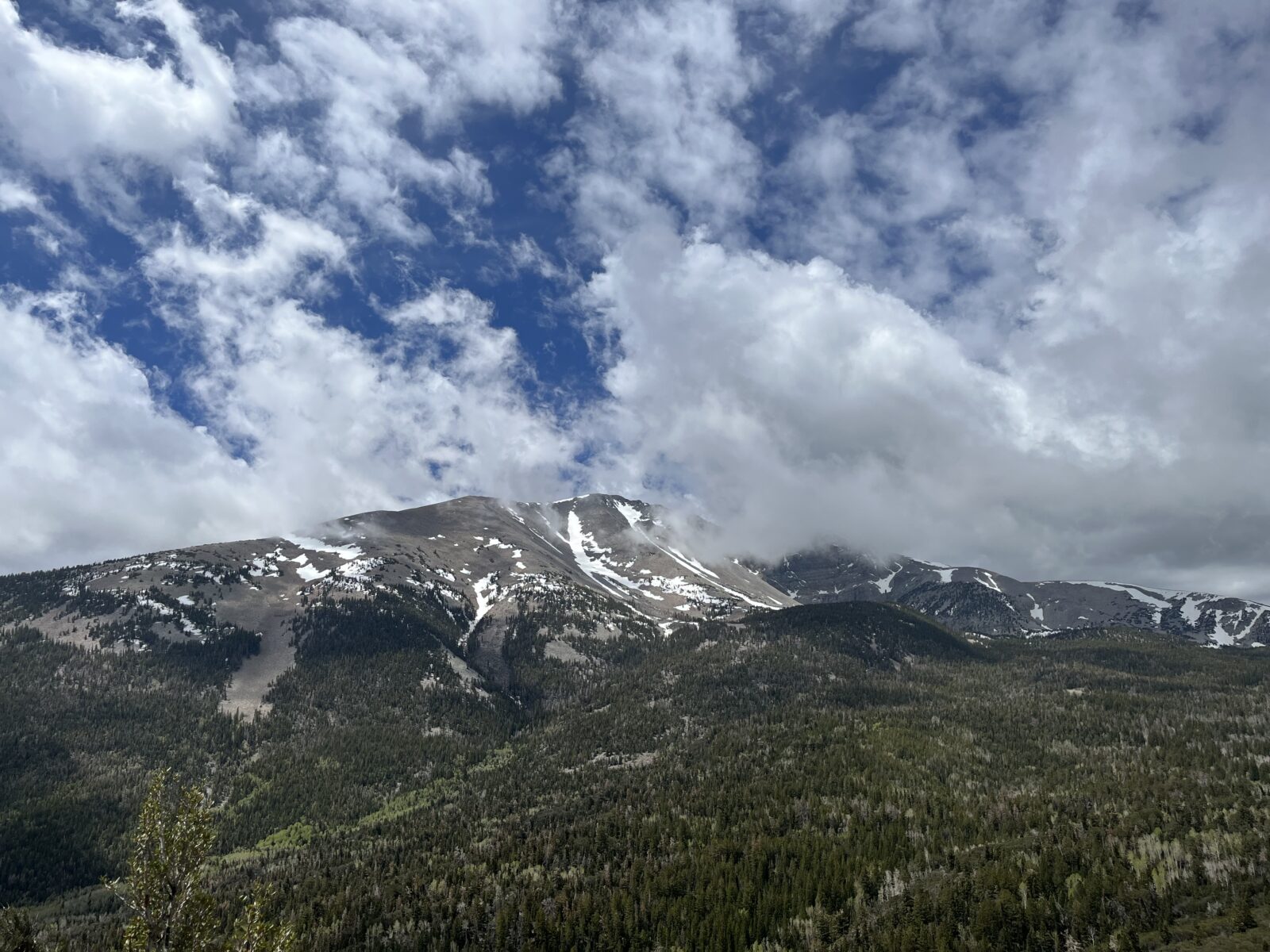 Feeling sore and annoyed from Zion madness, we pulled the proverbial plug and headed north on I-15 toward Salt Lake City to begin the journey home.  Three NP stickers in 2 months plus slot canyons, lost canyons, Macklemore, Overland, trout, moths, birthdays, anniversary and 43 blogs – it felt like we’d done enough, experienced enough to call it.  But then there was Great Basin.

That National Park, all alone in the northeast corner of Nevada.  100 miles from services in any direction.  When would we be less than 200 miles away again?  The sticker.  Would there be coulda, woulda, shoulda, didn’t remorse?  With bad attitudes and no reservations, we turned west and with each passing mile negative headspace started to clear and minds began to wonder.  What is this place?

A lone sign read no services for 96 miles.  That was an understatement.  There were no cars, no people, no businesses, no towns.  Just a single striped ribbon that stretched to the horizon, bordered by fields and mountains.  Where are we going?

Five million people make their way to Zion each year.  Great Basin gets less than 2% of that.  If we had not been chasing stickers, we would have never heard of it, much less visited.  If West Texas is “lonely places”, this place is Tom Hanks in Castaway without Wilson.  Hit the visitor center to check the box and maybe make Salt Lake by evening?  Why stay in this place?

Google Maps said the visitor center was straight ahead. The signs on the road said to turn left.  Who knew there were two visitor centers?   We arrived at the wrong one.  A small cave system discovered by a guy named Lehman lies fifty feet under the mountain range we had just ascended on the drive in to the wrong visitor center.  The Lehman Caves get their own visitor center where rangers spend their days moving visitors through a cave.  They had important information for us.  The cave tours were full today.  When we inquired about camping they informed that there is no camping in the caves.  Eventually we figured out that this visitor center was all about how to get you into a cave.  Great Basin visitor center was a few miles away.  How did we miss the place?

And then it happened, that turn of events we have come to expect when we stop over thinking, over planning, and over worrying. That time when it all comes together through no effort of our own.  It had been an early morning Zion exit and a long drive.  We had made a dubious decision to travel 200 miles out if our way and drop by Great Basin with no reservations or plans.  At the end of the drive we dropped by a cave instead.  Sheri somehow managed to get the ranger off her preferred topic of caves for a minute and asked about any possibility of spending the night on BLM nearby?  The ranger responded that we could check out the first come-first served campground up on the ridge line if we wanted to, but to make a cave tour we would need to log in to www.recreation.gov.  What was that first part?

We returned to Roxie and Boss hauled her five miles up a cinder road to a barely accessible campground at 8,000 feet on a ridge line overlooking Baker, the basin, and everything below.  We parked Roxie on a prominence with a clear view of the valley below and snow capped mountain above.  The only sounds were of birds, wind and a mountain stream.  Mountain flowers dotted the alpine landscape.  It was probably the best camping spot we had ever found – ever, of all time.  Yep, that good.

With Roxie parked in what looked like a Flagstaff advertisement for the great outdoors, we hiked above 10,000 feet for the first time in a long time.  Snow was still on the ground and a glacier sat on the rocky cliffs above looking down on a grove of bristle cone pine trees that have been living since BC changed to AD.  They are the oldest living things on earth, some as old as 5,000 years.  We walked among the ancients in the cold mountain air with our boots in the snow in awe of how we got here.  No crowds.  No mayhem.  No lines. No endless selfies.  No reservations.

In a crazy twist of fate which seems a lot less crazy when you have been on the road awhile, we vowed to not leave this place until we ran out of food or water.