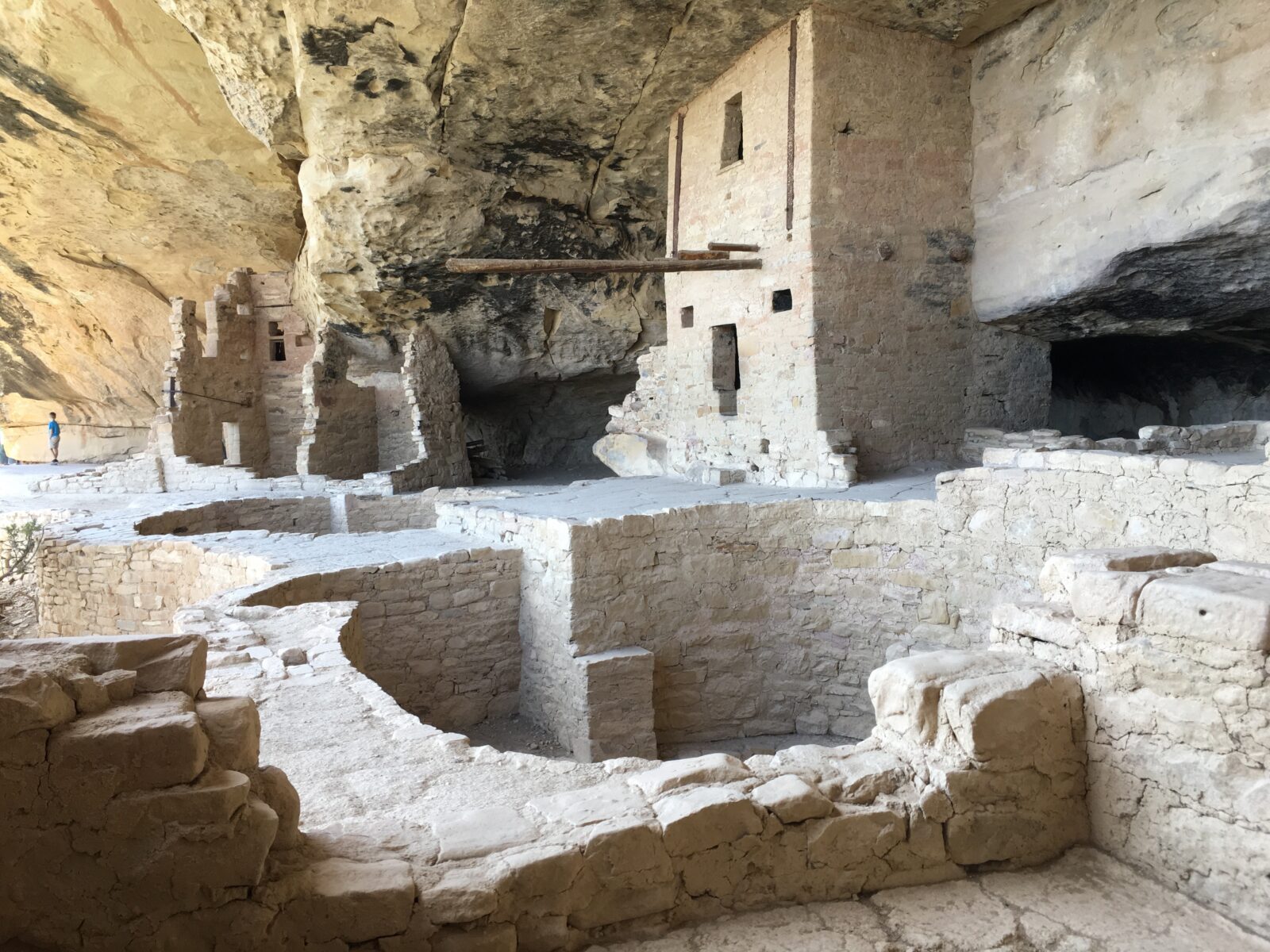 Around 500 CE, the indiginous people of Colorado’s Mesa Valley region were living in underground pit houses and growing beans, corn and squash on a huge mesa at 8000 feet elevation. After a few hundred years, someone thought to climb down from that mesa and literally carve out a life on the cliffs out of the shear sandstone walls.

Around 1200 CE, having fully developed the cliffside housing market of the mesa, they departed without a note or explanation as to why. Today Mesa Verde is a National Park bringing in thousands of property hunters to scout out a condo with a view.

The park rangers are quite up front about it – the archeologists are just guessing as to the fate of the pueblo people of Mesa Verde. They have lots of theories but no concrete why. With that in mind, we signed up for back-to-back ranger tours with a bunch of friends from all over the world, starting with Cliffside Palace and Balcony House, two of the hottest properties on the mesa.

Leaving Utah, we followed the snow covered Rockies into Colorado and spent the night on the south side of the mesa in a wonderfully large and dry campground inside the park. In the morning, Betty tunneled and climbed an extra 3000 feet up a 20 mile snake-of-a-drive to the more desirable cliffs to the north.

The approach lacked curb appeal due to multiple devastating fires throughout the centuries. Ranger Ben said they tried seeding, but the soil is so damaged it may take hundreds of years to recover. That doesn’t sound good for cliffside property values. Landscaping is the first thing a new buyer notices!

At Cliffside Palace, Ranger Ashanti showed us around the 60 room dwelling talking foundation-materials-construction, getting in and out, eating-sleeping-toileting and community life. Pre-flip, the palace was crumbling but the restoration project made it move in ready. The 100ft drop from the Mesa while carrying groceries from the field could get tiresome. Trash and sewage go over the side of the cliff. We were beginning to sense that there might be some zoning infractions.

The Balcony was a lot like the Palace, but it had more pits. Since they knew how to live underground on the mesa, they built underground pits on the cliff. Neither Ranger knew why their building methods failed to evolve beyond the pit and the tower, saying no one wrote anything down so they can only go by what they see. The pit has lost favor today with most people preferring a sunken living room at most. Could it make a comeback?

After the ranger led tours, we rode the Comos 8 miles around the Mesa Top Loop to see displays of pit houses over the centuries. Basically, they got bigger and deeper but no matter what the size, they maintained that wonderful open-concept feel. She could grind maize in the kitchen while he skinned the mule deer in the living room all while both watched the children play in the bedroom.

In the end, it was not that tough a call. We decided, like the Pueblonians who fled 700 years ago, to pass on making a down payment on a cliffside condo. We thanked the rangers for our property tour, and asked when we could pick up the complimentary gift on our way out. They seemed confused by our response, which we immediately recognized as just another hard sell tactic. Save it Rangers – these savvy shoppers are onto you.