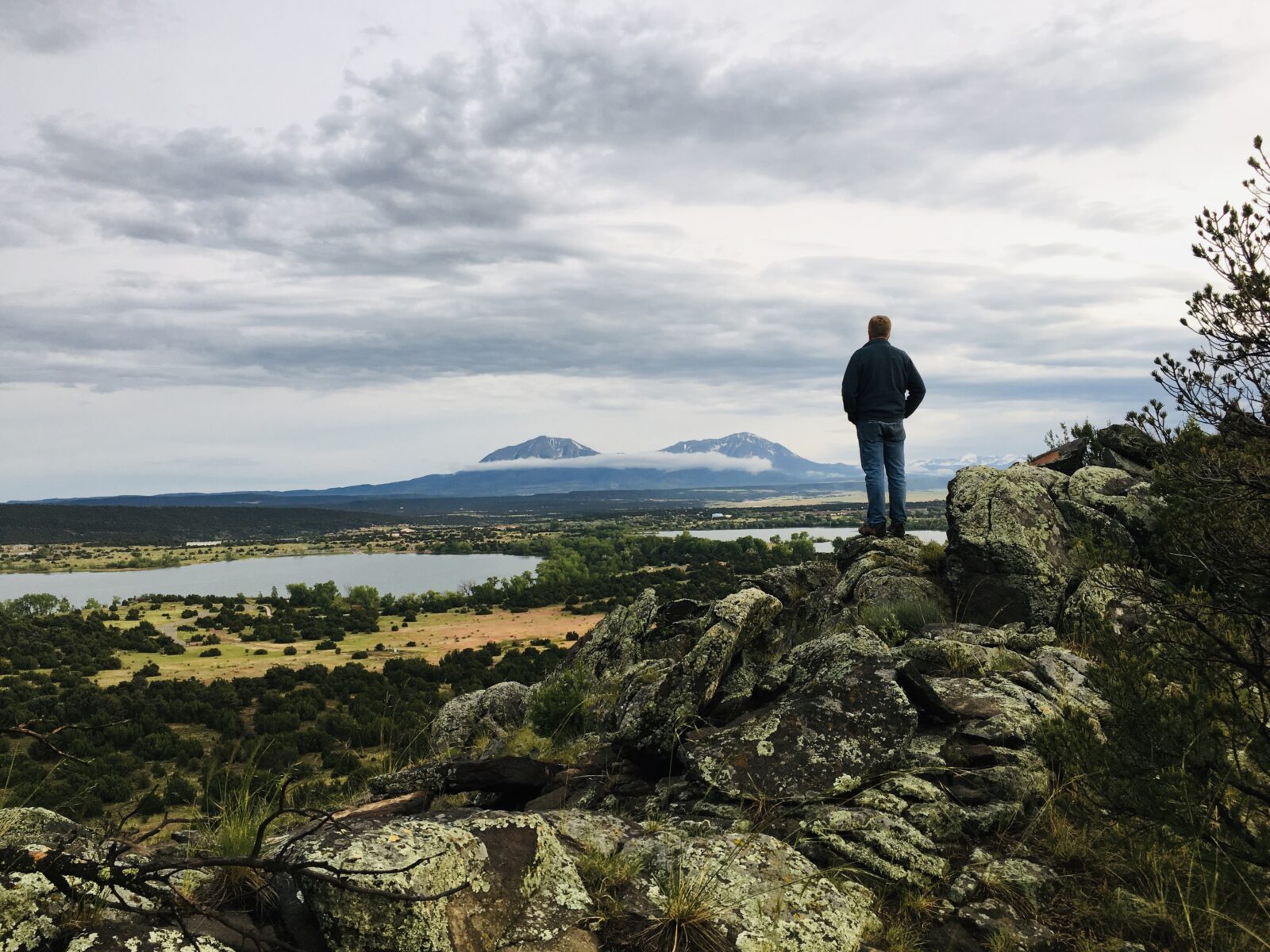 From “Life Elevated” in Utah, to “The Land of Enchantment” in New Mexico, it was time for a shot of “Colorful Colorado.”

On the one year anniversary of our retirement, we pulled up jacks and coasted off the mountaintop campground in first gear, slipping out of Santa Fe at dawn. We had 250 miles ahead of us – plenty of time to reflect on Meow Wolf, our last year of travels and tribulations and what provisions we needed at Walmart.

An hour up the road, we hit the Las Vegas strip: not the neon one in Nevada, but the virtually shuttered one of the same name in New Mexico.  We bought expensive gas, gaped at the depressed business district and shopped the Walmart, where we found Wanderlodge and expensive produce. This may have been an extension of Meow Wolf – if only this vintage bus was a portal to the Bellagio.

At the “Welcome to Colorful Colorado” marker, a high plateau offered an unending sea of light green while the Rocky Mountains to the west were tipped in white snow. We felt lucky to snag the last RV site at Lathrop State Park on Father’s Day weekend – only 6 miles off I-25.

The state parks system boasts a high-tech online-only reservation system that actually took an entire carne asada fajita and slice of tres leches cake lunch with multiple calls to the help line to lock down that site. Online only is a mistake, IOHO.  The system always appears sold out when in fact, many people just make reservations, never to use them.  Some percentage of sites should be left as first-come, first served to allow actual humans on location to use their common sense to fill the park.

The road to Walsenburg is more dismal than Las Vegas, where almost every storefront has a for sale sign, save the two pot dispenseries. Storms were rolling in and kamakazie bugs attacked our windshield as we rolled through town and into the park. A ranger with a “who-cares” attitude handed us a map and charged us an $8 entrance fee, for use of the road to get to the $36/night electric only campground.

The site made the wooded wonder at Ojo Caliente look spacious.  We finally had a chance to make use of the handsaw as we manually expanded the size of the pull-in opening so that the slides could open.  Watching black clouds roll in from the mountains, we decided to locate the showers, a luxury we had been without for three days.

The prison-style shower was coin operated.  Pumping quarters into the box resulted in a fine mist of luke warm water coming out of the water-saver nozzle.  A mob of 10 year olds banged on the door, thinking we were their hiding parents, who were actually huddled behind the 24 foot trailer one site over, vaping in solitude.  We misted ourselves clean as quickly as we could before the quarters ran out and the water shut off.

As we returned to Betty, the heavens opened up with wind, rain and hail.  At least our timing was perfect.  With sporadic cell phone coverage, we quickly planned our escape from Colorado.  With luck and an early start, we could make Wyoming on Sunday.

When the rain finally stopped and the kids took off their makeship trashbag raincoats, we put on our mudshoes to try to salvage the experience. Taking a dirt path through a cactus field, we walked to the lake where two fisherwomen sat quietly on the shoreline casting and reeling. Along the walk we found a trailhead to Hogback Loop – “a comtemplative walk in the quiet part of the park” – that would take us up to a ridgeline, down to the Ampitheatre and back to Betty by dark.

It was here, away from the depressing world order of Walsenburg, that we put our heads on straight and marveled in the colorful Colorado beauty, agreeing we needed to return and give the Utah/New Mexico treatment of weeks not day.

As we roll out on Father’s Day morning, the storm knocked out the fridge so we’re cooking all the bacon while drying out the books and iPad from the leak in the passenger seat wall. And it doesn’t bother us at all.