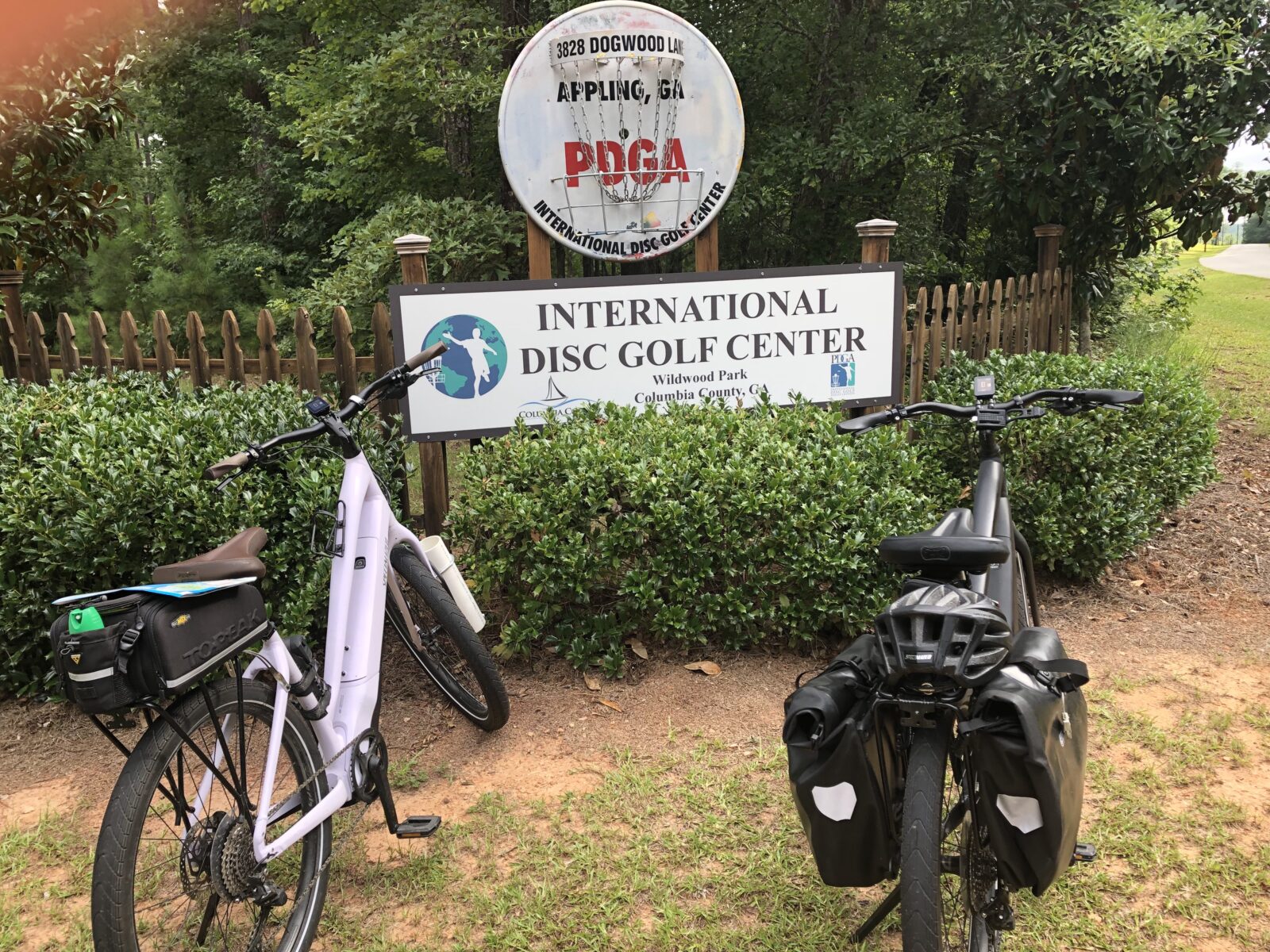 We were vaguely aware of disc golf, of course, but we did not realize that the epicenter of professional disc golf was a small town in Georgia and were compelled to check it out. Rolling 15 miles along Georgia back roads from Mistletoe into Wildwood Park we found the PDGA. Wildwood Park is a county park 5 miles outside of Appling, GA, and the friendly county employee waived us through the gate discounting the county fee from $5 a piece to $0 since we were just going to play disc golf. Tucked three miles into the park, a 2700 square foot club house is home to the International Disc Golf Center which houses the PDGA Hall of Fame, PDGA museum, PDGA pro shop, and a little kitchenette. We found Andrew the Intern taking a break from FSU and working the desk in the pro shop.

Once he warmed up, or perhaps overcame his shock from having two people enter the hallowed grounds, he was an eager ambassador of the beautiful game. Disc golf dates back to the 70s when it was played with a Frisbee. The Frisbee itself dates back to the 30s where it started life as a Frisbee pie pan. Today, disc golf is played with special discs, each similar in appearance, but each tuned for a unique shot, much like a set of golf clubs. We found that out, and more, from Andrew and the PDGA museum which has every championship disc displayed since 1973.

The PDGA Hall of Fame has three championship courses ranging in size from the 4600 yard “easy” course to the 9600 monster designed to challenge the top professionals. We chose the PGDA member #1 – “Steady Ed” Headrick Memorial, who personally designed the course which follows much of the wooded shoreline of Strom Thurmond Lake. We didn’t see a picture of Ed, but we think he must have looked like this above.

A beginner set of three discs is $25 – a driver, mid-range and putter. Having never played disc golf before, we bought one set to share. We found the biggest difference in the discs for us on the course was the color. In practice, we found that the putter seemed to work equally well as a driver, and a mid range iron worked just fine for putting if the person holding the putter was kind of far away.

At first, the game felt like a really bad decision to go play Frisbee in dense woods. Most throws ended in tree strikes just a short distance in front of us. After a few holes, the flow of the course began to emerge with narrow fairways appearing in the forest as we spotted pins off in the distance protected by natural hazards like creeks and thickets, just like golf. Eric posted an 81 on the PAR 72, admittedly from the short tees, which is a darn sight better than his golf game. Sheri parred two holes and don’t ask her about the rest.

Despite our score, we are sold on the game. It was a beautiful hike through the woods with breath taking views of the lake, and it was really fun when Eric sunk that 30 feet putt by curving the disc around the tree on the 6th hole. Now that we have added a set of discs to our athletic gear, we will definitely look for more opportunities to get out on a course.

The rain never materialized and the day had grown hot. We exited the park hungry and thirsty having played a championship course. The nearest, and only civilization, was Pollards Corner, a mere 5 miles away down a no-shoulder two-lane byway. Pollards Corner marks the intersection of SR 47, SR 150, and SR 221 in an odd five spoke design. Holding down the 221 corner was a Chevron and a Maryland Fried Chicken joint at 150. This was the second Maryland Fried Chicken we had seen in Georgia which we recalled simply because we commented to ourselves that we had no idea that Maryland was known for its fried chicken.

We ducked in the dilapidated building with the character of a chicken above the door for lunch. The clerk at the counter had no idea what made the fried chicken, Maryland fried chicken. She had just started two weeks ago having previously spent her time working the Chevron on the other corner. It’s a tight labor market at Pollards Corner.  In any case, she was happy to fill our mini-basket with two white, two sides, and a biscuit. It reminded us of being home in Maryland, except for the fried chicken, the weak air conditioning, and the dirty booths, table tops, and windows. I hate to say it, but I think Maryland Fried Chicken might not be the best ambassador for Maryland in Georgia.

After fueling up, we pedaled the 15 miles back to camp along SR150 in the hot Georgia sun. We made one stop at a quaint small-town hardware store to pick up an axe to chop some wood and have a fire later in the evening, and also because how cool is it that these ebikes can easily carry an axe.