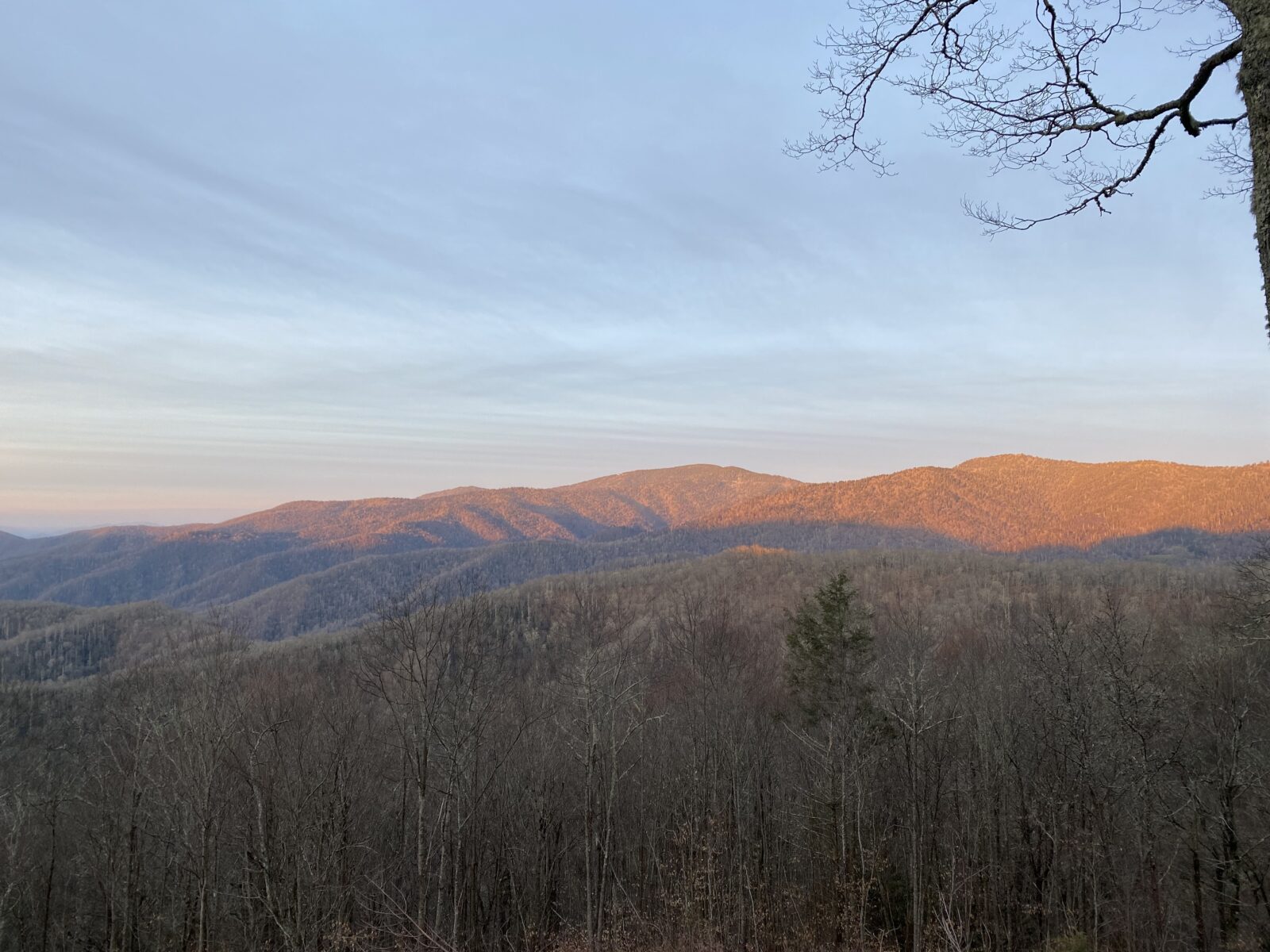 There’s no higher vista in Great Smoky Mountain National Park than Clingmans Dome.  6,643 feet.  Motorists make a 7 mile, 1,600 foot elevation climb on a paved and winding road to summit parking, then hike 330 feet higher for 360 above-the-treetop views.  Appalachian Trailers hike any number of miles through the woods to pop out at the base of the dome then peak up and get a drones eye view of their quest trek.  With the access road closed to cars Dec 1 – Mar 31, we called the sidelined Comos back into action.

Route 441 bisecting the park north and south was closed due to snow and ice at the higher elevations of the Newfound Gap when we arrived in the Smokies a few days earlier.  Overnight temperatures plunged into the teens.  We woke to find that our fresh water tank had frozen solid but the weather band radio promised a full day of sun and maybe 50s temps.

Leaving the fresh-water-frozen Roxie to thaw, Boss hauled the Comos, lunch and us up to the just-opened Gap at daybreak.  Remnants of snow and ice decorated the roads’ shoulders while traffic queued to get past the heavy equipment clearing mud and rockslides.  As we prepped to ride, our sole companion was a park ranger checking out the e-bikes to be sure we were not taking them on the Appalachian Trail.

The Clingmans Dome access road snakes along a ridgeline from the Gap to the summit, ascending 1000 feet over 7 miles.  We used 3 cells of electric help on the all-alone ride to boost our performance, making the climb at about 9 mph, stopping at overlooks to soak up the sounds of silence. Dramatic ice formations lined the rock-walled road.  How many more days would they last until the warmer temperatures took them down?  Folks waiting for the road to open would never see them.

The visitor’s center below the summit, sized appropriately for its role as the most popular park destination, was eerie in its emptiness.  We docked the Comos in the bikestand – the solitary vehicles in the large lot.

Appalachian Trail Runs Through It

A broad paved path as steep as a staircase ascended to the Dome.  We made liberal use of the 6 ‘time-out’ benches thoughtfully provided along the way to catch our breath.  At the summit, the wind howled.  We met a different breed of adventure seeker coming off of the AT.  Carrying heavy packs and often dressed in shorts, we wondered how they survived.

The exit was a dramatic, hands-off-the-brakes, 25 mph thrill ride back to the Gap.  When we returned to Boss, the parking lot was jam-packed.  Crowds mingled, shooting selfies from the low retaining wall.  We witnessed an engagement for a young couple.  If they only knew the world of ice walls, whipping winds, and sweeping vistas that lay beyond the locked gate.