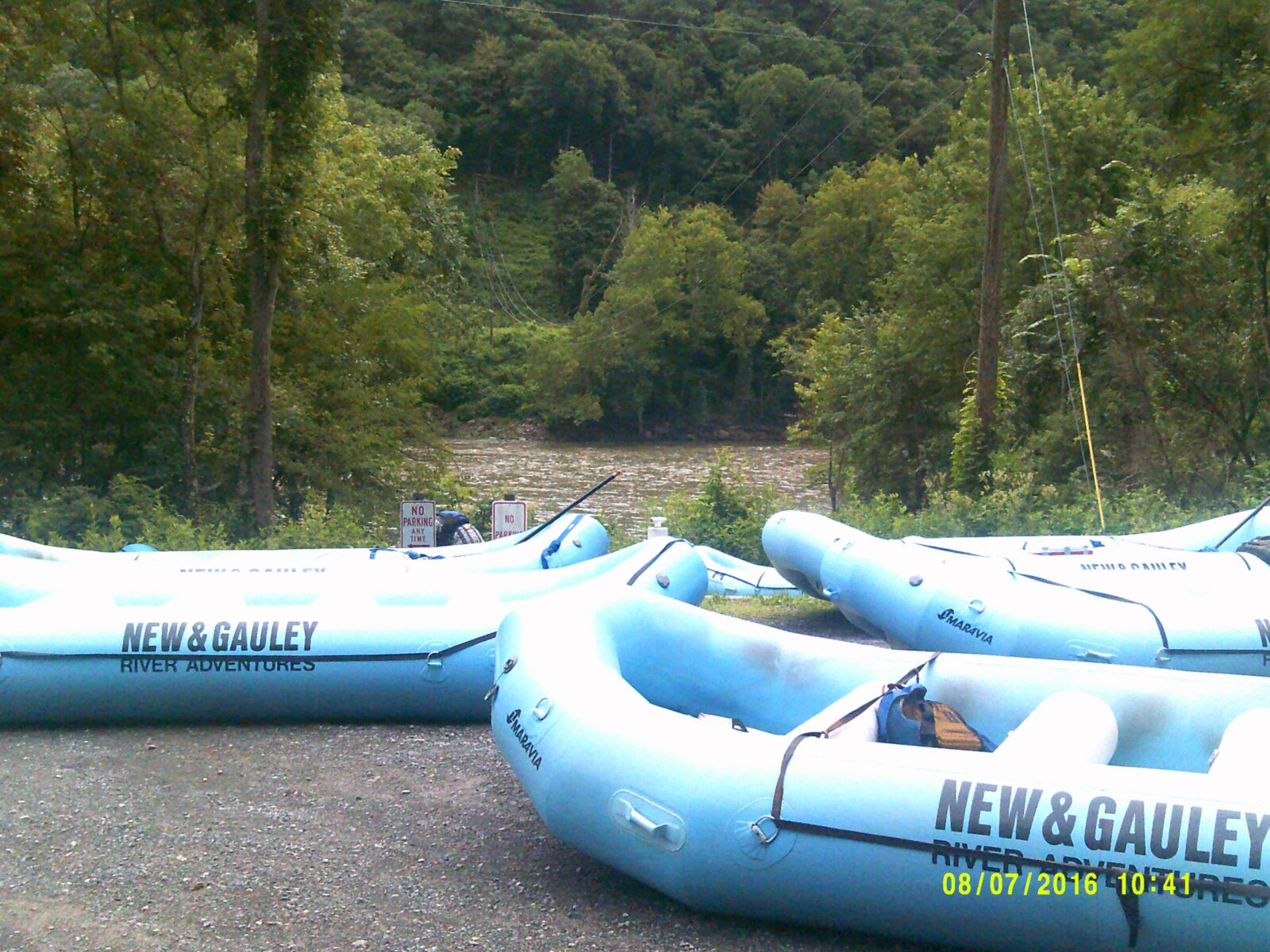 The primary purpose of heading north to West Virginia was to raft the Gauley River.  Ever since we had taken a white water rafting trip to California, we lamented that West Virginia was in our backyard and we never got there.  As the only world class whitewater on the East coast, it was a mere 260 miles away from Asheville, so time grab the brass ring.  Eric started exploring Outfitter options and discovered you can only raft the Gauley on 22 specific days during reservoir release, starting in September. The good news was that the New River was dancing spiritedly since it’s North Carolina water shed had received unusually high rainfall in July.  The class II – V rapids on a 13 mile stretch through the gorge were running fast and high.   While early August is normally a quietish time on the New River, today it was very much alive.

We found The New and River Gauley River Adventures online and compared them to other local outfitters, ultimately choosing them for their professional pictures, detailed trip descriptions, small family operation philosophy, 1 mile proximity to our campground and the Tuesday BOGO was an added bonus. We arrived at 9AM as instructed and sat around until 10 when they formed the first Conga line. The most interesting part about sitting around was that no one had their cell phones as we were told not to bring them. 40 people were actually talking to each other and if they weren’t, they were checking out their fellow paddlers, speculating on who would be paired up in a boat with whom.  It felt like 1990.  Even though we could not check social media, or VOX, or Politico, or email, we remained calm and chatted it up with the crowd.

Buddha was the lead guide and laid out the rules of the rapids before we conga’d into the paddle shack to pick up an oar, helmet and life jacket. With everyone all geared up, we boarded a vintage 70s school bus with a fresh neon green paint job for a 40 minute hot and bumpy ride to the old mining town of Thurmond for put-in. The one and a half lane road is lined with dilapidated river cabins, cargo railroad tracks and today, a very fast river.  We had wanted to visit Thurmond but thought it too far for the Como’s.  Check.

The rafts were ready and waiting at put-in. We were introduced to each guide and assigned a boat. We were 2 with a family of 6 from Cleveland. Mom, Dad and 4 football player 20 somethings. Together, the 2 women were financial types, 4 guys were engineers, one was starting dental school and one just graduated the police academy. And Buddha was our guide.

The first three hours are about getting to know each other, getting comfortable in the boat, learning the paddle strokes and listening to Buddah call out directions like easy forward, hard forward, back and get down. Buddah had been on the water for 28 years.  We learned a lot about Buddah’s life, his family, their troubles and tribulations, his ex’s, his wife’s ex’s, where the good food was in the county, and a little about rafting. The weather was a perfect mix of sunny and overcast and when the rapids swelled and we got doused with water, we were outwardly giddy from exhilaration.

Mid day is lunch on a riverbank. The guides set up the conga line make your own sandwich buffet where women eat first. Nothing gourmet, just simple lunch meat and cheese on Wonder bread.  We had not had that in a while, but it was plenty edible after you’ve just used muscles you haven’t used in years and are ready to stop and rest.

The final segment on the river is one rapid after another, mostly class III-V, meaning, big, soaking and higher probability of someone falling out of the raft or capsizing.  Buddah played up the danger zone, telling us where to swim if we fall out and if we don’t paddle exactly as he says there could be dire consequences.  The ominous tone worked a little, but then you started hoping that Buddha would fall out.  I mean, if it was so dangerous, why waste your time on this raft with four twenty something guys.  There is a raft 20 yards behind us with eight 12 year olds that you might want to chat with.  In retrospect, it was an effective way to heighten our anxiety so that when we conquered the rapid there was an elation effect of “I did that!”  No doubt it was a timeless 28 year old formula.

The rapids were great, but Eric thought that they got graded on a curve and that an east coast V was probably a California IV.  Having rafted two white water rivers now, he is quite the expert.

We’d seen the bridge from the Canyon Rim Observation Deck and from the Endless Wall Hike and from the 6 times we’d biked over it since Sunday. But to see it from the gorge in a looming rain cloud was like seeing it for the first time again. The third Thursday in October is Bridge Day in Fayetteville with a town festival that includes 100 people BASE jumping the bridge. That we’d like to see.

It was a great day on the water. We were tired and sore but at the end of the day, another activity on our wish list that we finally experienced.  We unwrapped the Como’s from their protective enclave under the stairs where we had left them and boogied on home with thunderstorms rolling in. P.S. – Eric used the Walmart $40 throwaway Polaroid waterproof digital camera with 1 star reviews to take all the pictures in this post and capture the memory!