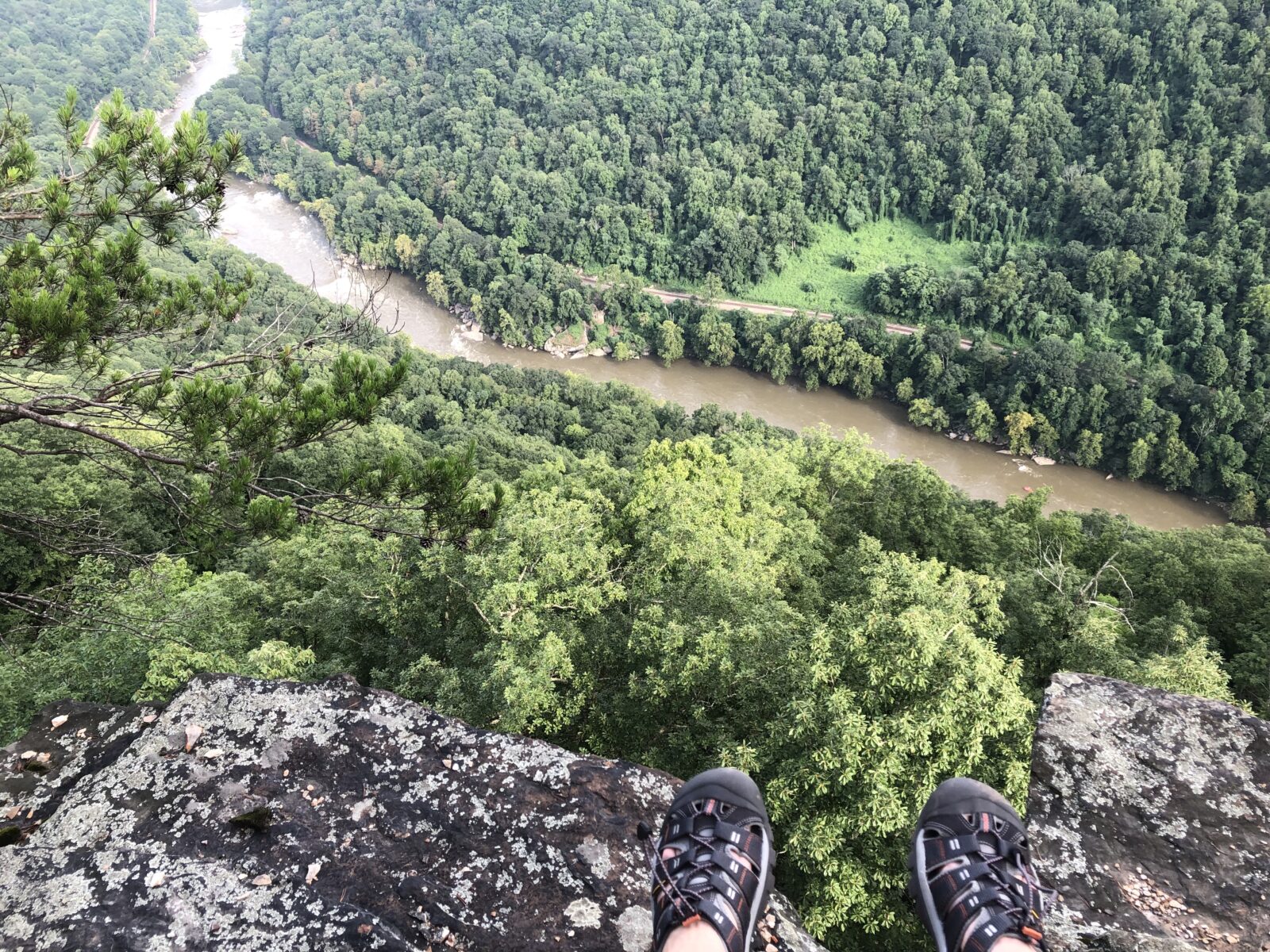 At 4:34 AM we were woken by a well-done thunderous applause from the rainman. Still going strong, the river should be flowing fast today if the weatherman’s prediction of sunshine by 7 comes true.

Today we’re doing the Tuesday in August Lower River BOGO deal with New and River Gauley River Adventures. After the Canyon Rim visit yesterday we stopped by their office, tucked back like a treehouse in the woods and less than a mile from our RV park. It’s an all-inclusive trip, bring only your adventurous spirit and nothing you don’t want to lose. They go rain or shine, unless it’s lightning and thunder, so we’ll weather up to be there at 9.

As picture junkies, we were in a dilemma about missing those Kodak moments. With Walmart 5 miles away, we jumped on the bikes, kicked it to turbo and peddled 28 mph down 65 mph highway 19 to pick up some version of a waterproof camera. While Eric was paying for a digital throwaway option, Sheri was browsing the water shoes when a 10 year old Opie-looking boy stopped her to say “Ma’am, you can sure pedal fast.” “You saw me?” She asked. He told her he and his family passed us on the road and the boy told his Dad he never seen a lady peddle so fast – she must be goin 20 mph. “I just couldn’t believe it,” he said, “that sure must be fun.” They had a nice chat about bike riding and he made her day and she, his. It’s funny, we don’t know what we look like when we are high tailing it in turbo, but we must be an unfamiliar site that makes people do a double-take. Sheri, in particular, has lost the sense of fear on a 30 mile downhill fly and picked up confidence and maneuvering skills that she is in control of the bike rather than the bike controlling her. Big change on the Reboot Roadtrip.

After Walmart, Eric mapped the route to the Endless Wall Trail, once touted as the best National Park hike in America and on every local’s must-do list. It’s a multi-elevation 3 mile loop, clearly marked and frequently travelled. We started around 5pm wanting to make Diamond Rock and back to the bikes by 7 so we were moving to allow ample time for the promise of splendor and awe. As you know, we have a new hike standard after Rock Dam. Give us a photo worthy destination for the hiking effort.

We were immediately swallowed up in a forest of rhododendron. The trail descended until it made a crossing over a stream. This terrain proved perfect for mushrooms which resurrected the Great Mushroom Hunt. The clock was ticking and the mushrooms were epic, so Eric would keep the pace while Sheri compulsively shot photo after photo, running to catch up, calling it interval training. More than a dozen new varieties since Mistletoe. Some people collect stamps and coins while others collect cars and toys. We now collect mushroom photos.

The terrain climbed away from the stream into a thick forest, with the trail using boulders and rock formations to provide natural footing for the elevation changes. A couple of miles in we reached the fork to Diamond Point. The vistas were amazing as we could see the New River cutting through the gorge from the bridge 5 miles to the south of us to 10 miles north. The Endless Wall is rock formations along the northern bank. Brave and crazy folks free climb down to the Endless Walls and traverse narrow ledges no wider than 8 inches. It makes for great photos or sad funerals.

We followed the ridge line for a mile or so catching breath-taking views along the way and left the lone yogi to get her mantras in on a splendid flat outcropping facing the setting sun. The last lookout point involved using a 6 inch diameter log to cross a 10 foot span over a deep crevasse. We passed on that one. Sure, we could have done it, but if you’ve seen one vista, you’ve seen them all.

The final half mile to the bikes was straight uphill and we were tired and sweaty so we turbo’d up and made it home to the rudimentary campground showers in less than 20 minutes of rolling hills. The campground is not going to win any prizes for bath amenities. A shed with three shower stalls, exposed pipes and a ball-cock valve to release the hot water gets you clean with no desire to linger. Thanks to Comos, our bodies and nature for an inspirational day. And now, the rain has stopped, light has broke and today brings a whole a new adventure. Reboot if you can!