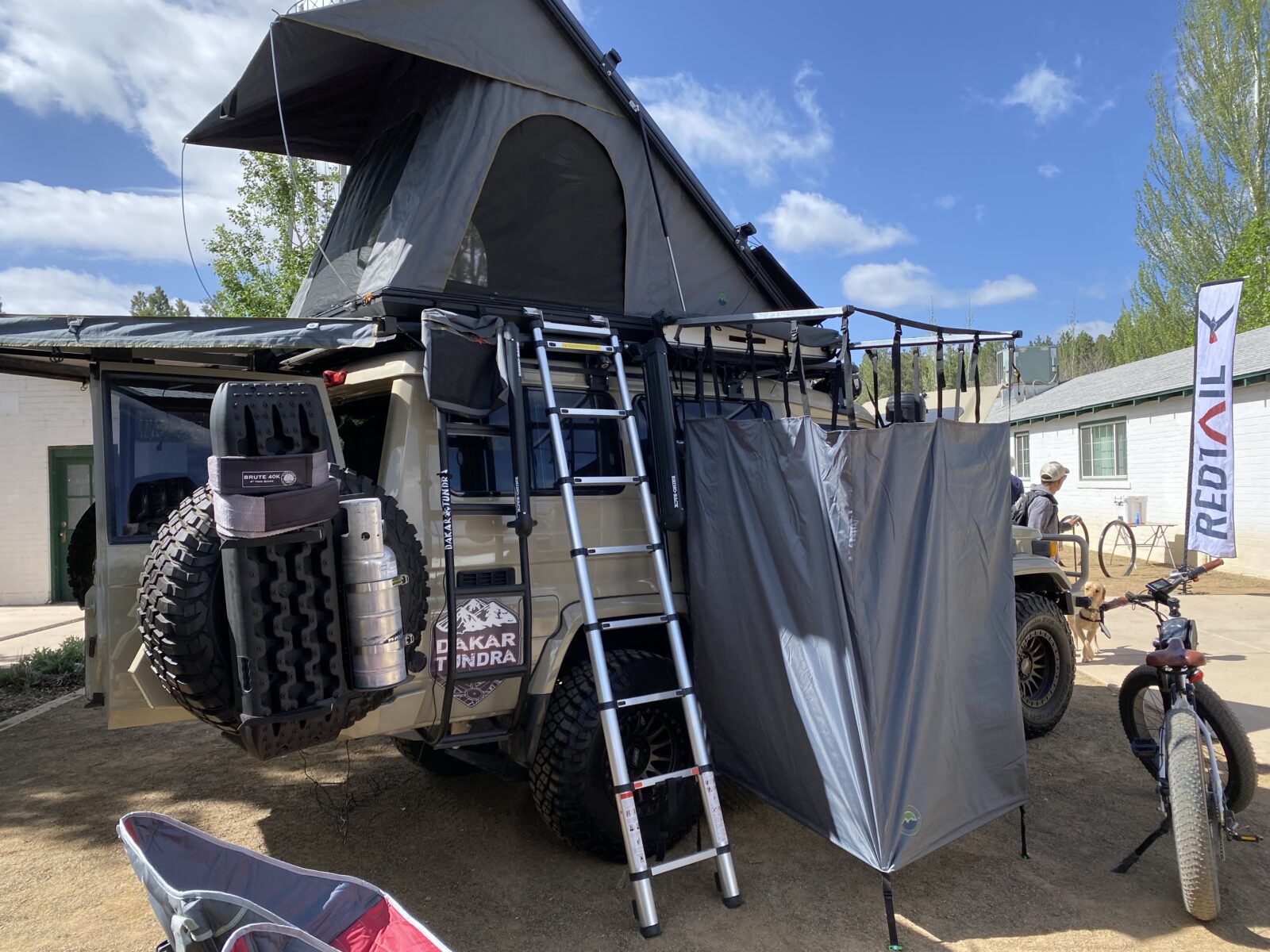 Often the most rewarding camping experiences over the years have been unplanned and unplugged. Last week Roxie bumped her way down a dirt road at El Malpais, as far as her suspension (and Eric) would allow. If only we knew what was further down that road. Time to switch things up?

The pandemic blew up RV’ing. We used to feel special, but now we’re solidly mainstream. The Overland mafia showed up just in time with ways to bring sexy back. Camping rigs at the Overland Expo are transformer cool. Vehicles are loaded with gadgets, like an outdoor kitchen that telescopes out of a secret door on the passenger side of a Rivian all-electric truck. We watched a professional chef prepare a gourmet meal at the Rivian and have the designer titanium Rivian spork to prove it. Tents pop up atop vehicle roofs and any old bus, box truck or ambulance can be retrofitted for instagram envy. The coolest ones have snorkels for river crossings and hidden compartments to store sniper rifles.

After a few years of RV’ing, we know a thing or two about life on the road, and next to nothing about being cool. They let us into the Expo anyway. Actually, they had no way to keep us out since the Air Force campground is right behind the entrance gates. We learned that just about any vehicle can be an RV if you are willing to sleep on top of it. Add a bucket for a privy, and a rickety three-legged wok contraption to cook on, and there you go – you are not just RV’ing, you are overlanding.

A lot of firms have figured this out, and surprise, surprise, are targeting the overlanding newbies with slick marketing and questionable gear. Having tried to shake the cabinet handles off of Roxie now and again on washboard backroads, we had a pretty good idea when the products were legit and when they were legitimately garbage. A hot selling trailer had enormous knobby tires, but an interior made of Chinese laminate. Our neighbor sported a stylish off-road trailer with adjustable height suspension but were taking their meals in the Expo Food Court.

A 40 foot diesel pusher with marble counter tops and a 55 inch big screen TV is the dream of the recent retiree looking to rough it in a full hook-up RV resort. At Overland Expo those same RV dollars would go towards an F550 outfitted with a massive camper package for global roaming. We actually have no idea what exactly global roaming means. Can we drive to Africa? If you did not have a mid six figure budget, the same dream was available for a zero less in the form of a tow-behind with enormous wheels and lots of canvas awnings to maximize time spent outdoors. Overlanding comes in all sizes, but one thing you can be sure of is it ain’t cheap.

Not to be too critical, the Overland crew are on to something big here. Anyway you slice it, KOA’s are not the pinnacle of the great outdoors. Most large Class A rigs fit in few National Parks, and good luck heading down that fire road into the National Forest dragging your TOAD. The best, most picturesque, closest to nature experiences often do not have electric and water connections 10 feet away. Improved suspension, improved tankage, and abundant solar collection with lithium battery storage are the wave of the RV future. We push Roxie in that direction as best we can, but 5th wheel and Overland are on opposite ends of cool.

We also got to see lots of products that were all show and no go but suppose that is true in all markets. Buyer beware! The Expo did help us to settle on a few things. First, tents on the tops of cars are mostly cool looking, practically inconvenient and fully exposed to the weather. Count us out on that one. Second, solar and electric are here in a big way. Count us in on that one. Third, smaller is better as long as smaller includes a full size queen bed, a bathroom and shower, a comfortable temperature controlled place to relax when the weather is inclement, and a ceiling that is higher than your head. How small is something like that?

We started off with full on Overland Envy before we slipped into Overland Overload. It began to appear that If you are reheating chili that came out of a bag from an ice powered cooler on a Coleman propane camp stove sitting on a campground picnic table, served in a Dixie bowl with a plastic spoon and paper towel, you are camping. But, if you are reheating the same chili that came out of a Dometic cooler powered by 12V deep cell lithium batteries, cooking it on a double burner induction cooktop that slid out of a secret compartment over the tire in your Rivian electric truck and served it in recycled bamboo bowl with titanium cutlery and an eco napkin, you are overlanding.

The truth is most people happily drive their Jeep to the store or flat tow behind their RV. Deep sand scares us and the few times we have been off road in our Superduty, we have run across other folks stuck with no recovery plan. On the other hand, an overlander will have a $135 sawtooth shovel, $300 traction boards, $400 tow strap and shackler and the $873.93 “I don’t get stuck but My Friends do!” deluxe recovery kit affixed to the rack on their lifted Toyota Land Cruiser. They are also towing their RV behind them which seems nuts.

It is a lot to get our head around. Would we actually go off-road, or just pay the high price tag of looking like we might? Somewhere in the hype and hoopla is a community of people who actually do what we often wish we could do. The thing is, they look and sound surprisingly normal. John, a slightly overweight retired corporate CFO whose wife never thought she would camp, gave us a tour of his personal rig imported from Australia, the Kimberley Camper RLT. We could not help thinking, we don’t seem so different. At Overland Expo West, anything seems possible so they must be doing something right. So if you know of someone looking for a well cared for fifth wheel, give us a call.