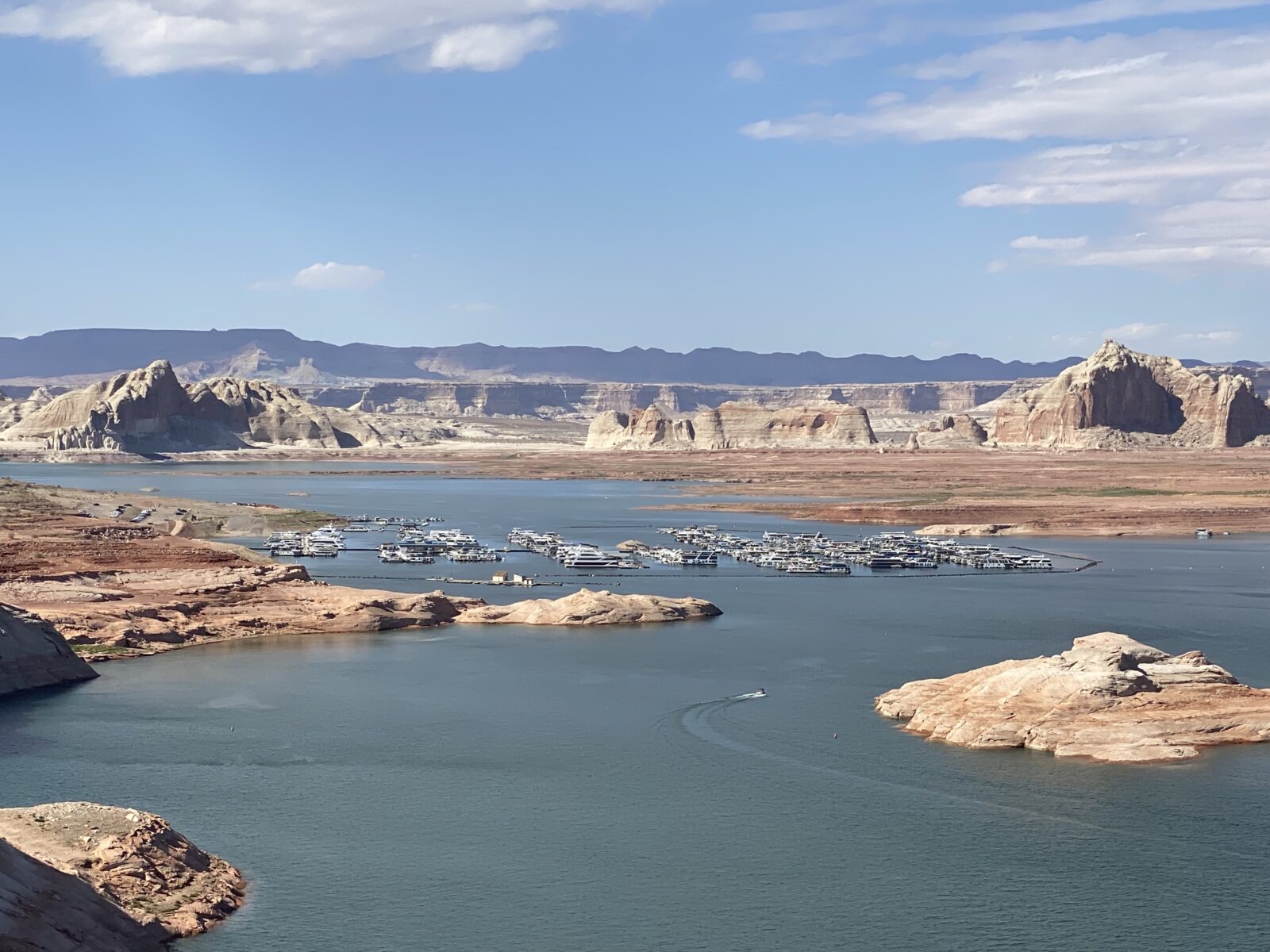 Last month we were in a go fast, 12 miles off Corpus Christi, catching the limit. This month we’re paddling an extra long double kayak and jumping off a cliff that had been submerged for decades.

About 150 miles north of Flagstaff is Page, Arizona, home to the Glen Canyon National Recreation Area and the famous landmarks of Lake Powell, Antelope Canyon and Horseshoe Bend. The scenery changes dramatically, dropping out of the whispering pines into Navajo Nation and the roaring painted canyons.

There’s an art experiment called the Painted Desert Project that sits on an abandoned building site in a deserted section of HWY 89A. It’s a concept initiative where famous street artists are invited to live on the reservation, immerse themselves in the culture and community and create large scale installations that would stimulate conversation between residents and tourists passing through. Flying by, we both did a “What The Heck Was That?” and Eric turned the big rig around for an on-the-ground tour. As lovers of public art, this project accomplished its mission to get us talking. There’s nothing else on the this lonesome highway, save a few Trading Posts offering Navajo art and jewelry.

Pulling into Glen Canyon, we’re in the Ritz Carlton version of National Park camping at Lake Powell Resorts and Marinas for three nights before going off grid. To put the geography in context, Lake Meade is the enormous body of water that sits behind the Hoover Dam in Nevada. The water from Lake Meade serves millions of people in LA and Vegas, and even more millions of almond trees. As an insurance policy, the government put another dam 200 miles upstream on the Colorado River, then flooded it to form Glen Canyon. In doing so, this may have ruined the greatest National Park that never was. Pick your reason – global warming, 1000 year drought, bad luck – Glen Canyon is running out of water and Lake Meade is not doing much better. But Glen Canyon is nature’s revenge, reappearing after six decades to highlight what was drowned.

If you (like us) thought a disappearing lake would be tragic, you’d be correct only if you owned one of the Bezos-sized houseboats at the marina. It is actually stunningly beautiful as slot canyons and sandstone structures reappear out of nowhere as the water level falls. Heading out in the morning, we were the first to launch into the serene glass water, surrounded on all sides by sandstone cliffs and mysterious formations. We kayaked a few miles past the marina and into the reservoir to jump off the sandstone cliffs of Antelope Island. Returning five hours later, one obnoxious speed boat after another sped by filling the lake with annoying chop, rap music, and drunken revelry. We not so secretly hoped that the water level would fall a bit more and beach the power boats.

Many boats were racing to the over-hyped Antelope Canyon made famous in countless photos of narrow undulating sandstone. While we would have loved to see Antelope Canyon’s natural beauty, we just could not stomach the conga lines of visitors packed in to a 20 minute walk through the canyon. Being on Navajo land, you can only go by Navajo tour so there’s not going on your own terms. With 96 slot canyons in and around Glen Canyon, we vowed to find one that had not bussed the crowd in from Caesar’s Palace to visit. It is a tough call because Antelope Canyon is THE #1 destination at Glen Canyon, but never underestimate mankind’s ability to ruin a beautiful thing.

Since we had forgotten to train for 5 hours of kayaking over the past year, we were relieved to make it back to the put-in. We had wrung all the information from our local guide that he had accumulated over his 40 years in the area. Mission accomplished at getting smarter on the area even though Sheri did not get to maneuver up a slot canyon – yet!

We admit that it’s not mentally healthy to be always bah-humbug on crowds. You have to pick your battles. Crowds can be a good sign. Sometimes empty restaurants are empty for good reason. The #2 attraction, Horseshoe Bend, was also reportedly a mob scene but this we decided to attend because you only have to pay for parking and not a tour. Purely from a “give me a backdrop that Ansel Adams can do something with attraction,” Horseshoe Bend on the Colorado River is in the top 3. This is one attraction, however, that the crowd just makes better. If you are of a certain age, you do not totally get the Instagrammable shot phenomena. But, it sure is entertaining watching the Instagrammers go for it. Top attitude and swagger were on full display at every view point. It was such great people watching that we almost forgot to look at the river!