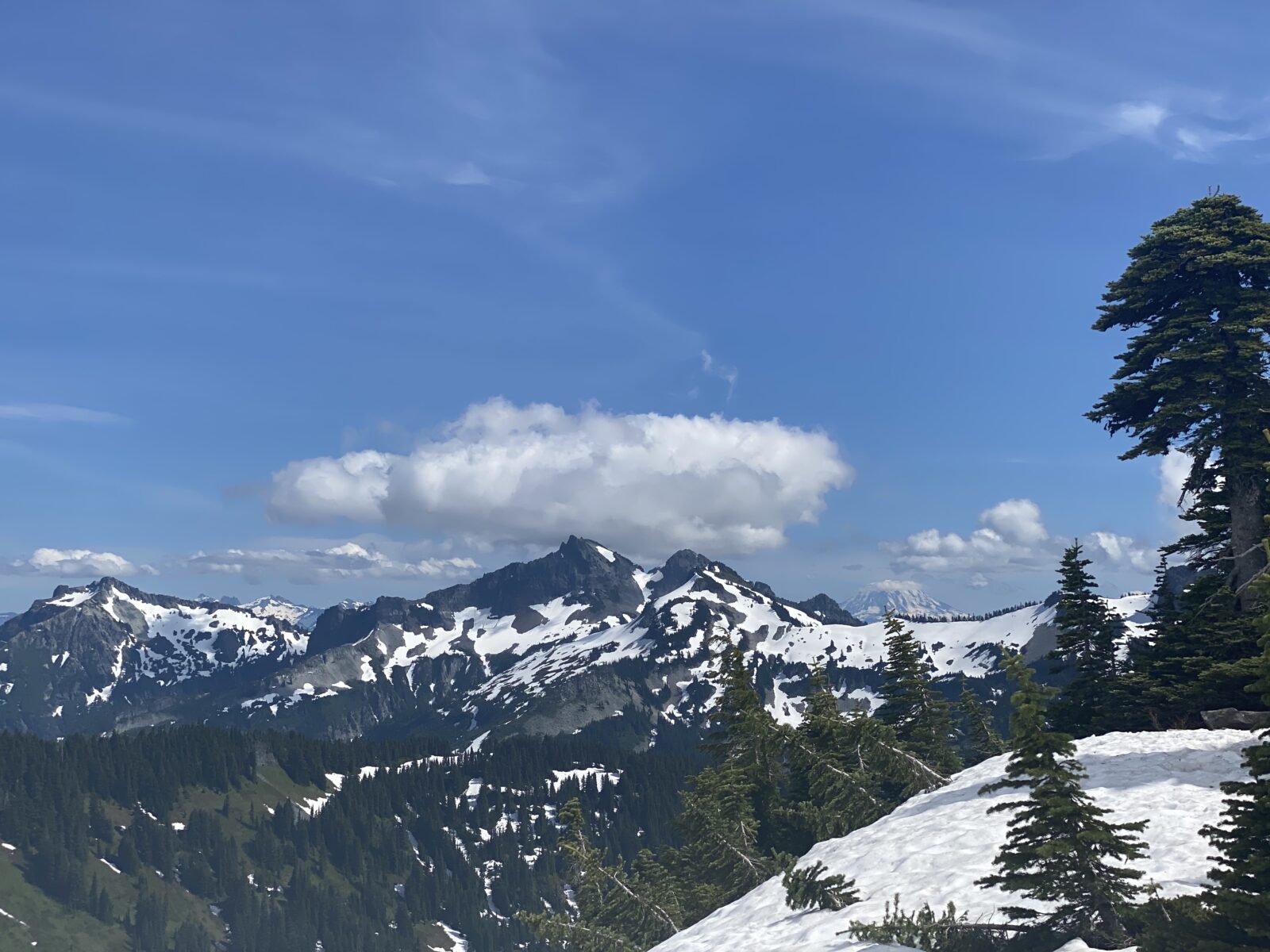 Mt Rainier could blow its top any day now or it could wait a little while, which in geologic terms could be like 10,000 years. At 14,410 feet, Rainier is the tallest volcano in the Cascades and the most glaciated peak in the lower 48. We took our chances on America’s largest active volcano, flirtin with disaster, nothing to protect us but an REI tent and some fleece outerwear.

Mt Rainier is so big it is its own National Park with five distinct districts – Longmire, Paradise, Ohanapecosh, Sunrise and Carbon River – along with a 93 mile, 22,000 elevation gain Wonderland Trail around it. It’s like the government put a big box around the enormous peak to preserve its pristine state for future generations, or until it decides to blow its top like Mount St. Helens and throw a wrench in the whole plan.

Using the basecamp model, we left Roxie behind on Joint Base Lewis-McChord at Holiday Park. Complete with 50 amp full hook-up, laundry, commissary, exchange and all the other amenities we have come to appreciate at our military campgrounds, McChord is a great place to leave the rolling condo for overnighters.

With Boss stuffed for a couple of days of tenting, we arrived at Cougar Rock campground in the Paradise district only to find it fully booked. Of course we had seen that before. Reservation fakers grab all the spots online – sometimes they show up and actually camp. After 20 minutes chatting up the park rangers, they coughed up a no-show spot on the D loop. When fully operational, Cougar Rock has 173 sites but right now only about a third are available for use. The remainder are closed for “hazard trees,” an ambiguous designation to say the least. According to the ranger, those sites have dead or damaged trees ‘nearby’ that could pose a camping hazard. In a forest full of trees in all states of growth from sapling to rotting on the ground, thank you for saving us from the hazard trees.

Not wanting to start the great hazard tree debate, we pitched camp and headed to Paradise, as in the Paradise Visitor Center which is also the trailhead to various hikes including Panorama Point. With a name like Panorama Point, you have to hike it. We discovered there are four seasons at Mt. Ranier. Winter goes from September through July, Spring is August, fall is also August and Summer is a state of mind.

Being mid-July and still technically winter, we hiked 100 yards out from the visitor center to find snow pack for as far as the eye could see, thus covering all trail signs. Fortunately, the inspired name of Panorama Point had lured other hikers to the park and they had ventured off into the snow field to find the destination leaving their boot prints behind.

We put our boots in their boot marks and bet that they knew where they were going. Every once in a while, we would pass folks coming back from the Point who assured us that we were going in the right direction. Who needs signs?

The alpine landscape had all the features required to inspire awe: distant giant waterfall, looming 14,400 feet peak in the clouds, ice-blue glaciers spilling off of the slopes, wildflower buds peaking thru packed snow. Eric scurried up the snow wall across rock wall over the ice patch to see Mt Adams, Mt Hood and Mt St. Helen from peak to peak while Sheri compared the slippery slope hazard to the tree hazard and decided that if those campsites were dangerous, this was off the charts and stayed behind.

Returning from the Point, a makeshift snow flume provided a short-cut for those that did not mind hiking off the mountain in soaking wet icy clothes. Eric thought about the heat wave in the southern and eastern U.S. and proceeded to take an ice bath in tribute to all of those who are suffering. Sheri video’d him (see our instagram site) and countless other sliders, filling her time waiting for Scurry to return, airdropping memories to complete strangers.

Dismounting in wet pants made for a long 2 mile snow shuffle back to Boss but we had Hearty Lentil Minestrone Soup (from Cookie+Kate cookbook) waiting for us back at camp. Lucky for Eric, Sheri packed a pair of her lounge pants so his jeans could dry by the fire while roasting marshmallows for s’mores.

For the first time (ever?)we stayed in camp until checkout at noon – built another fire, oatmeal on the stove, read books from the little library in Arlington next to the community garden. Those book nooks are the gifts that keep on giving as we’ve taken to making deposits and withdraws whenever we happen upon them. Sheri’s never been an avid reader, but cutting cable (also tv reception and electricity) has made her a book of the day club member. This gal has read more books this year than in the last 5 combined.

With ample energy that comes from the kind of rest you can only get from a night’s sleep wrapped in a mummy bag in mid-forties temps, we had time for an afternoon hike to Comet Falls before the day’s end. The crowds were light; the trail was steep. We climbed into the canyon roughly following the river that descended from a massive glacier above. Comet was the final destination with two bonus falls along the way making three falls for the hike of one.

Starting in a forest of towering pines, the trail broke out and crossed a sunny sloped alpine meadow in early spring bloom.

A pattern has emerged in these Washington parks … if you’re not on a boardwalk or pulled over on the side of the road at an overlook, you’re likely doing a very vertical hike that is many miles round trip. Eric grapples with people people passing us while Sheri plods along hoping it doesn’t turn into a medical emergency. Those of us have been adults for awhile can relate to the feeling that we’re all 25 in our mind. Put yourself on one of these hikes and it becomes painfully obvious that you’re not. It’s humbling to feel your own mortality. You’re grateful to be on the hike, more grateful if you summit but you’re still annoyed that you were passed a dozen times and it took an hour longer than the posted route time.

The canyon dead ended at the spectacular falls with the glacier melt spilling 380 feet down in front of us. We waited for a couple to finish their selfie before taking our turn. We held on to our feeling of gratitude for being there whether we photographed it or not. But of course we photographed it. Another photo of Comet Falls in another icloud library.

At some point, we hit retina overload and worked our way back to the trailhead. As tough as the climb was, the descent was tougher. How many Comet Falls or Panorama Points or Mt Browns or Mt Bakers will it take for knees and hips and calves and backs to become accustomed to this?

Mt Rainier proved a good partner for the basecamp/tent exploration model. Nowhere along the way did we see campsites large enough to accept Roxie. Even if there were, it was infinitely more enjoyable snaking our way up to the Paradise Visitor center without her. Plus, that sleep-on-latex queen bed never felt so good when we got back.