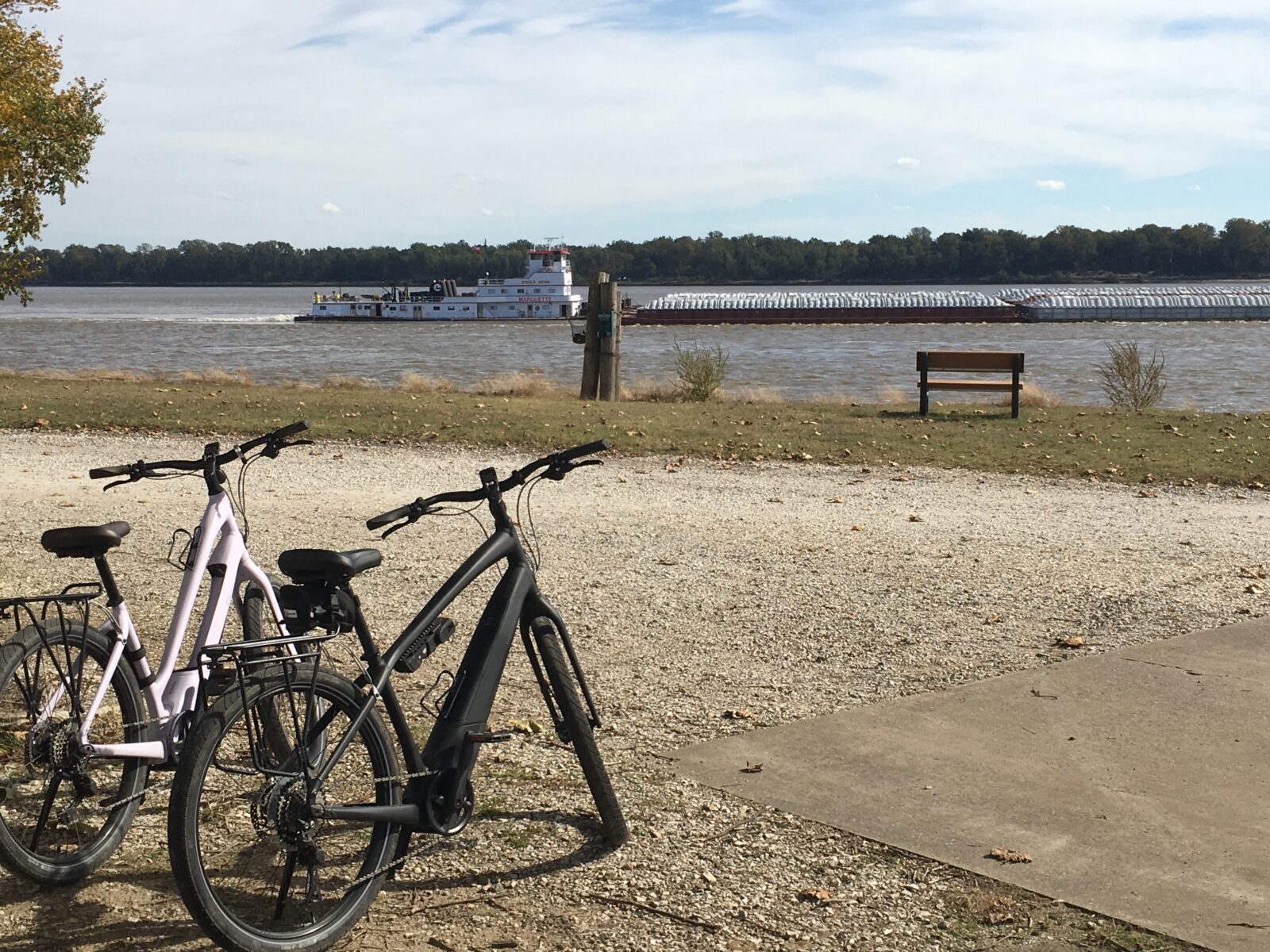 VOTE says the billboard just outside Nashville en route to a 42 hour stay in Memphis. We mailed our absentee ballots on the day we started trekking west. Now 936 miles from home, we are camping on the banks of the mighty Mississippi River at Tom Sawyer RV park in West Memphis, AR, where we can watch tugs push and pull barges all day long.

Leaving the cedar forest east of Knoxville, we joined I-40 which crosses the entire state of Tennessee.  For your directional information, three interstates join the east and west coasts.  I-10 runs along the southern border, good for folks who want to avoid elevation changes and cold weather as much as possible.  I-80 runs across the north so if you need to stop in Chicago for anything, that’s your road.  I-40 is kind of like the belt in the middle of the country.  Apparently, it is the favored long haul trucker route.

Since we and Betty do not quite travel at the legal speed limit of 70 mph whereas most powerful diesel trucks do, hundreds of trucks whoosh by us. Their size and speed naturally push us away, so Eric has to work to hold the line while Sheri holds her breath hoping we don’t collide. It’s possible we could travel faster.  But, having spent a couple of thousand miles with Betty, 60 mph feels about right.  At 60 mph, the transmission can stay in its highest gear along shallow grades with the RPM around 2500.  We can chat or listen to the radio with the sound of the Ford V10 motor not a terrible imposition.  Faster than that, and the transmission has a propensity to downshift abruptly on slight grades with the RPM jumping to 3500.  The engine roars drowning out conversation.  The behavior is typical for a gas-powered motorhome which is why some prefer the more complex and expensive diesel pusher motorhomes.  Not us.  We like to hear what the motor is up to and relive the days of the double nickel speed limit.  It’s fun AND nostalgic.

Memphis anchors the western most point of Tennessee and sits on the banks of the mighty Mississippi river.  Directly across the river is West Memphis, Arkansas, connected by the Hernando De Soto bridge and our destination.  The campground is also right on the banks of the river, but on the Arkansas side and about five mile south of downtown Memphis.  Connecting Tom Sawyer campground to Memphis is a fabulous multi-use trail called The Big River Trail.  This is important, because there is basically nothing in West Memphis. When we rode for five miles to find a terrible grocery store, a young man came out to ask questions about the Como bikes.  When told we had just come from Memphis, he was awestruck.  “I heard it is great over there.”

As soon as we arrived at Tom Sawyer, we took off on bikes as it was sunny and 80 with rain predicted for Wednesday. The campground is surrounded by industrial Memphis with factories, trucking, rail and highways but feels like a private enclave of riverfront living.

It’s 10 miles from home to downtown. We don’t know what’s going on here, but it’s supercool to be riding the crest of a gravel levee with factories on one side and horses on the other.

The trail winds around and under highways

Culminating in fabulous fashion at the enormous road/rail/trail bridge structure.  It is called the Big River Crossing and it is exclusive to joggers, bikers, walkers, and scooter-ers.

A mile long, we had an incredible view of Memphis and the big river mid-span.

Once in Memphis we took the bike tour of the sites including a run down Beall Street which is three blocks of music and drinking spots.  No longer tempted by the fire water, we pedaled directly up Main street in the heart of town.  It is possible that Tuesday afternoon is an especially slow day.  It is possible that we had arrived a few days after a zombie apocalypse.  In any case, if we saw three dozen people along the ride, that would surprise us.  Memphis felt like Disney land, one hour before the gates opened.  There were lots of business, restarants, a cool old fashioned trolley, a sports stadium, but very few humans.

When we stopped at the tourist center for a bike map on our way into town, the guide insisted there were three must-sees: Graceland, the Peabody Ducks and The Great Pyramid.

Straight out of Las Vegas, a 28 story pyramid houses the largest and most interesting Bass Pro Shop ever.  Now, your everyday, run of the mill, Bass Pro Shop is a cool store.  The Pyramid Bass Pro Shop is on a whole new level.  Inside the pyramid is a cypress forest-catfish lake-cypress lodge-Bass Pro Shop world.  Giant trees stretch upwards and disappear into the air while boats float on the lake ready to launch for fish that are everywhere.  We took the elevator, which is the largest free-standing elevator in the world (whatever that is) to the top of the pyramid where an observation deck and restarant reside.

It was the perfect vantage point to see the entire cityscape below us.

The views were so incredible that we decided to hang out until sunset, eating at the bar and taking in Memphis from this high perch.  It didn’t hurt that the cost of the elevator ride is credited to your meal!

After watching the sunset, we returned to our bikes as darkness settled on the city.  We had come prepared for night riding – something that we love to do.  The air was chilly but not cold, so we bundled up and flipped all the lights on.  We headed south through the Beale Street Landing, a community park built on the banks of the river with river boats, playgrounds, sports courts and of course walking and biking paths. Eventually we joined the Big River crossing for some memorable views of Memphis at night and the LED light show on the big I-40 bridge.

Using all the lumens we could generate, we cut through the pitch darkness, back along the top of the levee, into Tom Sawyer’s retreat to close out a 30 mile ride and prepare for a morning return to visit The National Civil Rights Museum.