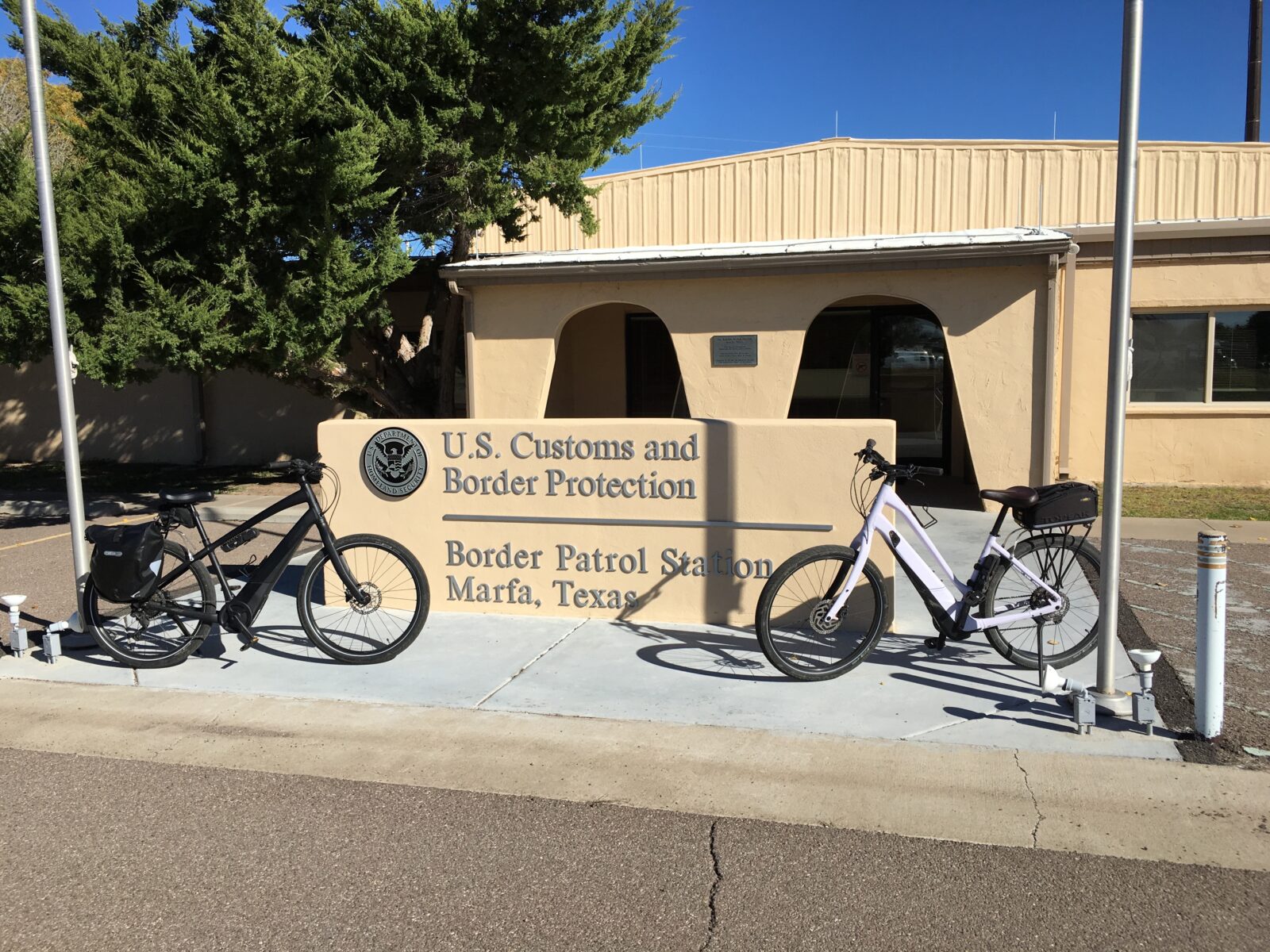 Fall back had us up at 4:30 in the morning and instead of rolling over, we got up and went, although we were a little surprised to get to the park’s exit and find it padlocked shut. We had a gate code, which we assumed would be a key pad for an electronic open, but it turned out to be the four digit dial combination. Chubby fingers, black night, tiny frozen dials – this was Texas version of Escape Room.

Yesterday was Big Bend country. This diverse and remote corner has more than a million acres, two national parks, mountains, hot springs, desert, the US/Mexico border and hundreds of miles of oil industry activity. We drove West on I-20 for 170 miles through Midland, Odessa and Pecos where the scenery was as rough as the red dirt-covered, dented, hard working Super Duty pickups passing us on the 80 mph two lane superhighway. We had a good 4 hours to try to figure out why anyone would choose this life, this area, this career. Maybe the money is good out on the Permian tapping into the next big source of energy. With no conclusions, we think it might just be a West Texas way of life.

At Pecos we turned south on 17 toward our final destination of Marfa, a reputed artist enclave settled by minimalist artist Donald Judd, and darling of pretentious media over the past 5 years. Curious, we added it to the itinerary even though it was 100 miles off our main route. As oil fields turned to farming, cattle and scrub, we headed deep into the middle of nowhere with two added pop-up excursions on the GPS.

We love to stop at the visitor center when we enter a new state to pick up maps and chat up the attendants about where we’re going and what there is to see. At the border of AK and TX, welcoming Debbie had never been to Marfa, or West Texas, but she did have a Big Bend Travel guide and some brochures on Balmorhea State Park and the McDonald Observatory, both highly rated, along-the-way must-sees. Known for the crystalline water from San Solomon Springs and an Oasis in West Texas, we pulled in for the chance to dip our toes in the springs and found a structurally damaged swimming pool, closed to the public and wrapped in a chain link fence. The ranger said we could picnic if we wanted, for $7 each. No thanks.

To the north of Marfa are the Davis Mountains, to the southeast the Chisos Mountains, and to the southwest the Chinati Mountains, which laid clearly in our sights. During this leg, Betty would climb from 2,000 feet to 6,700 feet, the highest elevation in her 16 years of exploring.

It was the first time in 700 miles we saw a changing of the seasonal guard and the contrast of yellow trees on blue sky and russet rock formations made us swoon as we snaked higher and higher through the mountainous pass.

Perched high in the Davis mountains of west Texas sits the McDonald Observatory.  They offer guided tours on Sunday mornings, and star parties in the evenings.  We opted for the Sunday morning tour which necessitated the early departure from Lake Colorado City.  Observatories need a dark sky to do their job which means that they need to be at least 50 miles from any major sources of light normally associate with humanity.  The mountains of west Texas are perfect for that.

The climb to the observatory was spectacular.  Stunning rock formation decorated the rising hills.  As we climbed through 5000 feet, the view to the horizons was enormous.  As if on cue, two wild boars came out of the dry grass and made their way across the two-lane road.  30 miles of winding climb in second gear later, we parked at the University of Texas installation; home to the fifth largest telescope on earth.

Astrophysicists are a funny lot.  They think in terms of billions of light years and while their work is purely scientific, the nature of it cannot help but to spill into the meta-physical.  The McDonald Observatory is the perfect place to contemplate your existence as you peer back to the beginning of time.  The expansive surroundings, remoteness, and natural beauty reinforce that feeling of being a tiny spec in some larger creation.

In contrast to the rugged surroundings, huge pieces of engineering sit atop the peaks.  Each of the three domes contains a telescope.  Concrete foundations anchor the 100+ ton structure to the mountain in order to provide the most stable platform possible to look at a quasar some 12 billion light years away.  We joined a robust group of about 40 folks on a tour of this unusual installation.

About 70 people live at the top of this mountain.  There is no cell phone service.  Most of the people are electricians, and pipe fitters, and heavy equipment operators, and electrical engineers, and the like needed to keep the instruments working perfectly in this unforgiving place.  A few are astrophysicists, although most of the actual astronomers work confortable back at their university desks on the electronic data sent to them from the observatory.  From time to time they publish their findings on the number of planets orbiting other stars, the dark energy pushing the universe apart, and cosmic background radiation.

We were able to climb the five floors up to the giant 106-inch telescope that was built in the late 60’s.  The ‘106’ refers to the size of the mirror that collects the light from out space.  The actual machine if much bigger.  A peculiar man who was celebrating his 19th anniversary on the mountain gave us the tour.  He pointed out the cabin where he lived.  We wondered if he had family up here.  What life was like in this unusually remote ‘town’ where a drive the store is a 100-mile, four-hour excursion.

After getting to touch and operate yesterday’s technology, we bused on over to the star attraction, the 10 meter, Hobby-Eberly telescope.  Instead of one big mirror, the HET uses a computer to control 91 smaller, 1-meters.  At this point, 120 minutes in to the technical details being delivered in a flat tone by the original star man, one of us may have been on their fourth game of spider solitaire on their iphone, so don’t ask her about the details of how the HET works. Mercifully, the class, I mean tour, ended on time and without a quiz although I am sure, had their been one, we would have done fine if it was a team effort.

We read the NYT articles about Marfa, the old 60 Minutes and NPR gushings, the recent blogs about hype vs hell-yeah treks to a the city on a great highland plain in the Chihuahuan Desert. Marfa was the setting for the 1956 James Dean film, Giant, the 70s settling of an artist wanting to escape the NY/LA artist scene and the Burning Man-type following of tourists who wanted an authentic, middle of nowhere experience in the 2000s.

There are 4 or 5 RV parks in Marfa, a few South Beach style, $270 a night hotels and the bohemian El Cosmico where Mañana is it’s manifesto and a teepee runs $150 a night. We booked into the $28/night Tumble In, a 14-site full hook-up campground 1/4 mile east of the Marfa City Limits and the perfect location for a Como excursion.

Our first stop was the Chinati Foundation to see the patriarchal museum of Donald Judd, who bought the 340 acre Fort D.A. Russell Army base in the 1970s and turned it into a destination of art and architecture on rugged land and open sky. Most everything is closed in Marfa on Sunday, but we did see the permanent collection of 15 outdoor works in concrete and the John Chamberlin collection of 22 sculptures of crushed metal in a renovated wool and mohair warehouse downtown. We weren’t allowed to take pictures there, and a small Asian girl wearing a Police ball cap closely followed us around. We think she may have been part of the exhibit experience, but we can’t say for sure.

Pedaling through downtown, we stopped in everything that was open – the Hotel Paisano and it’s tribute to Dean and Giant and a store selling rocks 3 for $25 and cowboy hats for $700. All the municipal buildings were closed and the streets were empty save a few tourists drinking jalapeno-salted margaritas at the Judd Grill.

The Chinati is surrounded by 2 square miles of barren land with wind-battered bungalows housing a population of 4,000, 75% of whom are Hispanic living in the second poorest county in all of Texas. We talked to a local on an electric bike outside the Get Go, Marfa’s Gucci grocer, about his take on the town. He relocated over a decade ago from Houston with his landscape painter wife, she joining the professional artist community and he retired, dabbling in construction projects and other Marfa-building activities. He was bearish on growth, noting outsiders think Marfa is on the verge and are spending bubble money on real estate – a 2/2 run-down bungalow is listed for $500k in town. A shell near the Chinati is $350k. Most of the residents can’t afford to live there, only 800 are eligible to vote and the artists aren’t participating in the tourism.

Marfa is also the Regional HQ of the US Border Patrol. Our new friend says 12,000 military are coming with more people protecting the border than people coming over the border. Local consensus is overkill, he thinks.

We feel late to the party, as hep is now commercial; an experiment, a formula. Authenticity is a fleeting proposition. When you have it, others want it and when the secret gets out, it can slide into a packaged cliche. Maybe Marfa isn’t quite there yet, but it is well on its way. If you have big city money to drop on a renovated bungalow, and long for the lonesome whistle of the freight train cutting through the night to inspire your creative spirit, Marfa may be right for you. You will find some like minded people, and a steady flow of tourists with tourist dollars, on brief looksie excursions into the windy west Texas landscape. If you are a tourist, you will find rustic lodging and dining at familiar LA prices away from the mega-cities and theme parks. If you are a starving artist looking to live and work on the fringe, keep moving on.