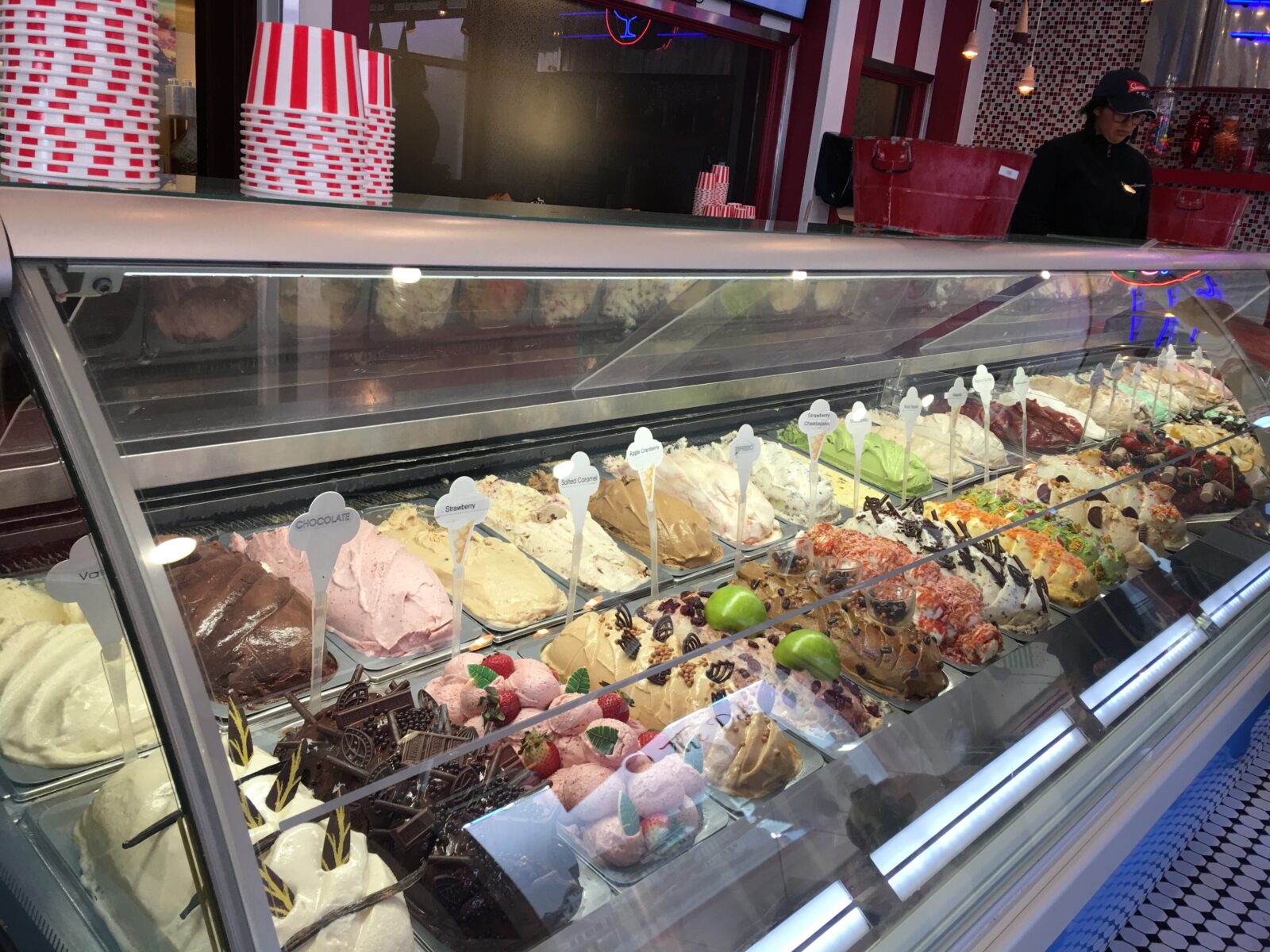 Yesterday was moving day. From waterfront to back row. Bummed to be losing the coveted, unobstructed view, we moved from site 127 to #2 and got closer to the bathhouse behind an empty handicapped site and facing the beach access path. Waterfront was a back-in so we had al fresco views. Back row is an indoor/outdoor silver lining! There really are no bad sites at the Cove. We will happily take whatever we can get.

Rain has invaded the greater San Diego area so Eric is constantly monitoring radar and weather patterns to venture out during windows of sun. Yesterday the window was open from 10 – 4 so we biked downtown to check out the iconic Hotel Del Coronado.

Striking from the road, HDC oozes beach chic up close. Locking up the bikes and heading down the promenade, we stopped at the crowded beachfront, surf-inspired Taco Shack where you could get a fish taco and martini for $30 while hanging with the sun kissed crowd. We snagged a seat on the concrete wall right next to that and ate our ziploc bag o kale salad with premium spring water. People watching is a primo pastime. After lunch we strolled through the restaurants and shops. The $14 gelato at Sundae’s looked AH-MA- ZING, as did the artisan pizza at Eno’s and Sunday brunch in the Crown Room. Rooms start at $400 in February, and go up from there depending on the view – about a 10x multiple on the rolling condo at the Cove.

We window shopped the boutiques. Eric considered this ensemble for daughter Katie’s wedding. Did she say the theme was peacock chic?

While it might sound like we are obsessed with how much things cost, it’s kinda true – we are. Not being earners anymore, we think harder about each dollar we spend because there’s not enough guaranteed replacement money behind it. How much joy will a $14 scoop of ice cream bring? Is $48 for a Hotel Del Coronado ballcap too much? As we were shopping through The Emporium, we found the 65% off shelf and decided that it would be fun to take home a piece of the Del. Two plates, two bowls, two mugs and a platter for less than the cost of a ballcap. Our Hotel Del Coronado dinnerware will be a colorful memento of our time on Coronado Island.

Shopped out, we headed down the the beach for a paddleball Work out. We love the reactive nature of the volley, combined with the sprint and recover ball chase when we miss. Sand is like clay, soft and forgiving on the knees, but with ball bounce for when you just can’t quite hit the fly. While we played, our yogi friends practiced their poses in the water.

Coming up on 2:30 with rain scheduled at 4, Sheri got a mani-pedi from Lynn at the Coronado Beauty Lounge while Eric made a True Value and Vons run. With the panniers packed and the weather threatening, we cranked up the Comos and sprinted back to Betty in 20 mph headwinds, picking up the Super Bore in the 1st quarter and pulling the fish off the grill as the rain hit. The sol is on our side.