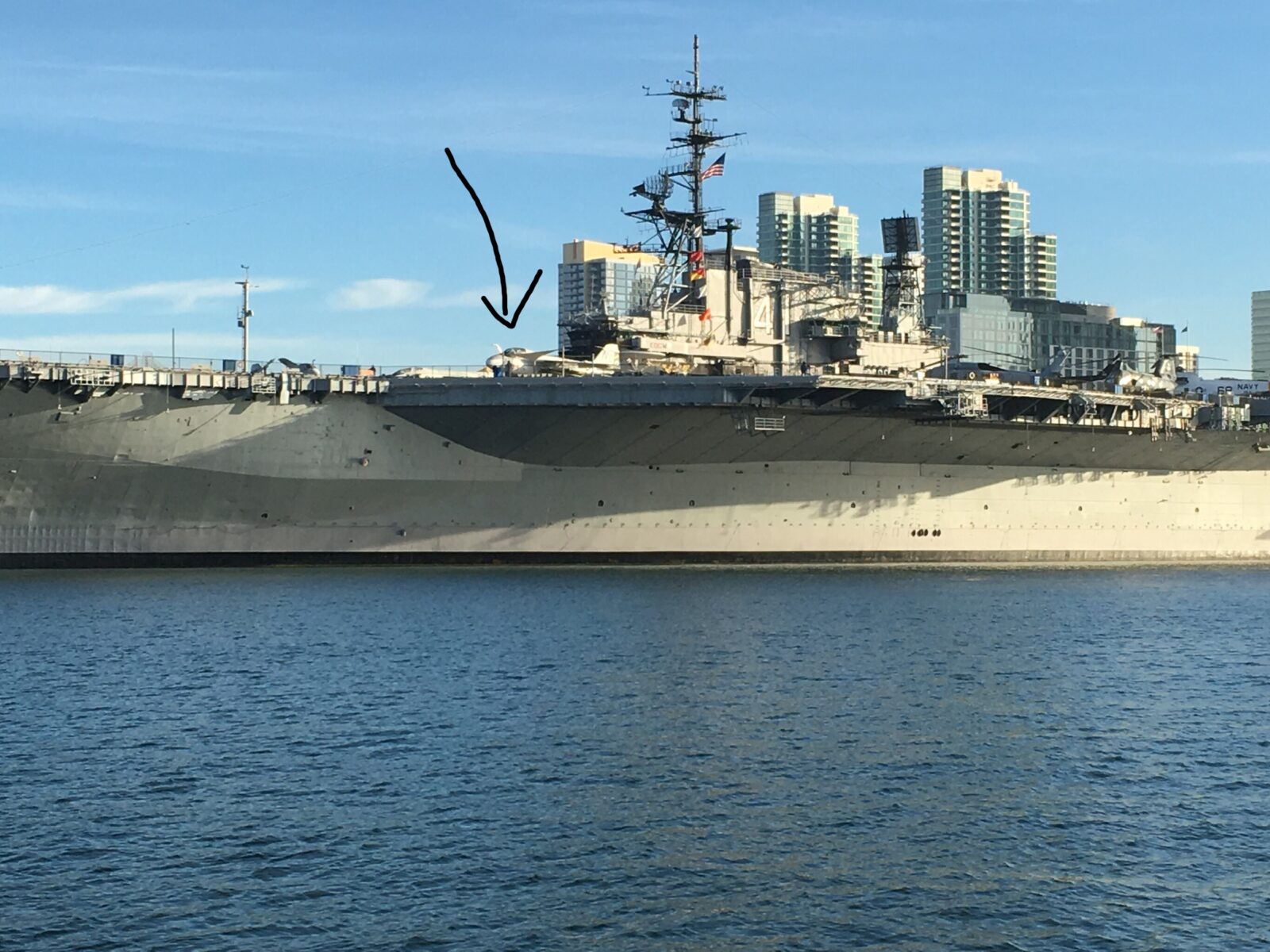 On the first day of February in Two Thousand Nineteen, it was a brisk 50 degrees with a week of rain coming later in the week. !Carpe Diem! we said and shot out of bed like we were commuters again. Coffee, Grooming, Breakfast, Dressing, Lunchpacking, Transport. Old habits …

The San Diego-Coronado Ferry runs every 30 minutes to and from each others’ shores. The first three runs are the commuter runs and offer free passage and a coupon to return. After that, it’s $5 each way. We would be commuters. (Cheap or savvy shoppers?)

The 15 minute ride took us past Naval Base San Diego, or the Ship Base, as compared to the Plane Base on North Island that we biked to earlier in the week along with stellar views of the city and the USS Midway with a very familiar plane at the head of the flight deck. Oh what a day this will be!

We arrived Broadway at 8 and Midway didn’t open until 10 so we had two hours to get coffee and go see some big ships. What better place to java than The Donut Bar? Splitting a large Mud Pie and small Creme Brûlée, the caffeine/sugar high kicked in immediately and we were off to the shipyard. And in case you’re wondering, the hype is truth – best donut in the world. An old-fashioned, unglazed fluffy white cake donut with sinful topping. Worth the trip and the wait.

Leaving downtown, we entered industry city, crossing I-5 and the train yard and past the Port of San Diego and dozens of Dole trucks to get to the base.

Unfortunately we aren’t permitted to take pictures there, which is a shame because you would be awed by the greatest fleet in the world. Destroyers, Aircraft Carriers, Supply Ships, Littoral Combat Ships, even the Humanitarian Hospital Ship named Mercy. Here’s a sampling of we snapped from the ferry.

Backtracking to Midway, we rode through Barrio Logan, stopping in Chicano Park, home to the country’s largest collection of outdoor murals. It is a decades long story about how this Mexican immigrant community had no access to waterfront because of the Naval Base and port and no green space because of the bridges and highways cutting through their neighborhood. When the area under the bridge was designated for a Police Station and Parking Lot, they assembled and convinced the city to use the 8 acres to create an urban forest of art, gardens, playgrounds and gathering space. The murals were so large our cameras could not capture the impact. It is now a National Historic Landmark and evidence of the pride and fortitude of the community.

Leaving the park, we stopped at a local gallery abandoning furniture and art on the street – they were moving and couldn’t take it all. We picked up a framed Art Deco style ode to Amphitrite, wife of Poseidon and mother to Perseus. En route to Midway we made one more stop at the San Diego Central Library. In a skyline shot we thought it was an observatory. As library lovers we wanted to check out the 500k sq ft, nine story building with a three story domed reading room. And use their free WiFi.

Sadly, the library is a beacon for the homeless. On approach the police were on site, dozens of people with bags, carts and tents surrounded the entrances. The bike rack held locked up bikes missing seats and pedals. Not wanting our bikes stripped, we moved on.

Back in tourist central, we passed Padres Stadium, the Convention Center and a salon where Sheri would get a haircut before taking the ferry home. And then we hit the highlight of the day … (as recounted by Eric)

Boarding the USS Midway, the first thing that hits you is the smell.  The docent’s call it the Midway smell, but all the aircraft carriers I have been on smell like this.  It is funny how  the sense of smell is the gateway to emotional memory which floods over me.  Part dread, part wonder, I am definitely back on a carrier.

The Midway is a museum, but it has been kept the same way she was on her last day of service 15 years ago, after 47 years of hard duty in the Pacific.  The massive hanger deck houses exhibits static displays of WW2 aircraft, cockpit trainers and a flight simulator.  Tourists stroll around with kids running from one war machine to the next.  Most of the guests are foreign and any number of far east languages are more prevalent than English.  Pushy photo salesmen snap your picture on green screen and look to convert it to a sale of you in a patriotic pose.  Forward on the hangar deck, a theater tells the story of the battle of Midway in WWII in the voices of people who served.  There is a lot to see, do and learn, with a focus on WWII since the carrier was named for the battle.  Behind the scenes, the Midway sits authentic, if not functioning, with her fire fighting AFFF (aquaeous fast forming foam) lines, steam conduits, thousands of miles of cable runs,  and dozens of water-tight hatches,

Most of the tourists are completely clueless as to what they are observing.  Docents are identifiable by their age (old), sex (male), khaki pants, and yellow ball cap.  They are volunteers who have served time on a carrier.  Many wear the familiar flight jacket, with patches to indicate their resume of aircraft, squadrons, and cruises.  Now they proudly sport a new additional patch indicating how many hours they have volunteered.  All are very friendly and eager to share their stories of time served at sea.  Some of the sea stories are dated and come with a heaping dose of nostalgia of a simpler time when the Midway was home to 5000 men who bravely served at sea and wrote home daily to wives or sweathearts awaiting their return.

Up on the flight deck the variety of aircraft is awesome.  The venerable A-6 Intruder holds the most prominent position ready for launch on Cat 2 with a full load of ordnance (bombs).

Cat 1 holds an F-4 Phantom.  Both were quite accurately the reason that the aircraft carrier was so respected around the world.  The Hollywood favorite, F-14 Tomcat, is positioned in a line to the side which is surprisingly accurate.  Except for scoring a major box office hit, it never impacted world events the way the other two did in the Vietnam and Gulf War.  While the gift shop is an advertisement for Top Gun 2, someone clearly knew what they were doing when they set up the flight deck.

A former fighter pilot docent holds court for 20 of us trapped listening to him explain how aircraft are landed in an explanation full of jargon and acronyms.  We were promised video of carrier landings, but after 15 minutes he has only told us about his extensive resume (it is, but so what?) and personal opinion of how good he was at landing.  I nudge Sheri and we stand up and move on which annoys the docent who obviously is not used to having his orders ignored.  Too much flexing for us.

We take a tour up through the superstructure of the ship called “the island.”  It is perhaps the most realistic part of the visit.  Guests strike their head on the metal hatches that partially block the narrow and steep ladders we use to ascend to the top.  Primary Flight, where all air operations are orchestrated by the Air Boss is cramped and hot.  Narrow cat walks with low railings and large drop-offs to the water below connect us to an equally stuffy ship’s bridge.  We duck behind the ship’s bridge into the Combat Information Center, a clostrophobia inducing windowless room full of radar screens and weapon control consoles.  Except for some high-energy boys pretending to fight a space war, most of the guests are eager to get back to the more hospitable hanger deck, or perhaps their hotel room.  Ahh, that is how I remember it.

Overall, the Midway is a fantastic museum for what it gets right.  You can stroll down long passages inside the ship clipping your shins on “knee knockers” when you forget to high step every seventh step.  It captures the smell and feel of a carrier as a dangerous and uncomfortable place to live and work.

The sheer outward size fools you into thinking it is not a maze of passages and small compartments, cramped and uncomfortable – which it is.  The flight deck is spacious, with a fantastic selection of perfectly maintained carrier aircraft.  Perhaps that misses the mark since I recall it has thrilling place full of impossibly loud aircraft spewing noxious superheated exhaust as they slammed into the landing area.  I guess that would make for a terribly dangerous museum.

It was a fun throwback visit.  I didn’t long to regale tourists as a docent, but I did enjoy the memories it brought back and sharing them with Sheri.  And, like most trips to the carrier, I was ready to get off and head some place comfortable after just a few hours.  This time I could!

As we watched the sunset with the other commuters on the 5pm ferry, we thankfully agreed those days are over and we are living happily ever after.