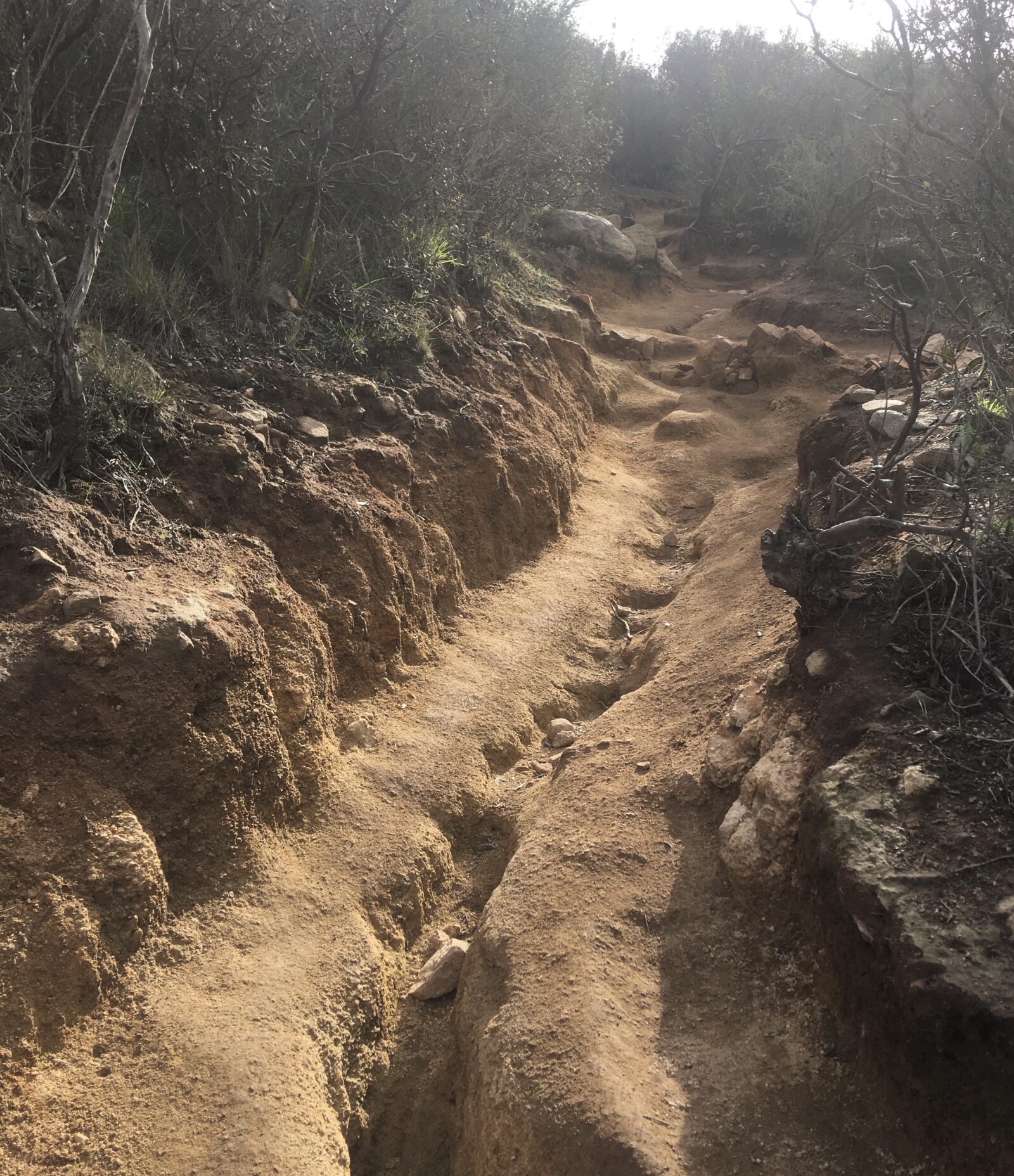 After 10 days of biking, hiking and touring San Diego our bodies feel the use. It’s not really aches and pains. Sore hasn’t set in and deterred us from activity. We don’t know the right word, but it’s the aftermath of exerting energy beyond our comfort zone and feeling it all over. Hobbling is involved, in a good way, and it works itself out and we keep going.

With 3 days left in Mission Valley, we decided to lean into the used feeling and bust out another peak, this time the shortest one with the steepest grade, Kwaay Paay (Kway Pay).

The trailhead is just past the Old Mission Dam, a fast moving 8 miles down Mission Gorge Road and past the park’s visitor center on Father Junipero Serra Trail.

Serra founded 9 Spanish Missions in California in the 1770s to convert Native Americans to Christianity and secure control of California’s trade routes and shores before the Russians pushed in from the north. Sickly but successful, he and the troops brought diseases from Europe that killed 150,000 and placed the other 150,000 in forced labor camps. It was business as usual for colonial expansion at the time as the world’s super-powers in Europe divided up the new world. Pope Francis canonized Serra on his last visit to the US and now we ride the paved trail in his name.

At this angle we are thinking easy breezy, even thought the sign says 1.2 miles and difficult. He’s a merino wool socked Merrill, she’s a barefoot Keen and together they are mountaineers on a 5 peak mission. Sheri is hiking with her Asheville backpack containing lunch, water, bug spray and binoculars.

This damp red dirt hike was easier on the footing than the dry service road of Cowles and the rockiness of Fortuna. The vertical comparison is another story. We discovered there is a big difference between Bike Fit and Hike Fit. With the Como’s pedal assist, we are bike fit. We can use the gears and motors to our advantage and move about town at high speeds and for long distances now that our saddles are broken in.

Hike fit is how the body moves up and down the mountain and how the heart feels about that. This hike produced heavy breathing, rolling sweat in the eyes and running nose combined with calf stretch, back bend and hip displacement.

You can’t always put one foot in front of the other. This was a straddle pass, other times we were doing calves up/quads down and sometimes there was a boulder crawl. For anyone wanting a leg busting aerobic workout, pick Kwaay Paay Summit Trail every time.

The Paay-off is spectacular.  From atop Kwaay Paay peak, we looked north to North Fortuna peak. With the compact field glasses that we finally remembered to place in the hiking pack, we could make out the prominent rock formation where we ate lunch the day before. The magnification also gave us a good view of Marines Corp Air Station Miramar. The large airbase was made famous to the public when it starred in the 1986 blockbuster, Top Gun, as Fightertown USA. While the F-14 aircraft aged and retired, the star of Top Gun, Tom Cruise, did not. Cruise was reportedly seen filming in the area last year, and Top Gun 2: Maverick is rumored to be coming out summer 2020 .

Perhaps Cruise will play a Marine Colonel, since Miramar transferred to the Corps in 1993 while the Naval Fighter Weapons School (Top Gun) was relocated to Fallon, NV.  We watched Marine V-22 Osprey aircraft depart Miramar and head west, perhaps to expansive test ranges in Yuma. They departed like helicopters, and then tilted their twin giant propellers forward and sped away like airplanes – cool! Then, a pair of F-35B Joint Strike Fighters sped in from some test range over the Pacific Ocean and made a commotion as they entered the landing pattern. It was good entertainment for Eric as we finished lunch, a rudimentary version of Sister Karin’s party board and refueled for the descent.

Back out Father Serra and up Mission Gorge, we stopped at Vons for provisions and into Admiral Baker to grill a salmon and squash dinner. Deciding what we would do on our last 3 days in Mission Valley, we landed on Balboa Park. Although we will not be completing the 5 peak challenge, we take the almost words of Meatloaf to heart, “Don’t be sad, because three out of five ain’t bad.”