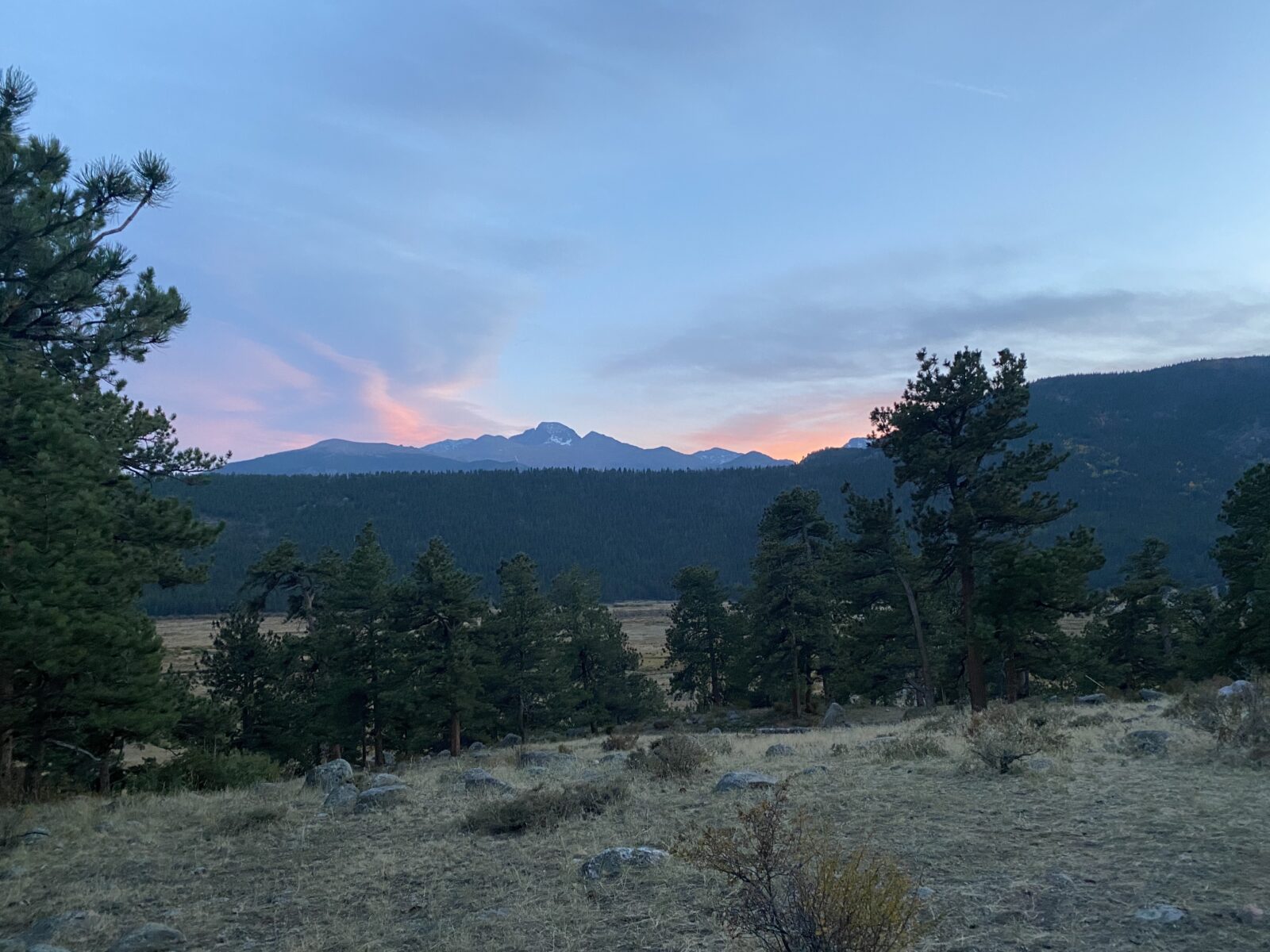 If Black Canyon of the Gunnison National Park is less known to the general public, then the parks on the other side of the Rocky Mountains – those that butt up against Denver – are known far too well. The cooler fall weather gets the Aspen trees to changing colors, the elk to migrating, and the residents of the greater Denver metro area flocking to the great outdoors to experience it all. It was in that environment that we planned a meet-up with family to pull-off a five day drop-in in Denver on their travel east from a trip to the west coast.

Suburbia abruptly ends where the canyons leading into the Rockies begin, just outside of Golden, Colorado. The mile high city of Denver does not seem so high in altitude once we climbed above 9,000 feet to encamp at Golden Gate Canyon State Park. The loops with electric service were full and included a $225,000 Bowlus Road Chief being towed by a sporty new Land Rover. Being the closest true wilderness to Denver, Golden Gate Canyon is a popular weekend getaway for the walleted urban crowd.

Our guests matched the electric Comos against the steep grades of the park roads while Eric nursed a rib injury back at camp. They returned with tales of angry moose encounters along with the all important photographic proof. Together we hiked to an overlook from which we could see the stunning valley of golden Aspen changing colors blazed against a sea of green pines. We looked through the spy glass at our next destination, easily visible 50 miles to the north in the heart of Rocky Mountain National Park. At night, the Milky Way blazed across the Dark Sky as it can only do at altitude in humidity-free air miles from any man-made light.

Traveling the hairpin Peak to Peak Highway, we snaked through eclectic Nederland and into a bustling Estes Park, the quaint (to some) town feeding the visitors at Rocky Mountain National Park. The campground fully books as soon as the reservation window opens during Elk migration season in the fall. Unknowingly, we planned our visit in the heart of this busiest event. Sometimes an early cold snap scares the crowds away, but this year a late indian summer did just the opposite and brought them out in force. Luckily we had picked up a last minute cancellation for a campsite in the Moraine campground, right on the ridge overlooking the valley of migrating elk proving once again that it is better to be lucky than good at what you do.

Our guests, having opted in for the full camp experience, got to unpack and pitch camp themselves. With their fabric house staked down, they went for the uber-challenge 9 mile hike to Sky Pond while we marveled at how little oxygen was in the air and agreed to keep a watch on the migrating Elk right in front of us.

They coincidentally returned just in time for happy hour with tales of waterfalls and wild marmots and sore legs. We filled them in on the slow movement of the Elk which were still right in front of us, along with an action packed tram ride to Sprague Lake. Each night the warm summer wind howled and shook Roxie like an amusement ride while our guests felt the full force of the mountain winds perched in their precariously staked down tent on the ridge above the valley. City life it wasn’t.

The airport shuttle to Denver, which looked amazingly like a Ford Pick-up towing a 30 feet fifth wheel, left promptly at 6 a.m. which meant that pack up was done under headlamp long before the sun came up. As we exited the park in the dark, the crowds were already queued at the entrance to grab the best roadside spots for Elk photographing. We descended out of the mountains until Denver International Airport’s familiar giant white tent structure came into view. We were the only 55 foot rig at United Departure but nobody seemed to mind. Where was Homeland Security anyway? As the guests waited to board, we got a head start on the race east. By the end of the day, they had won but we had put Denver a respectable 650 miles behind us.

The official vegetable of the United States should be an ear of corn, because that is pretty much all you see from Denver to Chicago. In two monotonous days of driving we watched the farm belt close shop on another growing season as huge combines threw up giant clouds of corn dust crossing endless fields. We pulled into Indiana Dunes National Park weary from the road, but ready to add another National Park visited to our list.

Sitting on the southern shore of Lake Michigan, wedged between two enormous power plants, is a beach with some sorta high dunes. A former National Shore, Indiana Dunes made the varsity team coincidentally with the elevation of the state’s former governor to V.P. Friends in high places may help with a designation, but it cannot fix the basic issue of the National Park being a beach and marsh about as impressive as your normal beach and marsh. All we can say is that transitioning from the epic grandeur of America’s west to the urban sprawl of a beach east of Chicago is not easy. Check – sticker please.

A relatively short drive east found us collecting another National Park sticker. Cleveland’s very own Cuyahoga Valley National Park is a great example of the power of conservation. The river running through the valley which used to routinely catch on fire now looks a whole lot cleaner. Cuyahoga Valley is advertised as a place to renew your spirit just as the valley’s protection under its designation as National Park has renewed its spirit.

It is a lovely thought and a treasure for the people of Cleveland now that they have once again lost Lebron James to the Lakers. Fortunately for us, we were able to renew our spirit quickly as we had quite a few miles left in our return trip east.