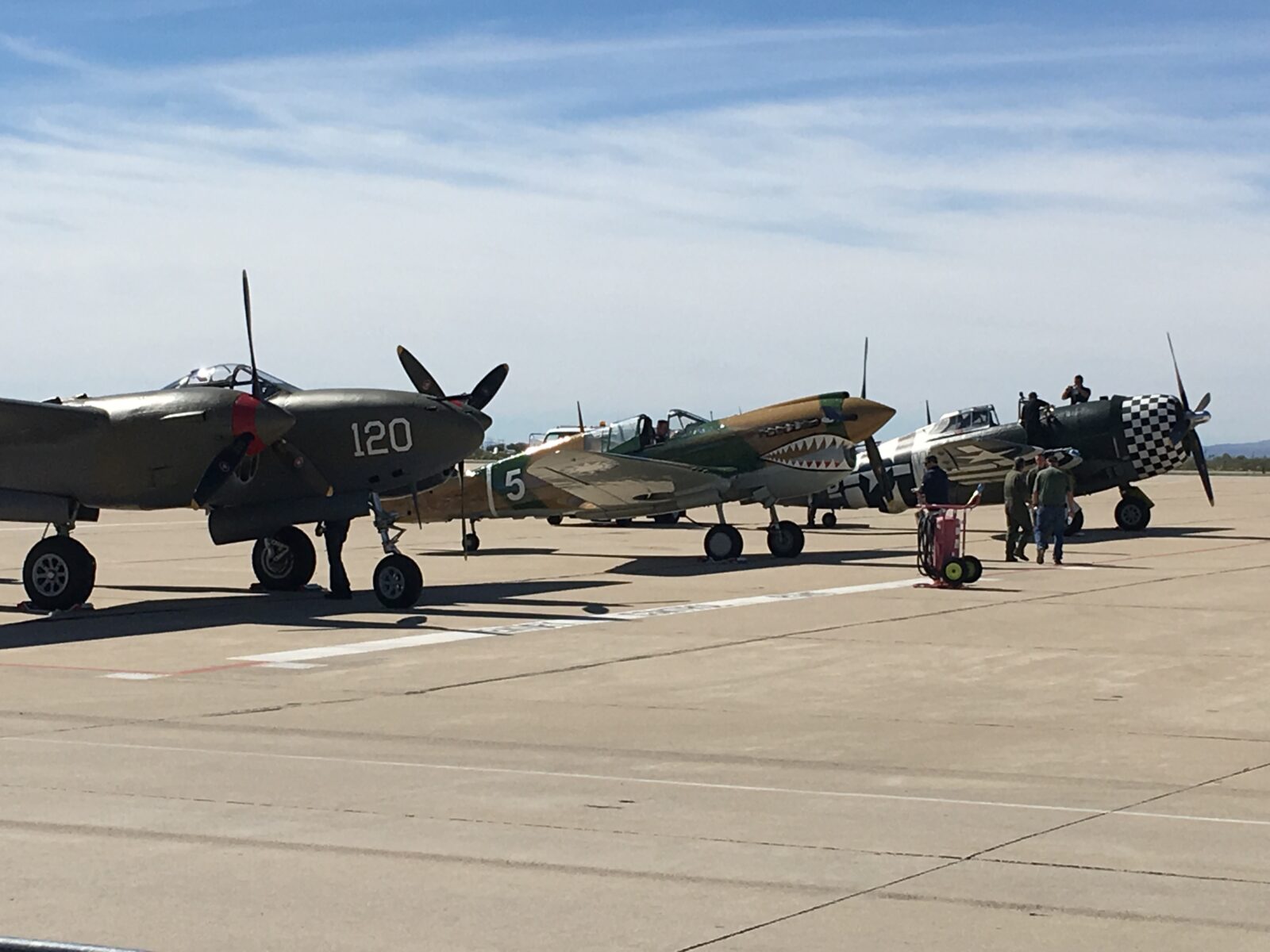 When we arrived in DM the folks around us asked us if we were here for The Show. We had no idea of what they were talking. We soon figured out that the show was a bunch of vintage aircraft that flew overhead in company with modern fighters. It turns out, that’s a thing. It started in 1997 on the 50th anniversary of the US Air Force and it has been going on since.

An organization in Houston, Texas owns and flies very rare WWII and Korean War vintage airplanes. Now, technically, they were part of the Army Air Corps prior to 1947, but the Air Force claim is that they represent a flying museum of their past. For folks that love airplanes, these are the ones that got voted into the All Time Hall of Fame: The P-51 Mustang, P-38 Lightening, and P-47 Warhawk. These are the babies that won WWII and have semi-religious status.

The folks in blue also detail some lucky active duty pilots to team around with these vintage planes, except they are flying their modern rides; like the F-22 Raptor and F-35 Lightening II. While they are not the Thunderbirds which is the Air Force version of the Blue Angels, they do put on a helluva flight demonstration individually. The whole thing is wrapped up in an organization called the Air Force Heritage Flight Foundation, or by the folks at the check-in at Agave Gulch RV Park, “The Show.”

Once again, we found ourselves riding our bikes right out to the flight line for the Friday practice. We should have had hearing protection. We should have had sunscreen. We should have had telephoto cameras. Nevertheless, we joined in with a small crowd at the fence line and watched some incredible flying from the most amazing aircraft in the world. Now, the Blue Angels are special, and beautiful, and really well rehearsed. They are like watching ballet in the sky. But, they are in 4th generation F-18 Hornet fighters: 1980’s technology.

What we saw were the latest 5th generation fighters showing off their most extreme maneuvers. The newest star was the F-35. It accelerated straight up and tightly turned in ways that physics would say an aircraft cannot. But, with America’s best secret technology in the design, it did. The $340 million dollar a copy F-22 Raptor put on a show that kind of convinced you that it’s worth it – at least it will be if some bad country tries to get funny. Also at the show were an F-16 Falcon and A-10 Warthog who they sent out first to warm up the crowd.

When the big boys are done showing off, they get together with the vintage aircraft which by the way are far shinier and prettier, and they fly by in a surreal formation of old and new. If the designers of the show wanted to stoke some patriotism and nostalgic pride, they succeeded. We took it all in on practice day while the Airman Relief Society flipped burgers and the professional photographers got their publication shots. Tomorrow is the real deal where thousands will pack the field for The Show. We plan to be miles away at a flea market, having fallen in to the VIP thing today.