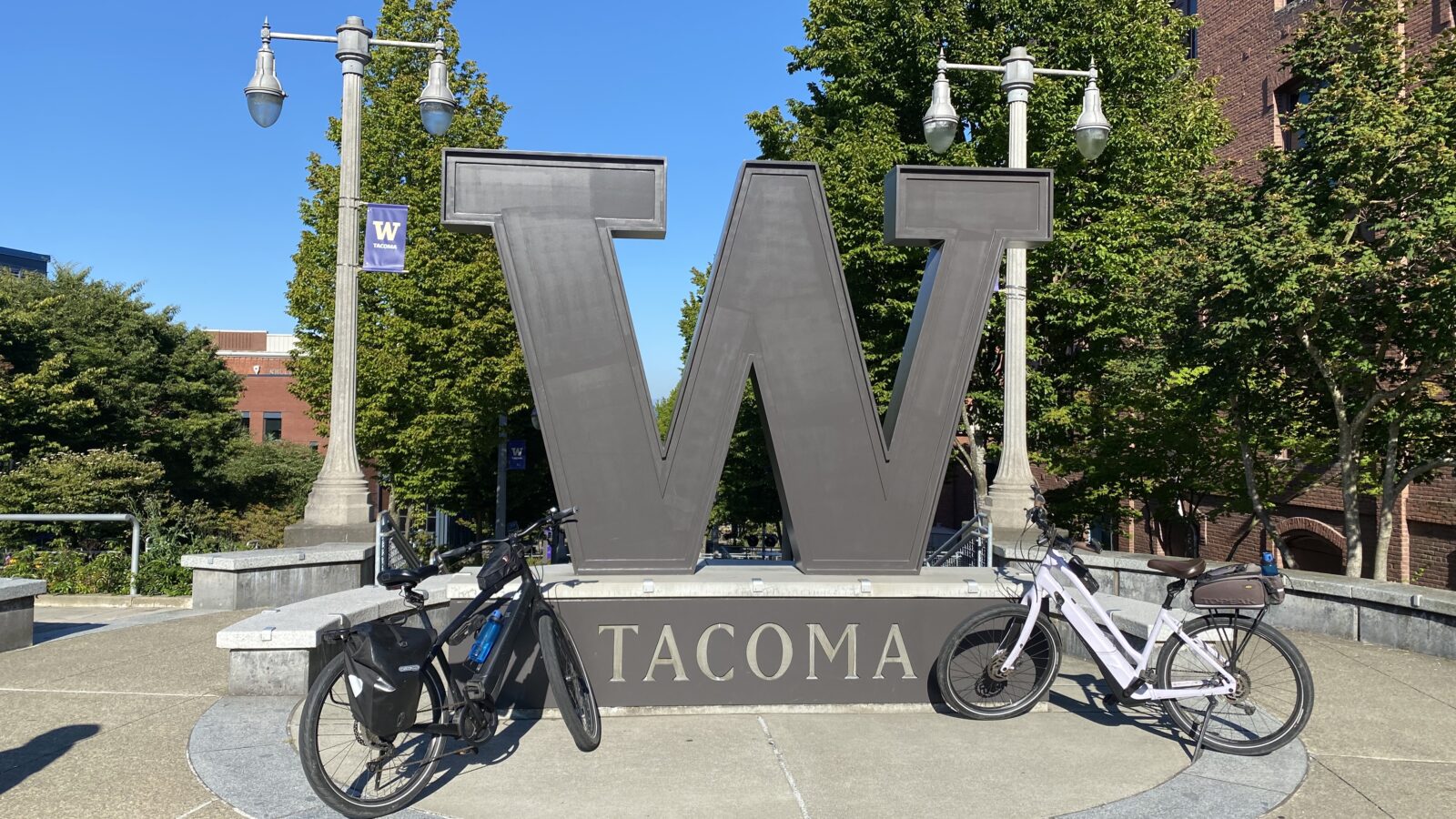 Sometimes you gotta get out of the rainforest, off the beach, down from the mountain and get some urban livin’.

Nine miles southwest of Joint Base is downtown Tacoma, home of world renown glass artist Dale Chihuly and launching pad for a get around day trip.

Chihuly in the City

Although the Museum of Glass is covid closed, the Bridge of Glass and other outdoor sculptures are a dramatic reminder of all the other places we’ve seen Chihuly in our travels. Chihuly is a hometown Tacoma guy who crafted fantastic glass pieces in his youth. When he lost an eye and use of an arm to accidents in the 1970s, he hired people to actually blow the glass for his sculptures. He became the most famous glass artisan in the world who, surprisingly, does not make any of the pieces. Admiring the outdoor work we left with this unanswered question: Is idea and design more valuable than the art and craft of execution? Is a Picasso a ‘Picasso’ if Pablo instructs his talented friend on what to paint, or is the piece just manufactured, like a Coach bag?

City center streets around University of Washington were downtown ghost town so we stuck to the Foss Waterway route where working Port meets watersport in the watchful eye of Rainier. Families sat on the docks while boaters partied on their bough and skater dudes got filmed by guys in Volcum vans down in Thea’s Park. Sunny Sundays in August where temps soar into the 80s are precious in Tacoma. The city was all out getting their Vitamin D fix before hibernation-time arrived in the fall (their word, not ours.)

Like most city bike routes, paved and protected ends where sidewalk speedway begins. You follow the bike route signs and don’t expect to find yourself going the wrong way adjacent to a 55 mph highway. But so it goes, where two miles are white-knuckling past a fellow rider and the next two are wide open with the walkers, go carters and scooters watching coeds play frisbee and kids eat ice cream. No doubt, biking is the absolute best way to capture the vibe of a city.

Off the water and into the Stadium district, we were mapped for Dystopian Brewery but happened upon Odin and when Valhalla calls, you answer. The red ale, Odin’s Gift, and Belgian Strong Dark Ale, Thor’s Equinox soothed our bike ache while a shared plate of Sif’s light lager battered fish and chips filled the tank for the ride home. In Washington, you go to the website to read the menu and you wear a mask if you’re not sitting at your table. You can still eavesdrop on your neighbors on a first date, where we learned about intermittent fasting and how beer with a stromboli sub factors into that.

About an hour north of Tacoma is Poulsbo, a Scandinavian heritage town where Slippery Pig Brewing serves Baldur’s Blonde and Sluy’s Bakery offers the Viking Cup, a cinnamon pecan bundough with or without cream cheese. Founded in the 1880s by Norwegian and Scandinavian immigrants who were familiar with how to pull fish out of cold water, Paulsbo was famous for the Dogfish catch that the immigrants pulled from the adjacent Dogfish bay. When hawking fresh Dogfish failed to bring in the tourist crowd, the city changed the name of the bay to Liberty bay, and pivoted to a Scandinavian shopping theme. It worked like a charm. The town was packed with masked tourists lining up for an appropriately socially distanced outdoor table to dine. Those Norsemen may be fierce but they are equally clever. We shopped our way through quaint artist’s waterfront village centered on all things Norse. If we only had a house to store more impulsive purchases.

The opposite of quaint is commonplace, which might be a nicer word than a tourist might bestow on the city of Puyallup. Looking for more places to ride bikes, we took to the Foothills trail, billed as a 30 mile collection of six unconnected segments through farming, coal-mining and logging economies at the base of Mt. Rainier. This is largely true but they might add drug dealing to the list as the segments we rode had a high degree of trash and tweekers, mostly minding their own business and hoping we weren’t cops. Addiction is real no matter how stunning the backdrop.

We also visited the towns of Lakewood for the Walmart pharmacy and maple heaven at the Original House of Donuts, Lacey to re-up on our most favorite individually frozen Wild Alaskan Sockeye Salmon at Costco, DuPont for the family dentistry that could do an emergency appointment for Eric’s cracked molar. In our short time living in Washington state, we’ve found amazing places to live, camp, shop, recreate and avoid. Like The Beach Boys, we get bugged driving up and down the old same strip. Time to find a new place where the kids are hip…