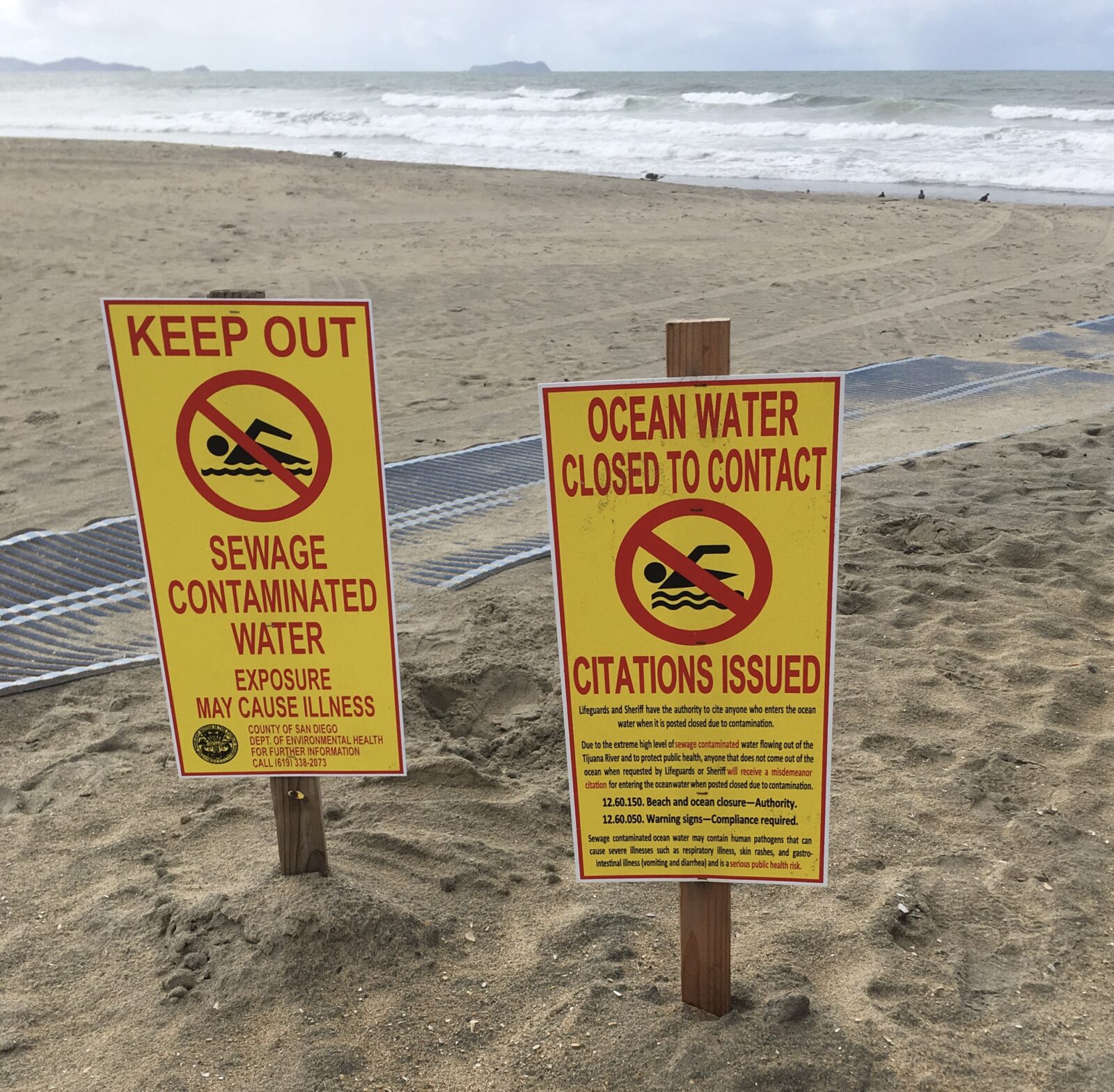 San Diego is America’s southern most city on the west coast bordering Tijuana, Mexico.  The Tijuana River flows 100 miles through Mexico, then through the city of Tijuana before crossing the border for the last 5 miles and emptying into the Pacific Ocean just south of San Diego at Imperial Beach.  On good days, 100% of the water from the river is diverted into a sewage treatment plant in Mexico before it spills into the ocean.  On days when it rains, the diverters are closed to protect the plant from irreparably flooding.  On rainy days, 100% of the river, which is essentially untreated sewage, flows directly into the ocean.  The off-shore currents take the polluted effluent up the coast, making the beautiful beaches along Coronado Island unsafe.  Tragically, one third of the year saw the waters at Imperial Beach closed to swimming.  On many days, the closure extends 10 miles north to Coronado. We think the sewage treatment plant needs to be fixed and Mexico should pay for it.

When the rain let up briefly this morning, we grabbed the paddles and headed to Silver Strand State Park.  Scary yellow signs greeted us in English and Spanish warning us to stay out of the water.  The Park Rangers explained that the water had just been tested and bacteria levels were dangerously high.  55 degrees and windy, we had no intention of jumping waves but the sand was wet and the ball would sometimes roll into the surf’s edge.  It felt a little risky, and perhaps that is silly.  We played barefoot beach paddleball nonetheless, alone on the beach – just us and the scary signs. When the wind whipped up and our arms slowed down, we hopped on the Comos and rode south to Imperial Beach.  The sucker hole was still open, but just barely so.  The 13 mile Bayshore Bike path runs all the way to Imperial Beach.  We sped along, sometimes in a light drizzle, past the large construction project at Naval Base Coronado, the new Navy training center with an oceanfront view.

Between the low temperature, rain and beach closure, Imperial Beach was deserted.  We walked the 1000 feet pier, greeted by one lonely pelican who seemed pleased with the company.

An empty grill at the end of the pier flashed a neon OPEN sign. We passed on being the first and perhaps only guests that day.  The surf looked the same as the unpolluted water 2 days ago.  Large waves broke offshore but no surfers were allowed to partake.

The sky partially cleared and the sun peeked out so we set out to find the highest rated ice cream in the area at Famous Oasis.  The unassuming strip mall store sandwiched between a hair and nail salon had been in the same family for 30 years and specialized in Mexican-style ice cream.  Eric ordered the Rocky Road, and figured Mexican-style meant icy with no nuts, fudge or marshmallows.  Sheri fared much better with a fresh and creamy pistachio. At $1.90 a cone, it was a joyful respite.

With the sun out, we soaked in the warmth to combat our damp clothes and bare feet.  As we leisurely bike north, we looked up and realized that we were the suckers in the sucker hole.  Black skies, rain and wind stretched out to the north.  We cranked up the assist and pedaled hard into the squall.  The ride back was surprisingly quick since we were moving at 25 mph. That was our only comfort as the cold rain soaked us on our return.