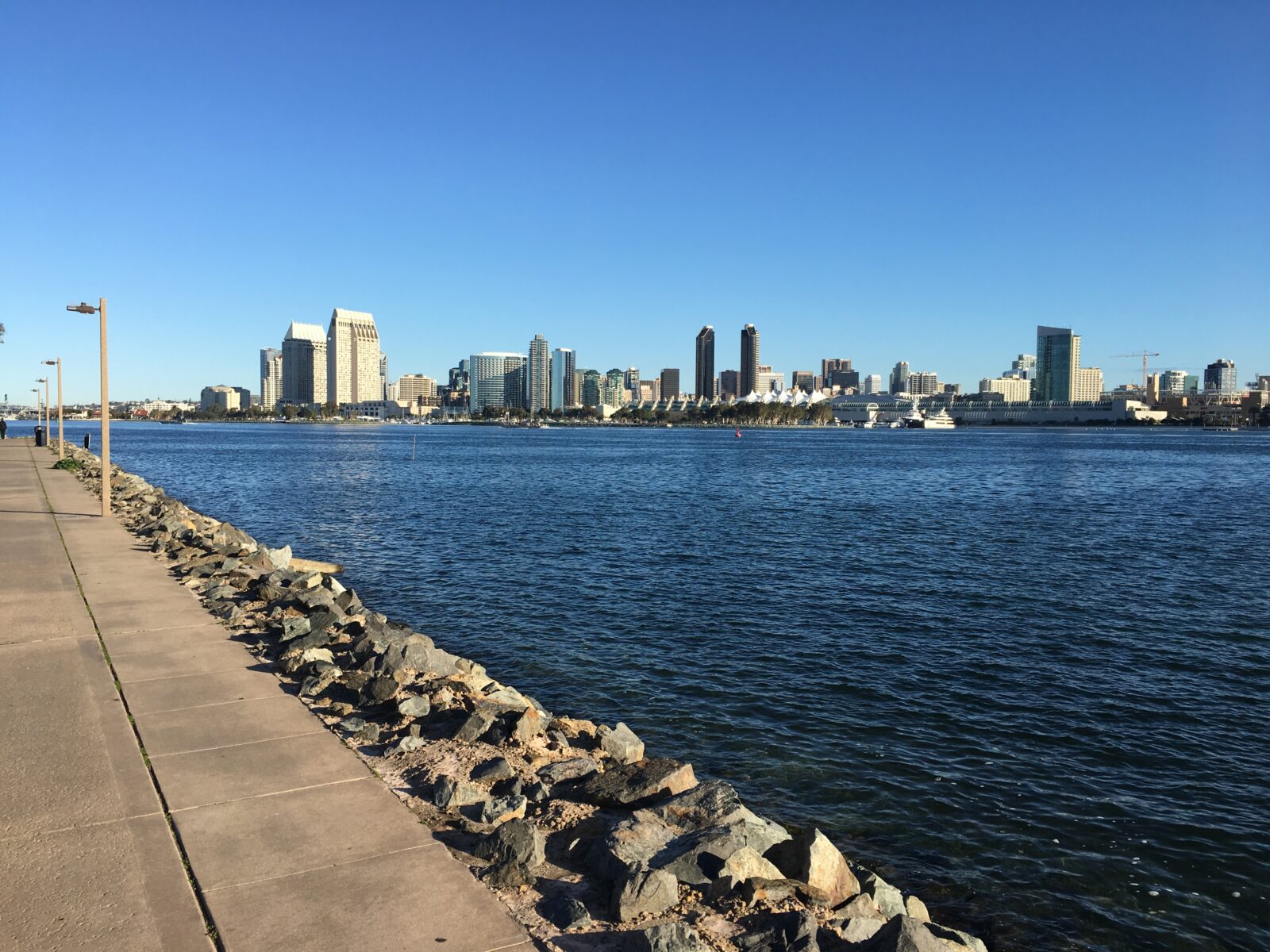 With two days left in our 25 day exploration of San Diego it seemed appropriate to visit Cabrillo National Monument which honors the first European man to step onto west coast land. A windy 55 degrees, we layered up for the 15 mile one way ride taking us into downtown Coronado, past the Del, marina and golf course; under the big bridge, around Tidelands park and ferried across the bay; into Midway and hugging the waterfront past the Maritime museum, more marinas, Cancer Survivor’s Park and the Airport; arriving Point Loma, through that downtown, into Naval Base Point Loma front gate and out the back gate, past the Fort Rosecrans National Cemetery, summiting Cabrillo where we bought a National Parks Explorer Pass and toured the museum, visitor center, lighthouse and tidepools.

We’ve come to realize that San Diego is the city of views. It doesn’t matter where you are, there’s always a view worth taking in and talking about. The heavy rain and wind had blown away the humid haze and without a cloud in the sky we could see everything just as it is, without the misty filter that had been hanging over for the past month.

Life along the Bayshore Bikeway was in motion yesterday. Navy platoons were running PT, every golf tee had a foursome, dinghies were ashore from their moorings, pickup soccer playing the park and a line formed for the commuter ferry while a Ticonderoga destroyer cruised into port. Perhaps we’re seeing it through romantic eyes but it’s hard to believe this could ever get old.

The stretch from Broadway Pier where they ferry comes in to the entrance to Point Loma is a waterfront trail shared by bikes, joggers and walkers. Marinas to the left, cars to the right, the busy airport shuttling people in and out every two minutes.

Coming into Point Loma, we passed the Navy Annex and detoured through the submarine home of Naval Base Point Loma. Signs in town and on the base welcomed home the USS Alexandria, a fast-attack nuclear submarine, after its recent deployment to who knows where. The base has a mysterious feel to match the mystery of these stealthy underwater marvels of engineering. Since no on-board visitor tours were being offered to match the Midway experience, we toured around finding the MWR facilities, Navy Inn & Suites, NEX, and other points of interest for retired folks.

Making the big climb from the coast to the summit of Pt. Loma on Cabrillo National Monument, we shed layers as we warmed. At the top of the ridge, the 78 acre Fort Rosecrans National Cemetery made for stunning, if somber, views.

The old light house at Pt. Loma overlooks the entrance on San Diego harbor. It had a brief life of only thirty years because the hill it was on was too high. On a clear day you could see it from 35 miles. The problem is, you don’t need it on a clear day. On stormy days, you could not see it at all because its extreme elevation put it in the clouds. It did serve its purpose of keeping this magnificent piece of land with views that stretch to the Rocky Mountains from being developed. Mission accomplished.

The channel into San Diego had warships, racing catamarans, and SEAL boats running in and out of it all morning with SH60 Seahawks and F18 Hornets overhead. In the days of Cabrillo, San Diego was avoided as a port because the channel only ran 20 feet deep. After the United States dredged it to 60 feet, the bay opened up to the development of the commercial port. Los Angeles, 120 miles to the north, has a commercial port far better suited to receive goods from southeast Asia, so to our untrained eye it looks like San Diego only locked down the Dole Pineapple trade. San Diego is happy with that, because it left San Diego to the Navy who lined the bay with ship, submarine, and amphibious bases. San Diego is a Navy town – like Norfolk, VA on the east coast, but pretty – and no winter.

Having burned the God’s eye images on San Diego into our retina, we made one grueling descent and climb to the tidal pools to grab a PR shot for Specialized, then launched back down the descent into town.

Our RV repairman in Tucson swore by Mitch’s Seafood as a “must-do” restaurant. Even though the waterfront was sparsely populated with tourists on this chilly February day, Mitch’s was packed, always a good sign. We ordered the grilled fresh opah fish sandwich and enjoyed the view of the working fishing port from the sunshine of the back deck.

All good things eventually come to an end, and the sun sitting low in the sky told us to hurry up. A quick detour through the Naval Base Point Loma Annex helped us find 5 RV sites at the base marina that could act as a back up if the Cove is full. No hook ups at all, but shower and bath house could make it an option for a night or two. Joining the commuters, we caught the 4pm return ferry to Coronado. We had plenty of battery left, even after 40 miles, but the mid-fifties temp and chilly wind had taken their toll. We were happy to relax in the rolling condo at the Cove just as the sun was setting. What a view.