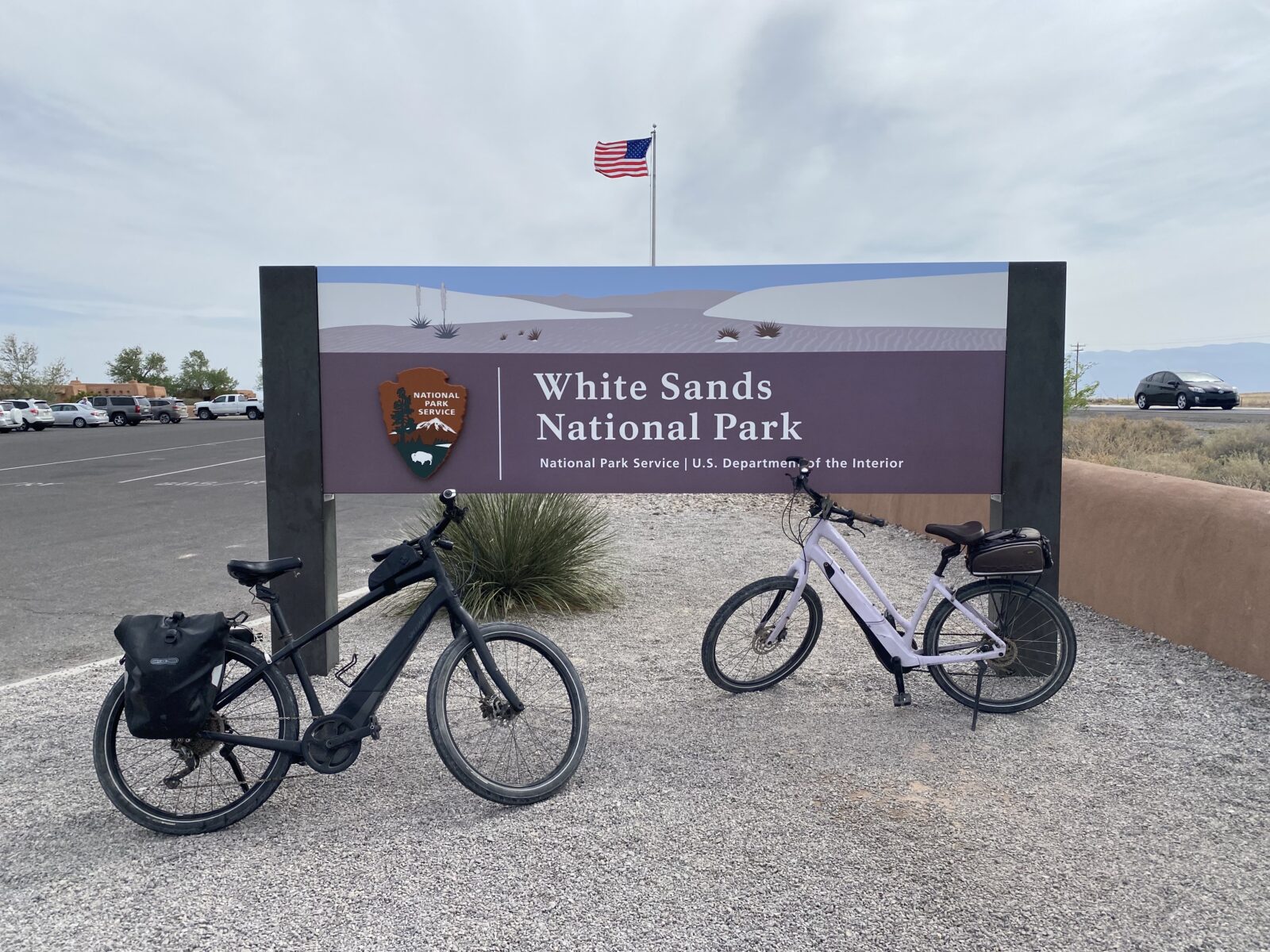 For 86 years, the sugar white gypsum sand dunes near Alamogordo, New Mexico were happy to be designated a National Monument. Sometime in 2019, language got inserted into the 2019 Defense Act and Boom! White Sands got its upgrade to National Park. That’s how congress works. With the right influence, you can get a new bridge, road or library in your town or you can get a National Park. National Parks bring more visitors.

Lots of times people just drive by National Monuments. Proof in point, in 2018 we drove right by White Sands National Monument. Now that it is a National Park, we came to be awed (and to get the sticker).

With Roxie settled on Holloman AFB seven miles down the road, we had 10 days to tour the White Sands. In no way does anyone need ten days, even if you read the exhibits in the Visitor Center really slowly. There is just one road that runs 8 miles into the heart of the big dunes and three hikes. Since we had the time, we planned to serve up White Sands three ways.

When we bought the e-bikes four years ago, they were a mode of transportation. Betty was too big for exploring so we’d park her as close to an attraction as possible and ride the electric bikes to run errands and go see things. When people used to tell us electric bikes were “cheating” we’d ask them if they used the engine in their car or if they pushed it to their destination.

Over the years we’ve put more than 3,000 miles on the Comos, but they sat idle in 2021 as we defaulted to driving as our primary means of transportation. Where we’d easily ride 15 miles to go do a big hike, now we drive 5 miles to go play pickleball. Where we’d ride backroads with no shoulders to the grocery store to stuff 30 pounds of food into the saddlebags and rope a pack of firewood to the rack, now we drive two miles and load them in the back of the truck. What normal people do.

It was time to get back on the Comos and use them like old times to explore White Sands. This was a 34 mile loop, 18 on the highway and 16 in the park with 8 of them on packed sand during the heat of the mid-day fun ride. The high winds whipped the sand in our nose and mouth as tourists in cars zipped by with windows up and AC on.

With the sun directly overhead, the dunes were their least photogenic, looking hot and inhospitable. Fortunately, the National Park upgrade warranted some cool shelters that protected us from being further sand blasted while we chugged water and ate almonds in the shade until we had sufficiently recovered to brave the ride back to base.

Feeling like we missed the photo opportunities on bike being mid-day, we returned to capture the beauty of the dunes at sunrise. As the sun rose, we captured the beauty of the locked gate informing us that the park would open in 45 minutes. As soon as the first ranger opened the gate, we raced to the giant dunes at the back of the park to capture them in as early a morning light as is possible without, it turns out, a permit and 30 days advance notice.

We were fortunate that the overcast sky helped to delay the onset of direct sun and the dunes looked Star Wars spectacular in the cool morning light. Alone in the park, we hiked out into the still silence of Tatooine (nerdy 1977 Star Wars reference) until our F250 Landspeeder was nowhere to be seen.

The San Andreas Mountains provided a beautiful blue backdrop to the subtly shaded dunes. With no wind, the silence was deafening. With no trail markings, we felt lost in the dunes as soon as we crested the first one. It really did feel like another world. By the time we figured out how to get back to the parking lot, three other cars had found us and the spell was broken.

We returned to White Sands for the third and final course a few days later an hour before sunset. The crowds were out for the sunset stroll led by Ranger Tandy.

Under Ranger Tandy’s heartfelt tutelage, we laughed, we cried, we solved the world’s conservation problems, we resolved some early childhood issues, we hugged it out and connected as a community following the example of the gypsum dune biosphere. Also, it made more sense when Ranger Tandy said it.

Regaining our composer after the emotional hike, we plopped our butts down on the soft sand and sat in the silence of the setting sun. For a place that at noon was whiter than white, we could not believe the hues of red, orange, blue and purple that materialized in the landscape.

As good as the iPhone 13 Pro is, it hardly does it justice. On the ride home, cruising the highway at 65 mph for a what felt like an eternity, we watched the sunset over the dunes in the rear view mirror, and wondered how the hell we ever biked that far.