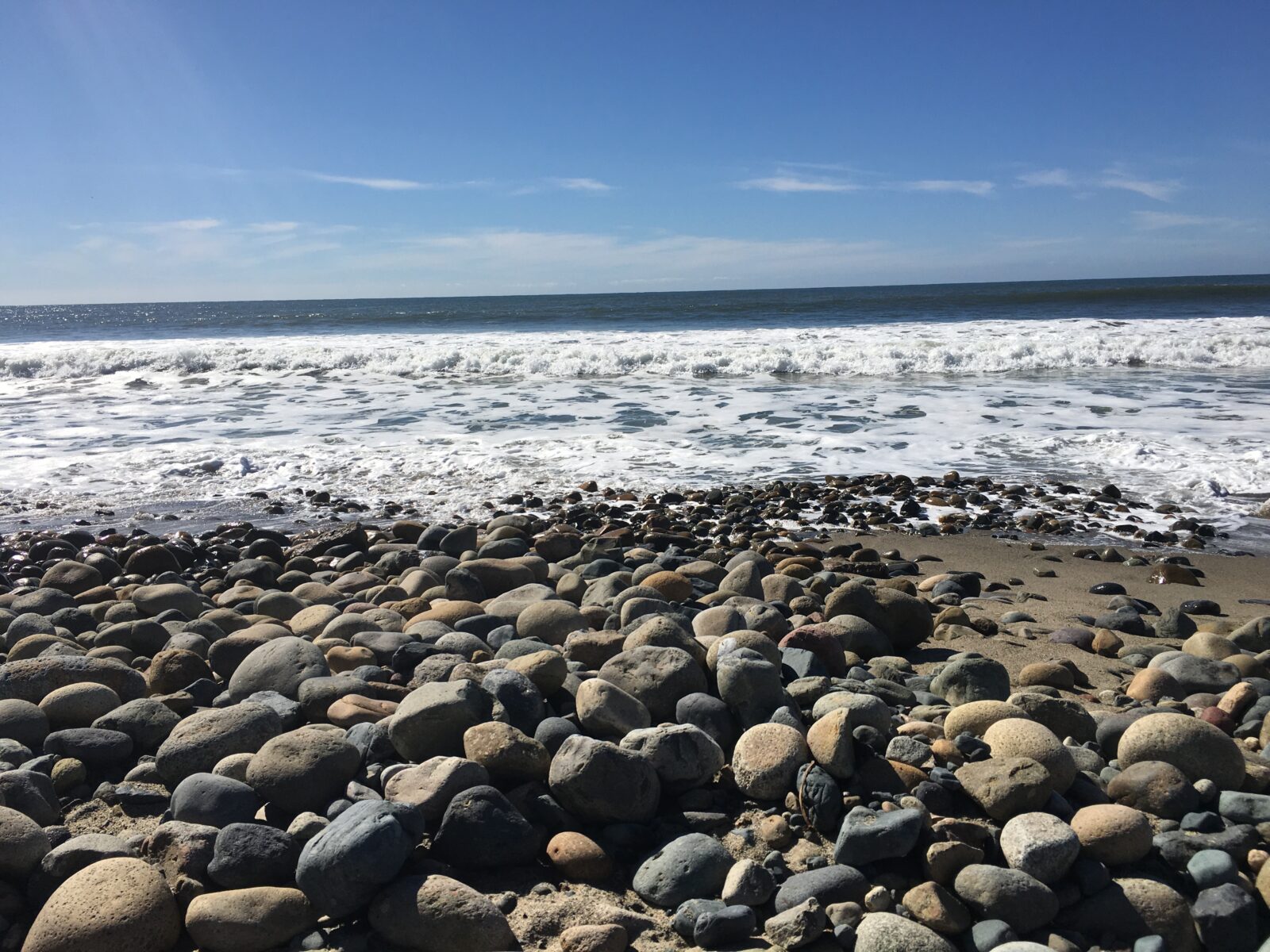 We’ve confirmed that really big cities are not our thing. We’re Tucson and San Diego people, not Phoenix and LA people. Over the weekend we were set up in a perfectly good camp site on a base that also doubled as an underground weapons storage facility and was centrally located to a ton of consumer attractions. We were surrounded by shrubby fields, supposedly strawberries, but no sign of the juicy red fruit. The laundry machines were free, as was the ice, cable and WiFi. It was a full house and there was no reason to leave, but we did. We sat in that perfectly good site and closed the forward curtains because the view was mundane. We put the covers on the Comos because the roads were the mean streets of LA and the destination was a dirty beach or a crowded amusement we did not feel like risking our life for. The highlight was a short family reunion on a rain soaked day. We were in San Diego withdraw. Without debate, Eric picked up the phone and hit speed dial for the Cove. Lucky again, they had one spot open through Friday and just like that, we took it. 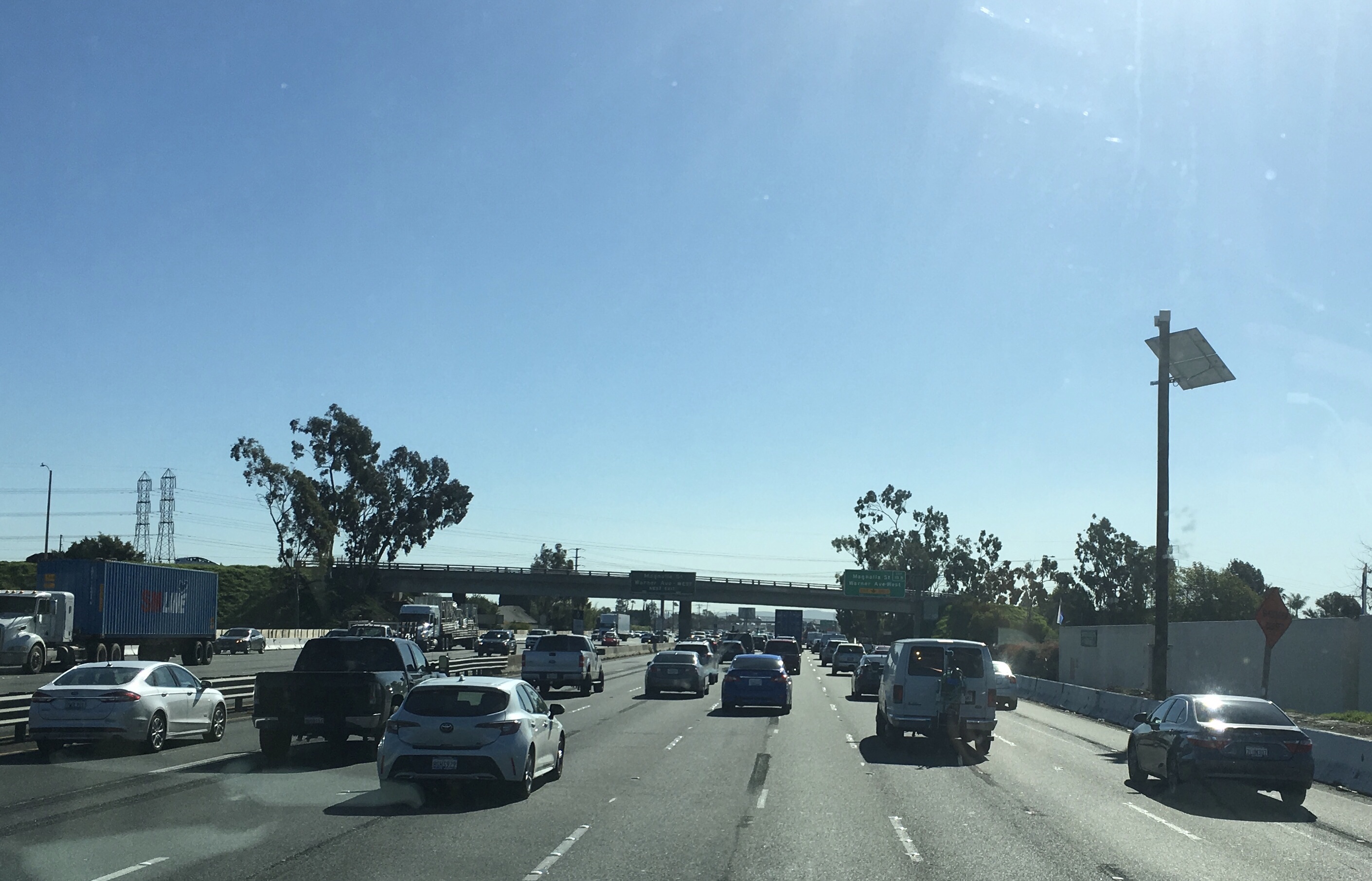 Leaving Seal Beach, we skipped the narrow passage through the designer beach towns from Huntington to Dana Point and opted for the interstate 405 to the 5. The 405 is famously popular in LA and today was no exception. There were lots of 405 fans out and about. Wanting to make the most of our reposition decision, we marked the last expanse of unspoiled, undeveloped coast in SOCAL on the map and set our sites on Marine Corps Base Camp Pendleton. 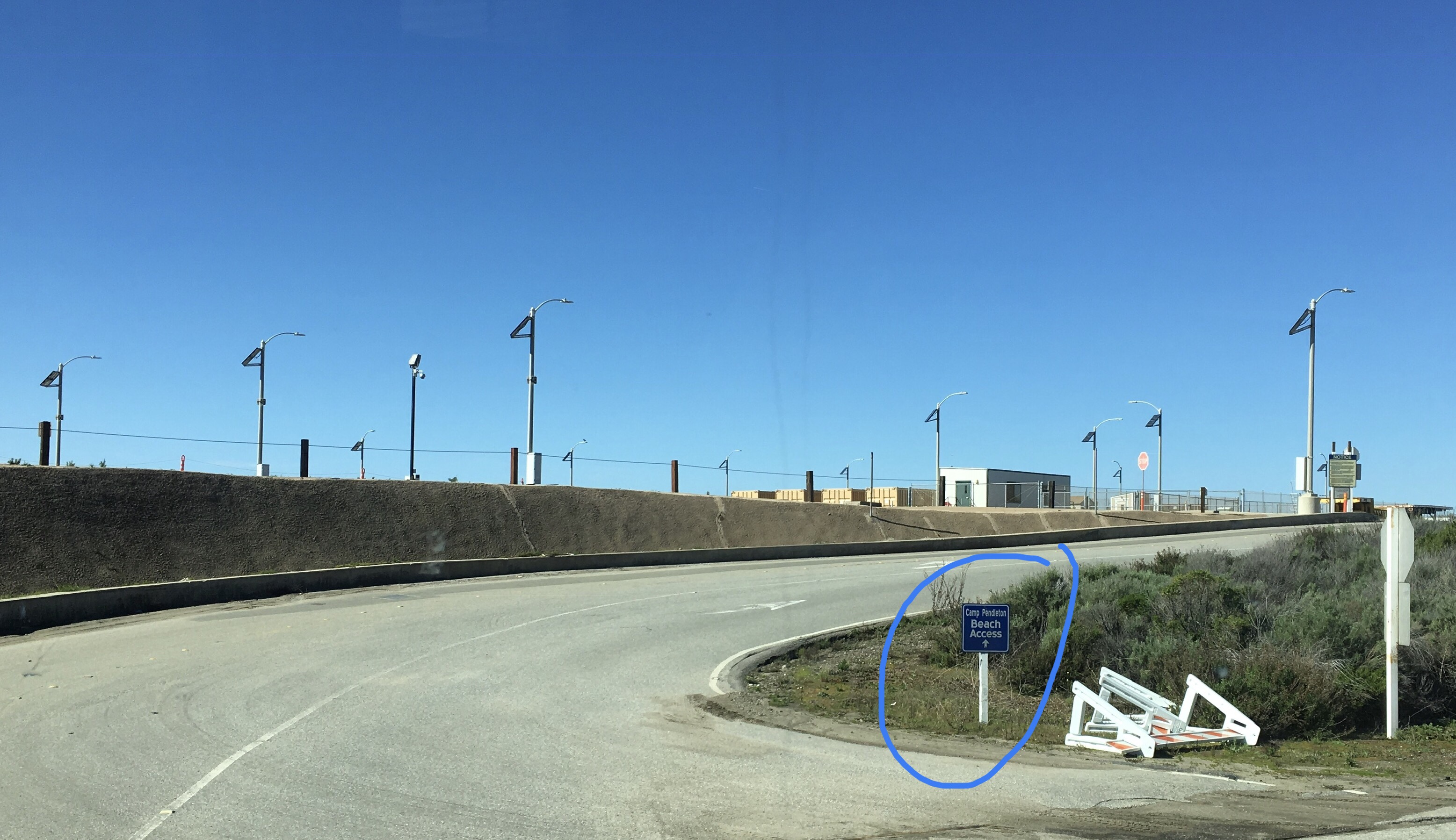 Camp Pendleton has two RV parks directly on the beach, San Onofre in the North and Del Mar to the South. Dutifully following the numerous tiny blue signs for Camp Pendleton Beach Access off of I-5, in and around overpasses, underpasses and back access roads we got to the gate only to find that we were in the wrong place. Leave it to the Marines to use deceptive tactics to keep the retired Navy away from their crown jewel park.

Snaking here and there, which included a stretch of backing up for a few hundred yards and a Betty Special (three point turn in a 35 foot rig) we eventually located the park at the end of an underpass of the I-5. This surfer/RV park was built right on the coast just steps from the waterline.

Dozens of marines bobbed on their boards waiting to catch the perfect curl on their lunch break. The campgrounds looked abandoned except for the surfers, but we pressed on confident in our new ability to back all the way out should we have to. 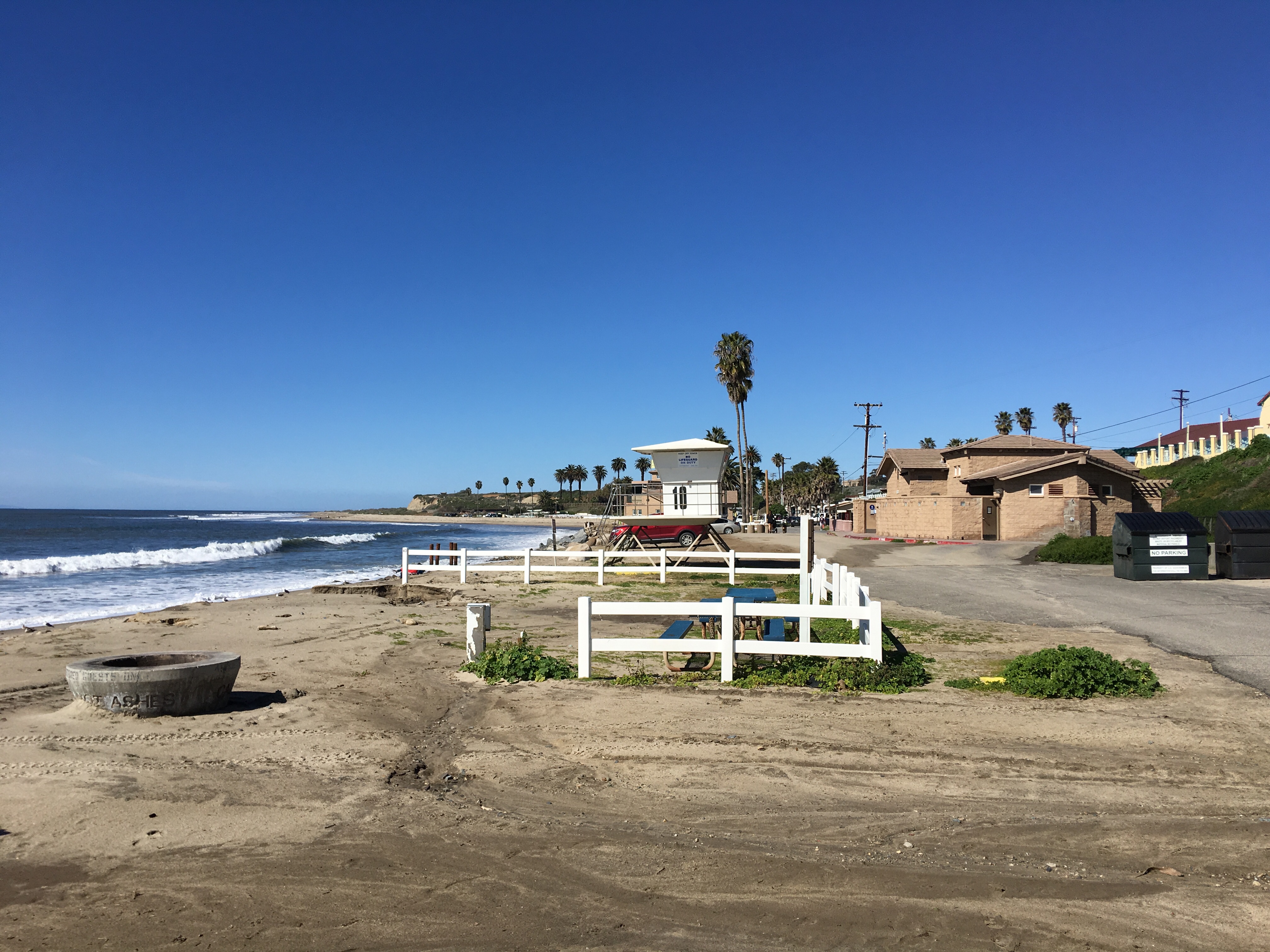 Rounding a bend, we located the few campers. These were the people who wanted to disappear from civilization. The camp office was housed in what we guessed was Teddy Roosevelt’s old hunting lodge. The friendly receptionist, thrilled to see someone, explained that sometimes the place has to be evacuated when the surf threatens to take everything to sea. But, now it was fine and they had space. Would we like to stay?

This legendary surfers RV camp on the last untouched coast in southern Cali is wild and beautiful. The creepy abandoned cabins with the birds used in the Hitchcock movie camping on the roof added to the mystery. The camp wasn’t the right choice for this trip, but we took notes for a future adevnture. 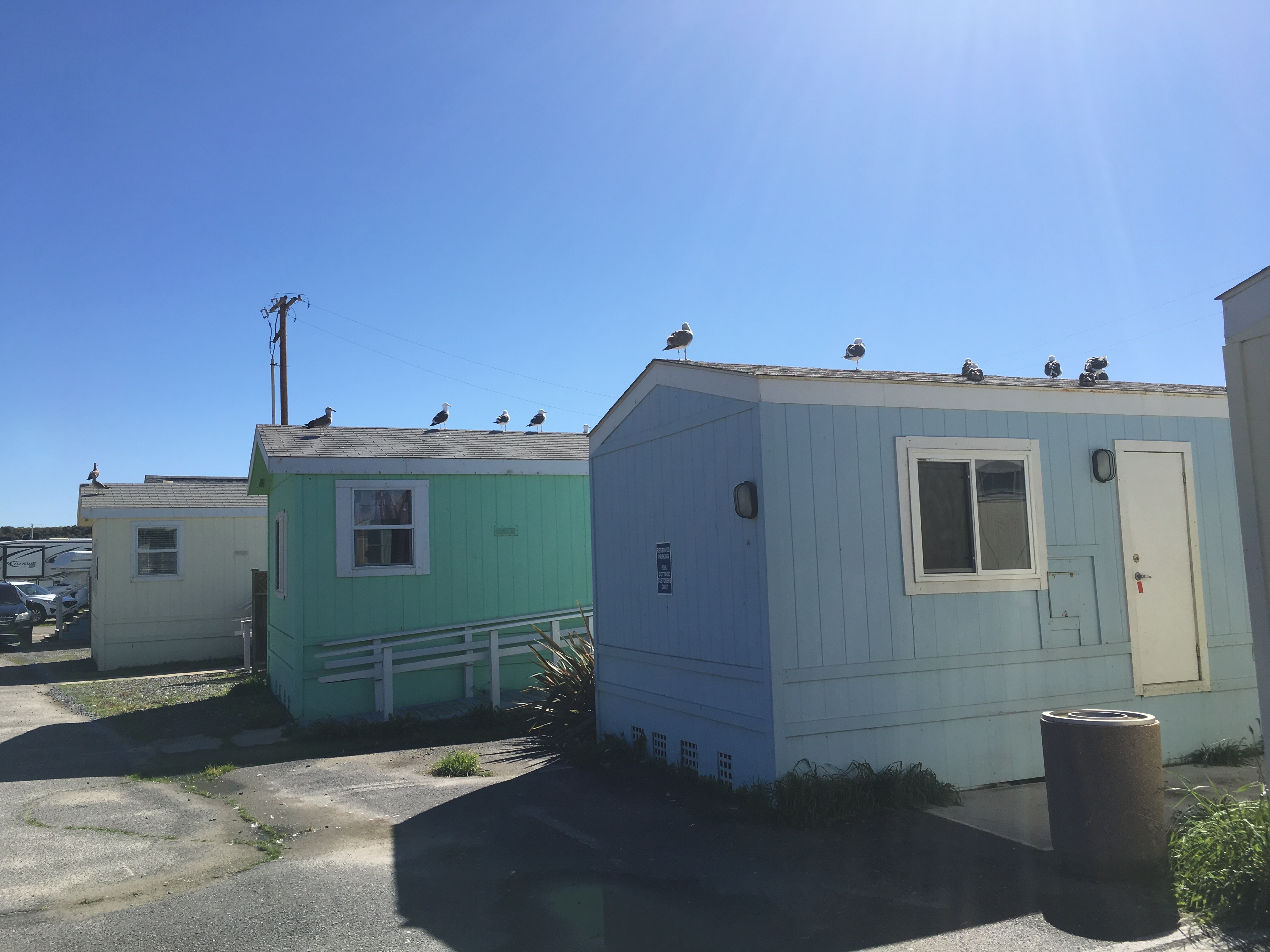 From Surf Camp, we rolled into the interior of Camp Pendleton. The stunning natural landscape was home to the Marine Infantry School and we could see the students in the distance hiking to outdoor class, their tools on display. Larger than most National Parks, the base has preserved what California must have looked like to the earliest settlers. We stared in wonder and drove all the cars behind us crazy as we slowly traversed the base from north to south on its single main road.

Back on the I-5, 30 miles south is the Del Mar RV park adjacent to the motor compound and marina. Marines fired up landing craft and troop transports as we passed. The parking-lot-style campground sat directly on a wide beach. The break was no longer the perfect rollers of Onofre but peaceful lapping where families could dig in the sand, play volleyball and roast marshmallows. Bath houses, picnic facilities, beach chairs and fire pits surrounded the camp. The place was not full and we could have grabbed a sandy spot with the Pacific out our front window, but we had San Diego on our mind. 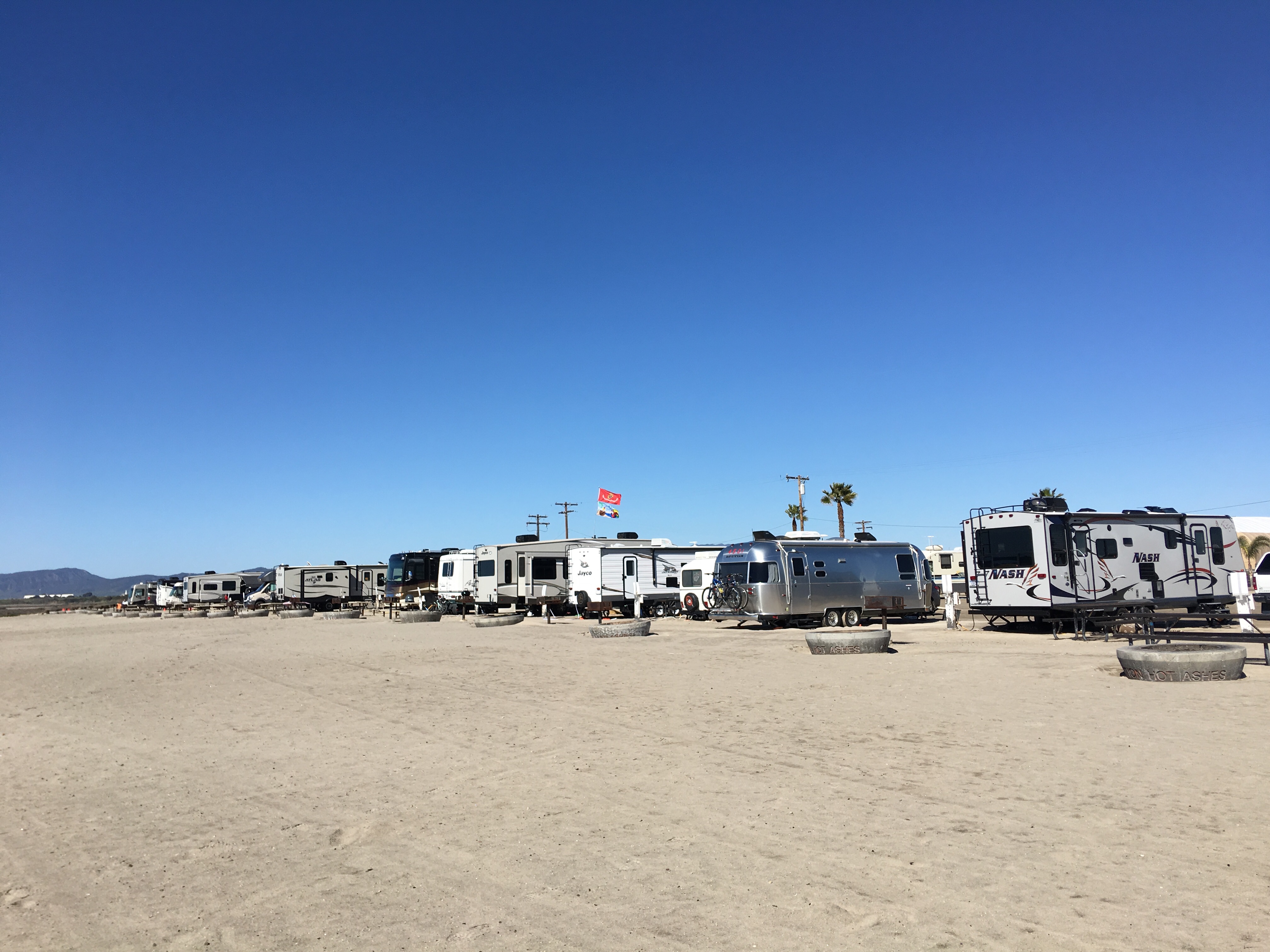 Crossing over the Coronado bridge is a death defying ordeal. The narrow lanes have no shoulder and a single concrete “Jersey wall” is all that separates you from a 300 feet fall into the San Deigo Bay below. There’s a lot going on under the bridge but Eric stared intently on the white line between the lanes – never looking left or right.

After what seemed a lifetime of being suspended precariously above the bay, we made landfall on Coronado Island, welcomed by the blue water and familiar city scape out our front window. There’s no place like Cove.