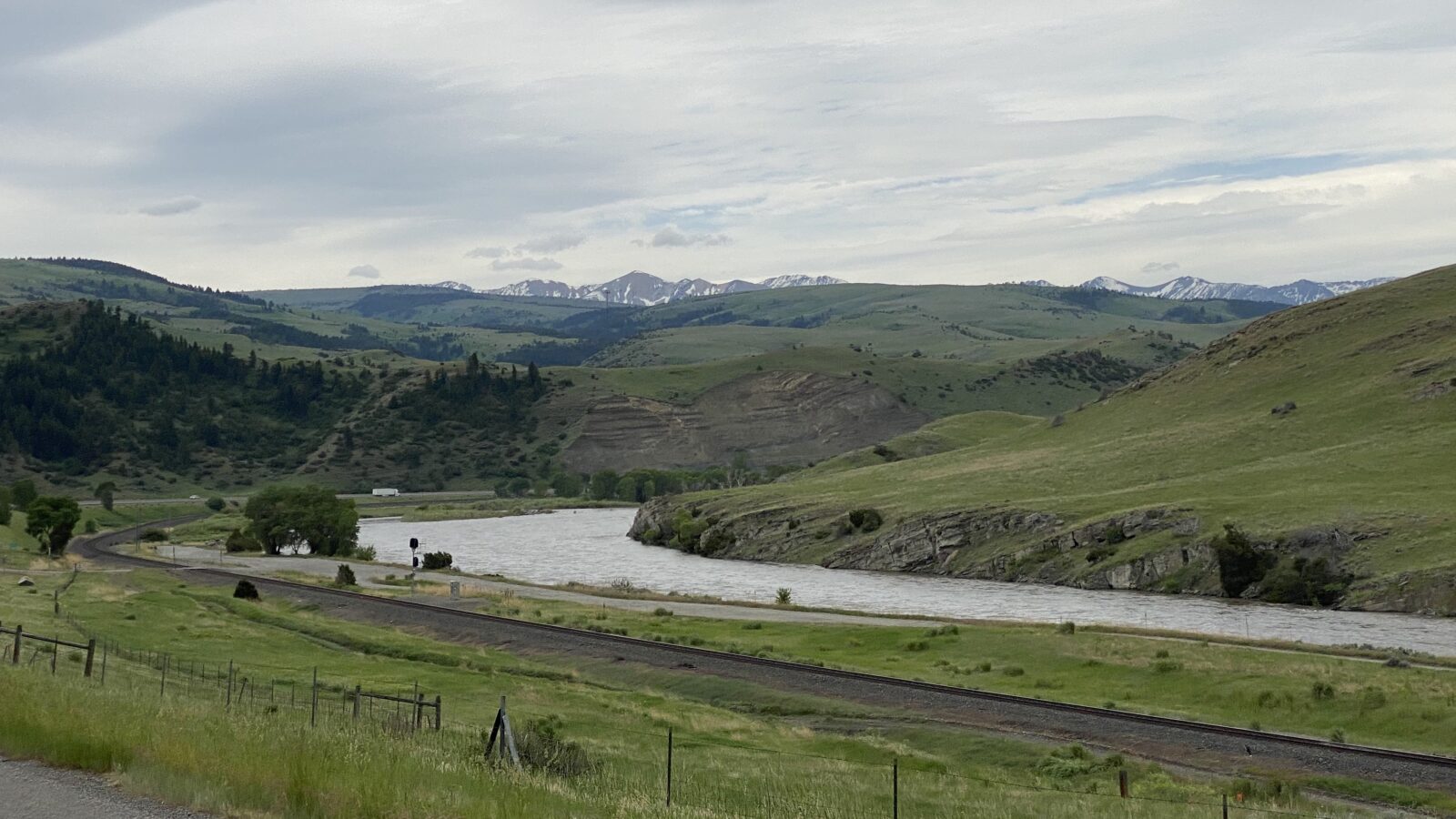 It’s been 24 hours of heavy rain here in Bigfork, Montana. They call it a Derecho – a big ass storm that’s long, wide and traveling. News reports say it may be the first in history to cross the continental divide. Of course it is. It’s 2020.

Camping in a walk-up spot at the Wayfarers Unit of Flathead Lake, it took two overnights and 880 miles through the Rockies to get here but now we’re settled. Fourteen days of wayfaring ahead.

There’s a lot of construction on Montana roads, especially around population centers like Miles City, Billings and Bozeman. Roxie’s not fond of bumps in her trunk. Thank goodness we have a lifetime supply of Koozies by Katie and stylish storage bins to keep glass containers from breaking and supplies from shifting.

In-between are miles of pasture, rolling hills, mountains and the occasional outcropping of Badlands-style rock formations. The rest stops have picturesque overlooks and individual bathrooms for foolproof social distancing. It is such a contrast to Maryland House’s three dozen stalls at the I-95 rest area back home. Folks out west, and we don’t mean California west, like a lot of empty space around them, even at their rest stops.

Pompey’s Pillar National Monument lies between Miles City and Billings, marking a point on Lewis and Clark’s Yellowstone River Valley exploration where Clark signed his name in sandstone, thus “discovering” the land. Ask the Native Americans about that. Since none of the dozen interpretive displays addressed the seemingly unrelated name, we asked the Ranger some tough questions and he revealed it was named after the infant child of Clark’s Indian guide, Sacagawea. We also asked him about the history of a single mom with an infant leading fifty-some men across Montana and the Dakotas, but he preferred to focus on Clark.

Billings is a working town. It reminded us of west Texas oil towns like Midland and Odessa. Lots of factories, energy, drilling. We stopped at Walmart to provision and a guy in the spices aisle was packing a 9mm gloc on his right hip while pushing his toddler in a cart. It was a no-bullshit feeling there. We provisioned Roxie – no bullshit style.

Not wanting to go private in Billings, we left Walmart to check the Cabela’s and Cracker Barrel for a parking lot overnight. The price is always right in a parking lot, but it’s not going to wow you with ambience and after that Walmart run, we agreed to move on. Forty miles west on I-94, the small town of Columbus was listed as having a free first-come first-served city park. Even though camp might be full or Roxie too big, we left the mediocre sure thing behind and headed for Columbus late in the day, fingers crossed.

Wouldn’t you know it, there were only two spots left at Itch-Kep-Pe park, right on the banks of the raging Yellowstone river. Technically they were too small for Roxie, but the true limit to how big a rig you can fit in a spot is whatever the driver can make work. If your rig does not extend past the boundary of your site, especially the part that adjoins the road, you fit. We fit, evidenced by the thumbs up from the watching-our-every-move Camp Host.

Itch-kep-pe has a terrific mellow vibe with folks just doing their own thing in whatever they can bring, whether it be a Class A, panel van or 1970 Buick. We did our own thing with a Thai Panang Curry dinner on a quiet night where the loudest noise was a distant train and the sound of the swollen river. Once again, rolling the dice paid off.

880 miles proves Montana is cattle country. While the modern cowboy drives an ATV and wears basketball shorts, the steer have largely stayed the same.

20 miles south of Missoula, home to U of MT, is Stevensville, home to Harvest Host member, Wildwood Brewing. Calling from the bar at The Little Missouri Saloon in South Dakota, the proprietor was iffy on letting us overnight considering our nomadic ways and the pandemic. Eric had to go to the, “you can trust me, the government did for 30 years” in order to close the deal. Surprisingly it worked. All hope in our government is not lost after all. Five delicious beers on tap, wifi and brick oven pizza made for a relaxing night on the converted barn property.

When Glacier National Park locked down, they promptly cancelled our 10 month out reservations. When we made the decision at Barksdale to head in that direction anyway, we flexed to the Montana State Park system as an alternative. While the Feds own the massive chunk of land at Glacier, the state owns some choice property around the picture-perfect Flathead Lake about 40 miles south. With Boss, we figure that was close enough, so we locked down reservations at three different campgrounds – West Shores, Wayfarers and Finley Point, at different points on the lake.

The reservation system, like all campsite reservation systems, is tough to use. If you are lucky, you get one small picture of the site with some general guidance on what size rig it will accommodate. We put reservations in place basically because reservations bring peace of mind, but are rarely your best option. With practiced timing, we arrived early-ish on a Sunday (weekend checkout) and reconnoitered all the state parks around the big lake. Finding an open first-come first-served at Wayfarers with a peek-a-boo lake view and bikable access to the super cute lake town of Bigfork, we secured the full two weeks of our intended stay. The site has no electricity or water, but after our boondocking experience these past ten days, we’ve let go of the tether; easy when the campground has a sparkling clean bathhouse complete with dish washing station.

After 2 years and 30,000 miles of blogging around the country, we’ve learned that we prefer not to reserve. We like to research our options then go there and see what we find. Landing an online reservation can be a frustrating experience that often has to begin up to a year prior to when you want to visit. As we gained experience camping in a wide variety of venues, we gained the confidence to live with the uncertainty and trust in our scrambling skills. No risk – no reward.