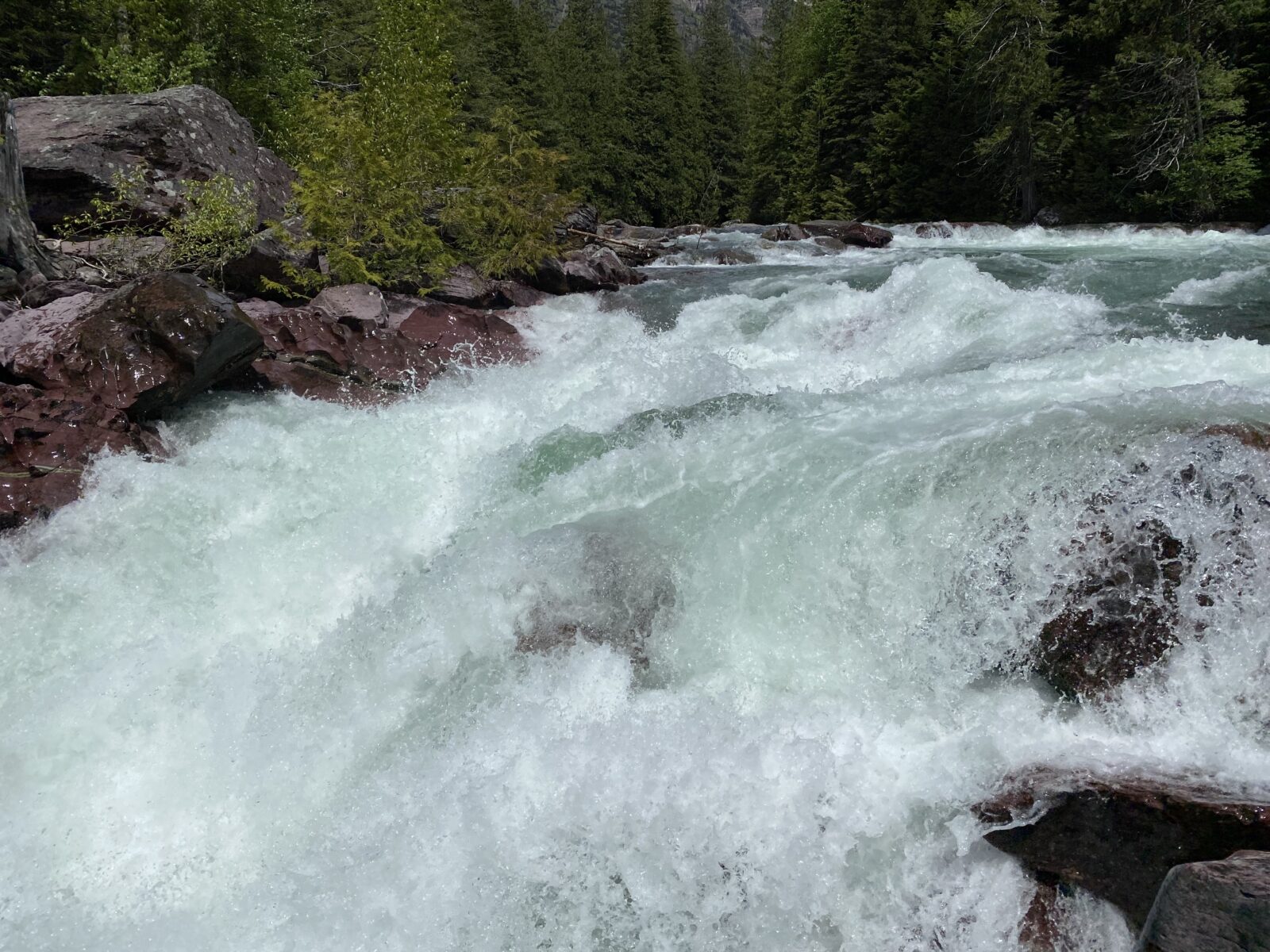 Glacier National Park is in Phase 1 re-opening and while we can’t get to a glacier or the East Side of the park, or most of the West Side or camp in any campgrounds or explore the visitor centers, we’re surprisingly okay with that.

It’s like the Royal Taj Indian buffet in Columbia, MD. Sheri gorges on variety while Eric overdoses on Tikka Masala and Naan. Our eyes are often bigger than our stomachs, so we eat too much too fast, leaving stuffed but not wholly satisfied. Sometimes a bite is better than the whole enchilada, or in this case the whole makhani. The Phase 1 Glacier buffet has only brought out a few items, but they are choice and the restaurant is empty.

Glacier has opened 9 miles of driving Going to the Sun Road between the visitor center and Lake McDonald, the mountain lake that could give any lake in the Swiss Alps a run for its money in a best photo contest. This stop serves as the destination for all vehicular traffic. Its modest parking lot fills by 10 a.m. Another 10 miles past that is open to foot and bike. In humorous park ranger fashion, the Going to the Sun road has actually been temporarily converted from a road to a trail – with signs referencing the appropriate park regulation in case you were litigious. For us, that was perfect. The limited opening gave us everything our bodies would give us, 20 miles of biking, 6 miles of hiking and 7 hours of gawking as we slide back into active life.

Entrance fees are waived and Rangers wearing masks are stand by to help make the most of limited access near Lake McDonald. They’re as frustrated as us outdoors-people are but they have to strike a balance between sharing their park with millions and containing a highly contagious disease. They remind us that it is not often that this road is not a line of cars. Entering the park, you can shop and eat in Apgar Village, as well as rent bikes, kayaks, SUPs, fishing gear and bear pepper spray. You can drive 9 miles to Lake McDonald Lodge with scenic turnouts along the way. Beyond that, it is a temporary biker’s paradise.

As of Thursday (June 11) we were allowed to bike past Avalanche Falls to the Logan Creek Bridge, 10 miles out and only 10 miles short of Logan Pass which is another 2+ hours in ride time due to 6% elevation climb. We hear that’s opening on Monday (June 15) – fingers crossed. A late summer snow storm and a few rockslides are in the process of being cleared.

One side of the road is gushing untamed river whitewater mixed with steadying streams while the other is snow covered mountaintops and trees that touch the clouds. We scrambled down wooded cliffs to sit on a rock and feel the water spray our faces then flag down a passing ranger in his truck to watch him coax a black bear that we spotted off the road and into the woods.

The Trail of Cedars connects to the Avalanche Lake, which is an amazing hike in three acts.

In the setup, you enter a narrow canyon that drains an ancient glacier with trees so thick and tall you can’t see the sky. Your child eyes awaken and you’re doing Dance of the Sugar Plum Fairy, flitting from trail to waterfall, through fields of giant fern and towering moss-covered rock. But soon the music turns dark, you’re climbing out of the canyon and into Act 2 – confrontation.

Instead of flitting, you’re stretching, huffing and puffing if you’re us, dragging yourself up through a dark and gloomy cedar forest of deadfall. Shadows trick the eyes while branches snap and creak and wrestle deep within your eardrums. Now’s when you wish you had that bear pepper spray. But, there is no food in this dark part of the forest. Why would a bear hang out here? On this wayfare we’re alone, with the occasional stranger passing in downhill haste. What are they running from, we half-jokingly wonder.

Nearing the end of middle passage, we meet resolution in the form of two smiling hikers with a message of light just ahead. Deadwood clears, mountains appear and a stadium of 100 foot waterfalls fill a crystalline lake where a momma duck is protecting her ducklings from a predator while teaching them to fly. Just three miles off Going to the Sun Road, we’re in a different world. Looking along the stretch of lake shore, we count six of us taking in the vista. The low numbers are a result of the trailhead being nine miles past the last parking space for a car. We think of the park fully opening to the expected millions of visitors and are thankful for our timing.

After Avalanche we make our way back towards the lodge with an occasional roadside rock scramble to take in the white water features of the Flathead river. It is late afternoon and the park is closed to new entrants at this time of day. At this northern latitude and nearing the summer solstice, the sun will not set for another 6 hours. No cars, few people, we pedal in late-afternoon sunny silence awed by the snow capped mountains surrounding us. What more could we say?