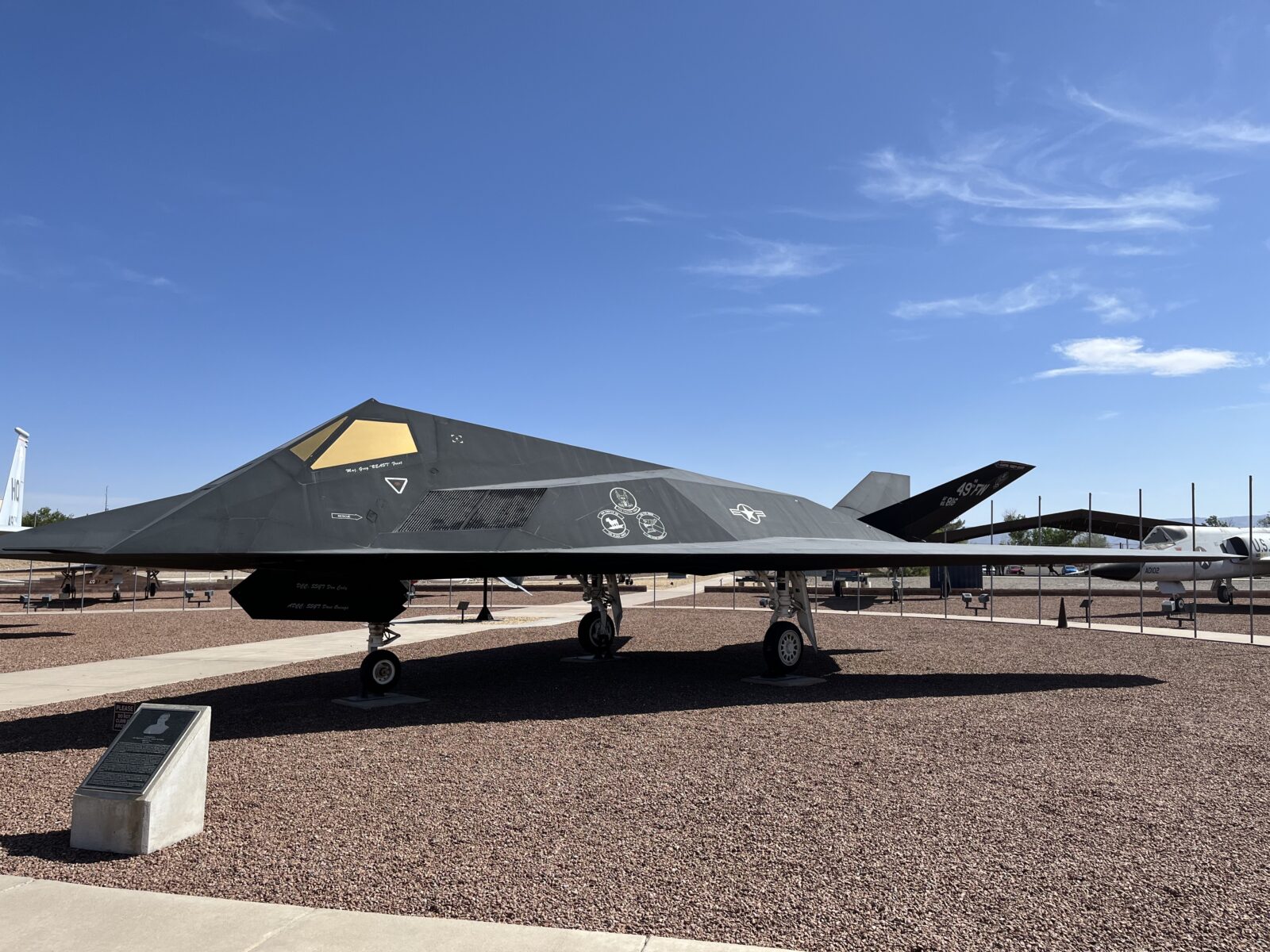 In the eight days we’ve been hanging out in Alamogordo, NM, we’ve been more active in this town than we’d been in the past 8 months in our Florida hometown. Why is that? Does the house have to be less than 200 square feet to force us out and about?

We drove a freshly washed, waxed, and oil changed Boss to the Tularosa Basin Museum of History. After a month on and off the pavement, the truck was dirtier and dustier than a cowboy who just got done rustling steer. Can we write sh** like that now that we have a cowboy hat and boots? Military bases have DIY garages where you bring your own supplies, put your truck on a lift, use their tools and fix what needs fixing. Eric had seen these auto shops on bases for decades but never thought he’d get to use one. Never say never because today he got to play bad-ass mechanic with his own lift!

At the museum, two volunteers took us on a tour of Alamogordo from prehistoric peoples through Trinity and today. Tularosa basin has the oldest documented footprint of humankind in North America and is the site of the first nuclear bomb explosion, technology that can take out all of humankind. Progress? Your call. Established as a railroading community in the 1890s, the town drew adventurers, outlaws, entrepreneurs and tourists. When rail got killed by roads, Alamogordo revitalized as a military support zone. There is a lot of history all around us and the locals are rightly proud of it.

Walking around the town you see evidence from when the Natives held the land, when Mexicans ruled and when the white people moved in. The area has been in constant turmoil and all that history is still here, preserved in the geology of the basin. To drive through it might look like a desert with billboards and aging buildings, but it has a history that is as rich as any city in the United States. We never used to think of New Mexico that way, but we are coming around.

Alamogordo is hanging onto its small town vibe with national brand access. Just beyond the city limits is the Aviator 10 theater where Tuesday is any movie, all day, only $5. Not remembering the last time we saw a movie in a theater, or ate fake buttered popcorn out of a striped bag, we filled up our thermoses with Diet Coke, stuck them in Sheri’s purse and went for the double header. Don’t judge.

The Unbearable Weight of Massive Talent and The Northman are wildly different. The first, a narcissistic comedy, the second a revenge drama, but both a welcome return to entertainment pre-Covid. If video killed the radio star, then streaming should have murdered the theater. Any movie, all day, $5, 10, 20 a month? Why is it that we feel so unsatisfied after a Netflix binge and so “let’s go get ice cream and talk about it” after an in-the-dark, big screen, Dolby sound experience?

Except it turns out that Alamogordo has only one Ice Cream shop and you need a PhD in custard dessert creations to place an order. After staring at the menu board for 15 minutes we asked for a chocolate-vanilla twist in a sugar cone. Nope. They don’t do that. We had to bail on ice cream. That’s OK, we doubled down on the Hi D Ho for a burger and fries. That we knew how to order.