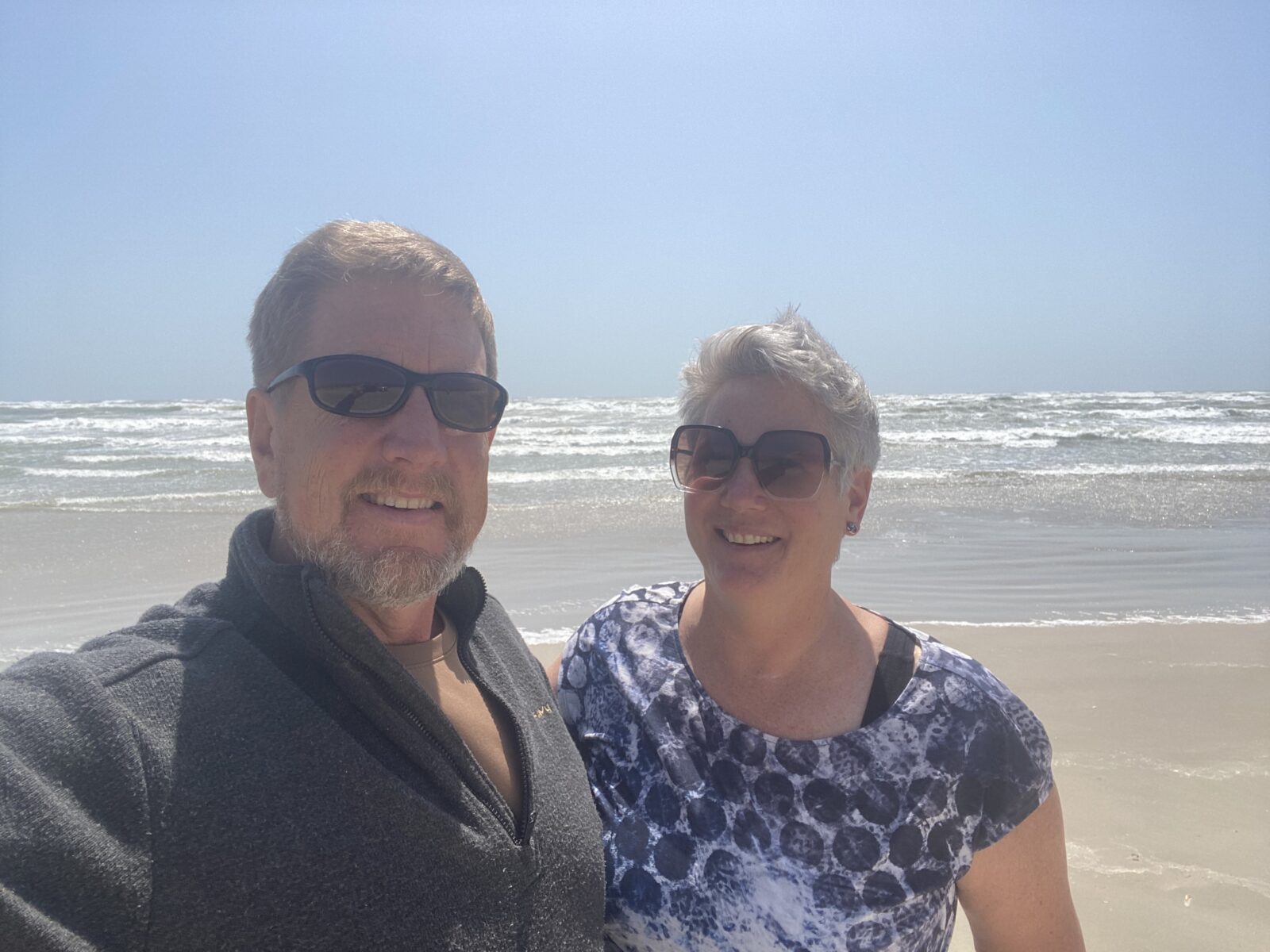 Corpus Christi’s tourism slogan is Sparkling City by the Sea. If that is true and the city is indeed sparkling, it might be because it has been sand blasted clean. After spending 4 days in constant high wind, we propose changing the name to Whipping Wind City that makes you want to Throw Yourself into the Sea.

There’s been no escaping the gale force winds here. Roxie won’t stop shaking. After a day where the sand on Mustang Island stung us in the face and the force of trying to open Boss’s door was as strong as the threat of it crushing our legs, we retreated back to our tiny home where we pulled in the slides cause winds were gusting at 50 mph. It’s physically and mentally draining to live in a wind tunnel, even if it does have free laundry and Wi-Fi.

It’s 12 miles to Mustang Island State Park where the beach is considered a Texas Highway. We pulled onto the beach in our 4×4 truck. Right behind followed a Chrysler Sebring, not exactly the off-road vehicle of choice. He made it to the soft sand entrance where he bogged down and blocked a long string of vehicles also attempting to cruise the beach. The sign said “4-wheel drive recommended.” Hey that means “not required,” right?

You can drive the beach for many many miles, unless you get stopped by a fishing jetty, get stuck in the sand, or get stuck in the sand while trying to cross a fishing jetty, which is not only expensive but a really stupid idea to begin with. To his credit, there were no signs stating the “crossing the massive rock jetty is not recommended in any vehicle smaller than a monster truck.” Try as we might, we were no help in freeing the young man from his predicament. After we got stuck trying to help, and then thankfully unstuck, he shooed us away and started digging. In Texas, you learn to dig yourself out of your own problems we guess.

April is not be the best month for beaching in Whipping Wind City so we drove into the beach town of Port Aransas. The real estate market is booming here with the median home price at $650,000, up 50% in the past year with new stick homes being built in golf cart communities with street names like 7 Day Weekend Drive. Texas is a boom or bust. Right now, it’s all boom until the hurricane comes through then its all Kaboom! We stopped to tour the model at Cinnamon Shore, starting in the mid-millions, but when the toothy golf cart tour guide came barreling toward us, we bailed.

The town is crowded, like most tourist towns are, but the gridiron plan in Port A is woefully bad. The last 500 yards to get to Port A from Corpus are by way of a very short ferry ride or join the 20+ mile detour like we took. There are ferry, park, beach, retail and housing systems that all collide in one intersection, making passage through any of them a tied up mess. Basically, everyone except us and two other cars are waiting in one of the four or more lines to the ferry. The people trying to buy hermit crabs at the Jaws store can’t get there cause cars are blocking the entrance waiting in line for the ferry crossing. And if you happened to make a wrong turn into the park and marina, use the public restroom, cause it’s a 30 minute queue to exit because, you got it, the cars exiting the park are actually another line for the ferry. If only there were some amazing invention to replace the ferry.

We tried to eat our lunch down by the water, but it’s $12 for a beach permit to park anywhere in the vicinity of the beach. If you bury your wheels in the sand we are not sure if that counts as parking. A wrong turn gave us a show of tugboats in the channel, but the seagulls are so aggressive they tried to snag our food through the windshield of the car. The struggle is real in Port A.

Still, crowds of vacationers are out in their golf carts heading to the beach to wrestle their beach chair open in the hurricane force winds. Some even ventured forth into the angry chop with their boogey boards in tow, and some of them even made it out.

The wind knocked the wind out of our sails. We fought our way out of town, only to be stopped dead again in a 40 minute queue to cross the causeway for home. Thank goodness for YouTube and SNL skits. Every coastal area has its proverbial beach town and this certainly was another one. T-shirt shops, henna tattoos, and golf cart rentals round out the variety of shops. What set this beach town apart were the insane conditions. We are sure a new bridge must be in the planning, and hopefully a large off-shore wind break. But, until then, the stop and smell the blooming cactuses idea is stale. We’re ready to fly away, bye bye!