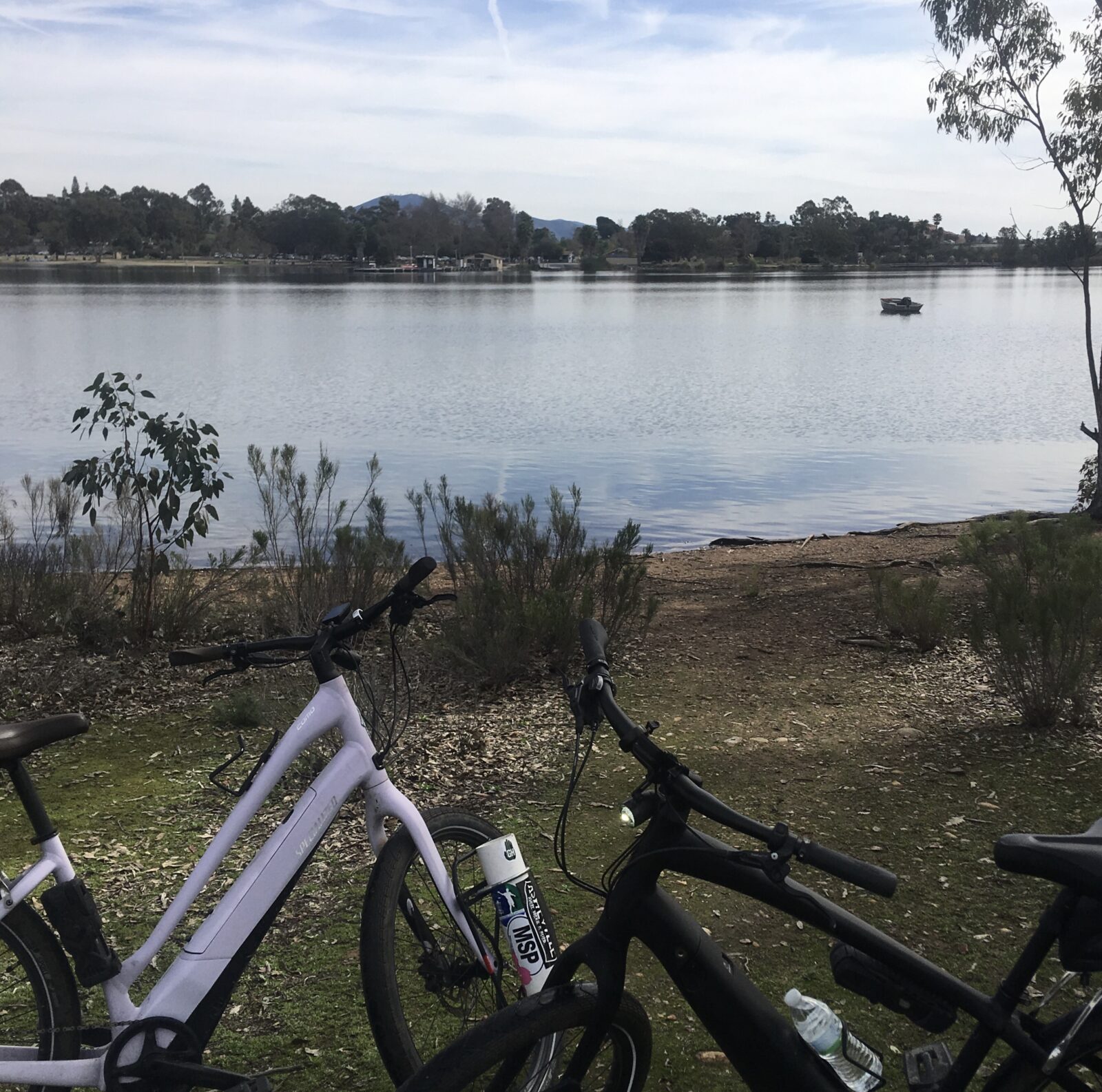 With seven days left at Admiral Baker and the likelihood that we will not soon return to the Mission Gorge neighborhood, we’ve decided to slay the east side, starting with a 4.3 mile hike to the 1,593 foot highest point in San Diego, with views from Mexico to Orange County.

Eric mapped this entirely uphill route to tour east side neighborhoods and approach Cowles Peak from the backside service entrance. Riding up Navajo Road, Cowles Mountain looked down on us as we navigated the long circle to the southside.  The Como’s are e-bikes that draw current from the Lithium-Ion battery integrated into the down tube that powers a 250 W motor integrated into the pedal crank.  The effect is a natural feel for the rider.  You move up the rear chain ring on the grades and use the electric assist to augment speed.  It is a totally different feel than the rear drum motors we used in 2013 where the e-bike felt decidely like an electric scooter with a throttle.  A bicycle purist likely calls it cheating as some (most) glare at us on the long up-grades as we pass.  Of course, we are pedaling in hiking boots, carrying a picnic lunch on the way out and kitchen provisions (gallons of water) on the way back, and moving between highway, sidewalk, gravel and grass as required.

Before the hike we took a spin around Lake Murray Reservoir. It’s like most of the city reservoir-lakes you’ve been to … paved path for biking, jogging, dog walking and stroller pushing, plus boats for rent and a stocked lake of large mouth bass, white perch and black crappie. It’s the perfect urban escape where kids, abuelos, and singles jog and bike along the wide path – in January.  A quick check of the weather app on my phone shows 29 F and freezing rain in DC.  I’m betting Rock Creek park is empty.

At the Cowles trailhead you have a choice to take the brown dirt straight up service road or the Barker’s Way trail that disappeared into thick brush. We took the obvious route that we could see and spent the next 45 minutes with our calves stretched and feet slipping on the loose surface.

The views are good at 500 feet and spectacular at 1500 feet. The coast was clearly visible to the west, and the 10,000+ snow capped peaks of the Rockies to the east.  After capturing pictures from every angle, we found a comfy rock and snacked on honey crisp apples with almond butter. We were able to point out all the places we’d been and in the far off distance, the place we will go next. As hard as the hike was for us, we were not alone. Elders, toddlers, fit and fat – it is a hike that anyone could do, if you have the will and the time. It’s a howl of an accomplishment! AH OOOOO!

On the way down we took Barker’s Way which turned out to be the more interesting route. Like a reverse Stairway to Heaven, this trail had switchbacks, stairs and giant stones.  It is longer but less steep with better footing.

We’re on our way to completing the 5 peak challenge. Sheri wants the certificate and pin. Eric claims to be a One Peak Wonder.  Time will tell.