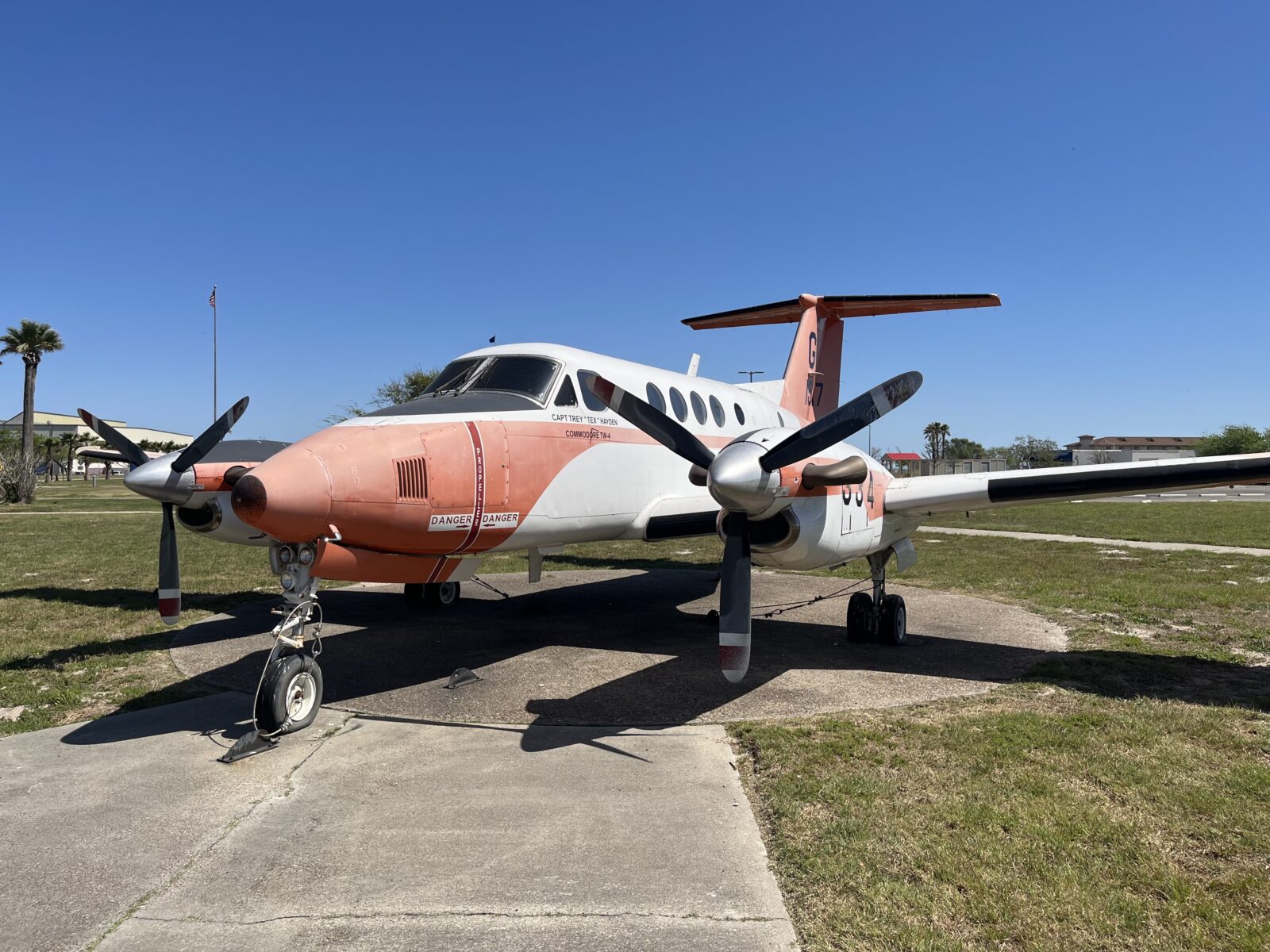 Once you set an itinerary, book reservations and start moving, it’s hard to mentally deviate from the plan. In the one week we’ve been gone we pressed 1500 miles west, pulling 10,000 pounds through half a dozen under-construction beltways, plus Final Four mania, 10 pounds of fried food and sport fishing in gale force winds. We were due to leave Corpus today for a 300 mile ride to Amistad National Recreation Area then a 200 more miles Palm Sunday arrival at the North entrance to Big Bend National Park to drop jacks and head out into the desert for tent camping at the end of a 10 mile no joke 4WD trail. When we said it during planning it sounded let’s go for it right. When we said it yesterday it sounded WTF nuts.

For 81 years, young men and women in flight suits have been sent to south Texas to earn their wings of gold. Four squadrons comprise Training Wing 4, one of five training wings in the Navy that produce all of the Navy pilots each year. The TRAWING 4 Facebook page is full of bright faced youth proudly receiving awards for jobs well done. All that youth and vigor must be hidden in office space behind controlled access points cause it’s nowhere in sight near the gusty Corpus Christi RV Park.

The windswept station is surrounded by water on three sides. Trees grow at an angle. The RV park sits at the end of point of land fronted by the Corpus Christi bay where the wind blows so hard you feel like you’re Dorothy in a cyclone and the RV is about to whirl away to OZ.

Faded signs direct you to an abandoned building which used to house the RV park office. A tattered piece of notebook paper taped to the dirty window directs you to the office’s new temporary location, BLDG 332. If you spent some time memorizing building numbers and locations prior to your arrival like you should have, you will immediately recognize that the office is located in the old Catholic Chapel next to the Medical Center. In the chapel, Gus will check you in and assign you a pull-through spot which means you pull your rig through a dry field to the general vicinity of the utility hook up.

If this sounds terrible, you have not slid into the relaxed and easy lifestyle of RV’ing on NAS Corpus Christi. Don’t let the weather beaten ramshackle base fool you. It is all here, and at a great price. Sure the roads are ragged and crumbling and many of the buildings condemned, but your RV spot includes 50 amp service, water, sewer, wifi, free laundry, clean bath houses and a little office space at grandma’s donated dining room table. It will run you an Andrew Jackson per day to get rattled about like dice in a Yahtzee cup.

The base avoided closure by hosting an Army department and Homeland Security squadron of P-3 aircraft. Maybe the infrastructure on the base will rise up like a phoenix from the ashes and the base will shine like when it opened in 1941. If that happens, it is going to take a lot of work, except for the two dog parks, basketball and tennis courts, which have been freshly resurfaced, lighted and in the time we’ve been here, unused.

When we first pulled on to the base we were ready to move on. After our WTF are we doing moment, we decided to slow down. With the Laguna Madre in our backyard and a warm but not too warm wind allowing us to keep the windows open and AC off, we started wondering what was our hurry to leave. Maybe we could detox from the cracklin. Read a book, make some lentil soup, drink a cup of roobios tea. Catch up on Wordle.

Third in line at the altar in Bldg 332, fellow campers had the same idea and begged Gus to let them extend. They had reservations through Saturday, could they stay two more days? As Gus tried to explain they had reservations LEAVING Saturday, they were completely confused. Denial: Who would ever leave on Saturday? Anger: We absolutely paid for Saturday. Bargaining: We’ll move – we’ll take any site you have. Depression: What do you mean you’re overbooked? Acceptance: See Anger. The RV Gods were smiling down on us. We extended for two days without an issue.

If there’s no freshly caught trout in the fridge, hopefully Panda Express is your first choice for eating out. The other clubs remain COVID-closed and in disrepair. A modest NEX and Commissary provide an easy way to provision for an upcoming trip. Eric visited the Barber, where $11 for a haircut seemed like the wrong price and gas at the MiniMart is the cheapest we’ve seen at $3.51 a gallon. You can buy a hour of bowling, shoes included, at the Lighthouse Lanes for $20. Or play a twilight round at the Gulf Winds Golf Course for $8.50. With Mustang Island and Padre Beach less than 5 miles away, there’s more than enough choices to keep us occupied for a few more days. Right now, we’re into the soup.

The RV park is at capacity. Once in a while a training command T-6 Texan II aircraft passes overhead presumably with some future Navy pilot at the stick. There’s a pancake potluck tomorrow at the Cantina and Jeanine is over at the ticket office ready with attraction brochures and discount military passes to the Aquarium.

Right now though we’re going to relax and embrace the view.