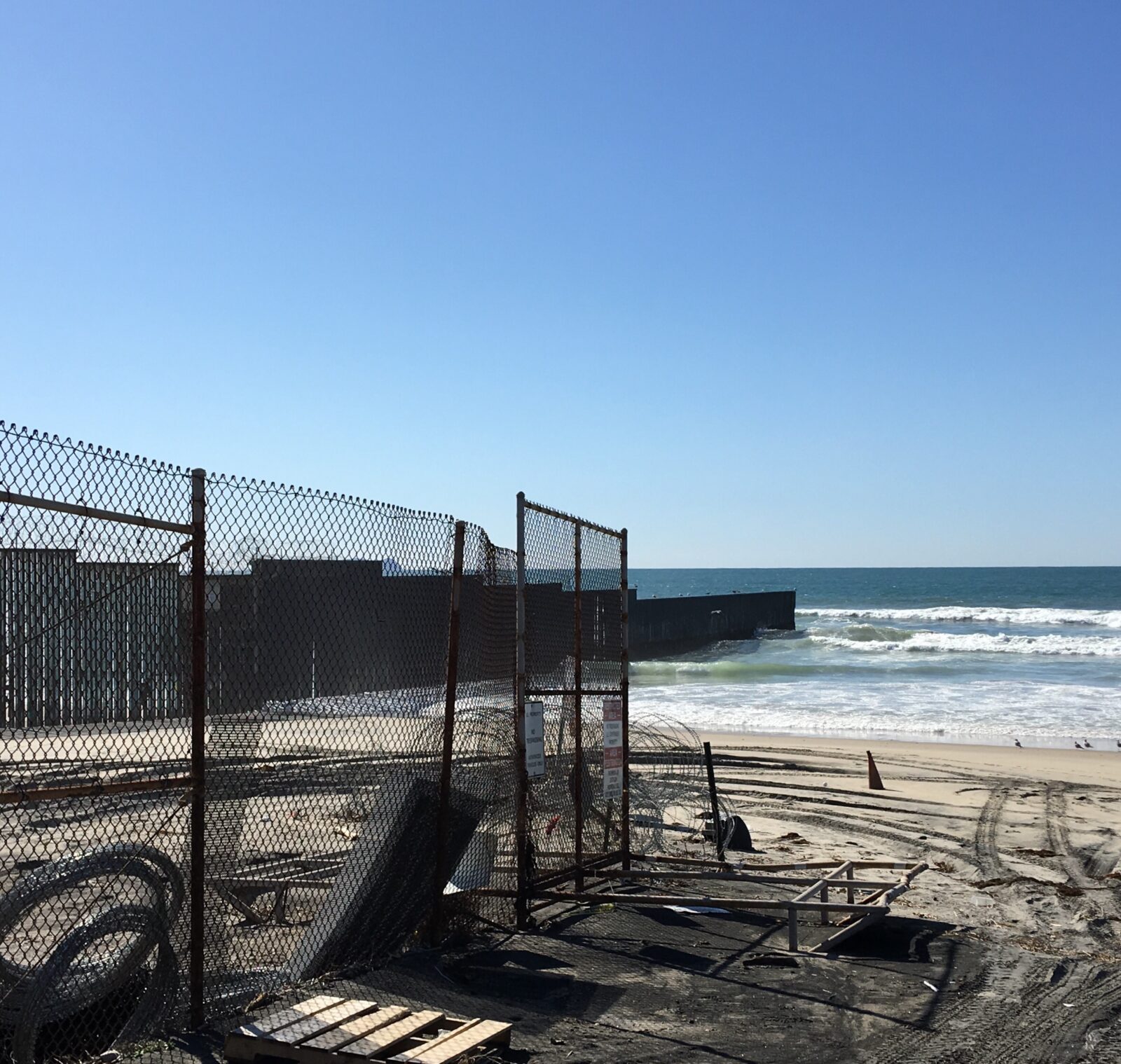 On the last full day in San Diego Eric mapped a route to visit Border Field State Park, the most southwestern corner of the United States, to get an up-close look at our controversial border wall.

We made the ride to Imperial Beach once before, along the Bayshore Bikeway, this time adding street lanes and off road trails connecting us to the Tijuana River Valley Regional Park by way of the Naval Outlying Landing Field and rural farms. What?

It’s always surprising when we’re booking down a high speed road, turn a corner and wham – there’s another Navy base.  That’s San Diego.  Everywhere you turn – Navy Base.  This one is where they practice landing helicopters. Imagine fencing in your largest Walmart parking lot and having multiple choppers run landing drills next to you as you return your cart. Eric watched the action while Sheri, uninterested in fascinating details of a helicopter auto-rotation, ducked into the Thrift Shop, bought a shirt and nutcracker then provolone cheese and freshly baked French bread in the commissary to go with the onion soup slow cooking back at Betty.

Back on the route to Tijuana, we left the beach and base behind for horse country. The roads changed from smooth pavement to broken asphalt, flooded passes and horse dung mud with the smell of fresh manure in the morning.

The versatility of the Como’s fat(ish) tires shone as we forged through closed, flooded and unpaved stretches of dirt road. It’s a weird scene in these parts. Border patrol agents in white pickups, SUVs and ATVs roam around while cameras track your moves. Even the horses are watching.

Reaching the top, we were immediately greeted by an armed Border Patrol Agent in a faded and beat up Ford Explorer asking us what we were doing there. “We came to see our wall,” we replied. He turned out to be a very nice man who talked to us about the steel slats, mesh wall and concertina wire.  He sounded very much like law enforcement, friendly and service minded, perplexed by the politicians, happy to chit chat with nosy citizens, always with eyes fixed on the wall.

Tijuana, or at least the fancy condo’s on the beach section, overlooks the flooded, littered plain of the Tijuana river basin on our side. A large highway runs on the Mexican side and hundreds of homes fill the hills. Mr. Agent pointed out where we could and could not go and described a route through the flooded valley to get to the beach next to the wall at water’s edge.  He recommended horses over bikes.

This was the location where the caravan approached in late December of 2018.  The agent was there when the unruly group climbed over the fence and were met by the Border Patrol.  As you can see, the second fence and wide access road make the job of defense easier.  The border agent told stories of teens running across the border in fence-less sections to throw rocks then ducking back into Mexico when agents arrived.  A pack of feral dogs could be seen roaming the area.  The agent assured us they were friendly and had just come by because he sometimes shares scraps of food from his lunch.

The heavy rains had flooded the Tijuana river leaving the roads to International Friendship Park closed and impassable. Since we couldn’t use the wide access road that runs along the wall (official use only) to get to the beach, we found one of many connecting horse paths and then took advantage of the hard sand and fat tires to complete the deserted journey back to the wall and the Park. Who needs 4 legs when you have two wheels?

The fence/wall which extends east as far as the eye can see, juts out into the surf to the west, ending in what we imagined was 6 or 8 feet of water. Along the fence, Tijuana teenagers push their arms through the slats to get our attention. We had to stop short of the wall, at the secondary fence, which had signs warning that the area between the fence and the wall was closed except on Saturday and Sunday from 10 until 2 pm, with ID and then only 20 people at a time. Like the Point Loma lighthouse this area is also a National Monument, Orwellianly or overly optimistically named (your choice) International Friendship Park.

After an International Friendship lunch of apples and cheese on a washed up log, we waved to the teens in Mexico, and made our way back north into the U.S. with a new perspective on whether fences make good neighbors.