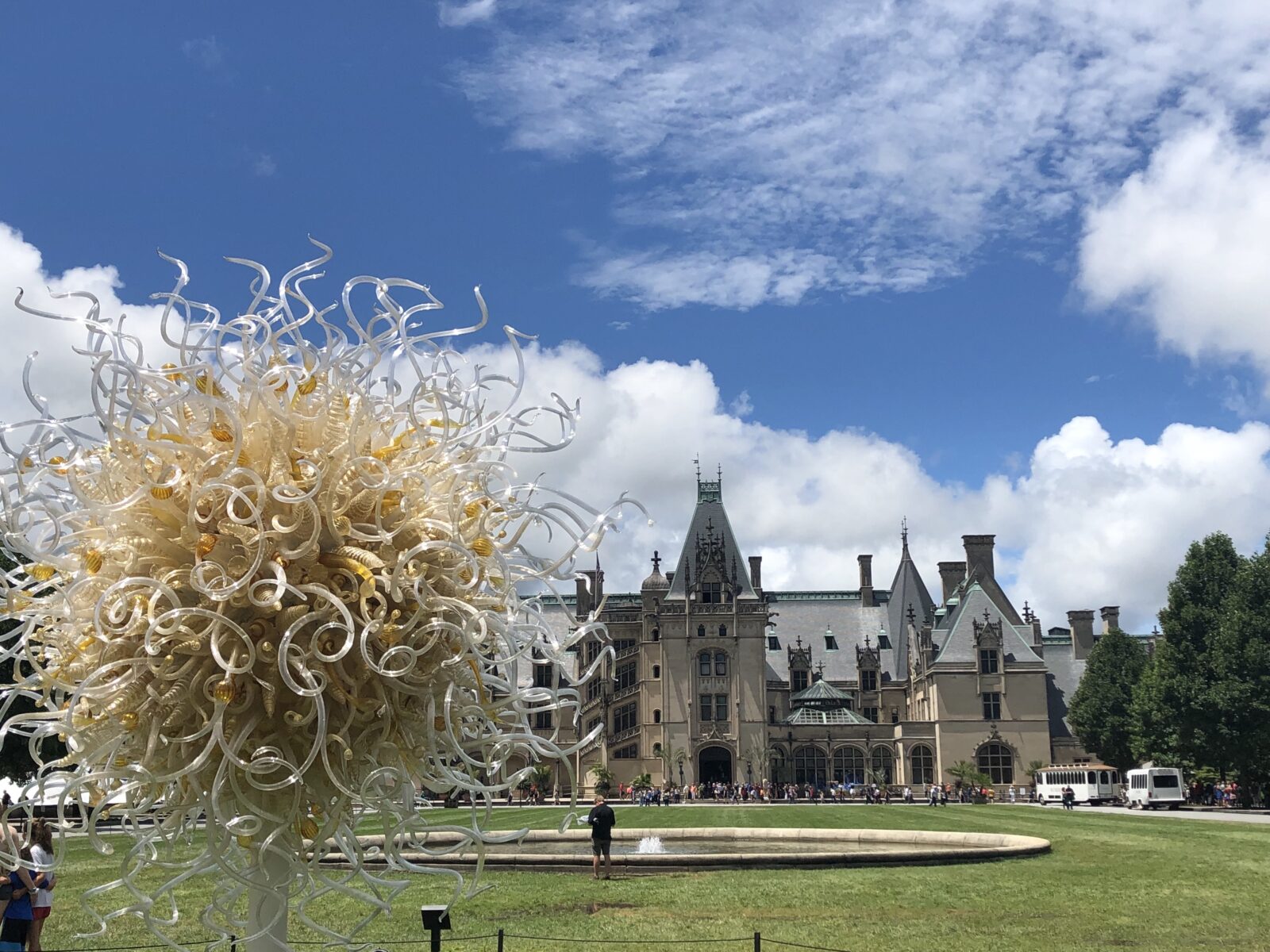 As usual, a downpour overnight and well into the morning foiled our plans to bike to the Biltmore. Declaring war on the rain, Eric read an informative review about RV parking there then packed up Betty for a 15 mile mini-excursion. The three days of rain meant that the site was largely packed or covered.  We disconnected three lines, pulled in the slides and jacks, and were on our way to Henry Vanderbilt’s masterpiece.

Originally a 125,000 acre estate, the Biltmore estate had been pared down to 8,000 acres which is still larger than the city of Asheville.  You need wheels to get around. The distance from the entrance gate to parking is about 3 miles of narrow, winding roads with security checkpoints along the way.  Helpful Biltmorites greeted us warmly and gave us riddles to solve on how to find RV parking.  For instance,  “at the Y intersection ahead, go straight and turn at the orange cone.”  What is straight at a Y?  There are dozens of orange cones.  We solved our puzzles and arrived in Lot C where we waited in line to board a shuttle to the mansion.This would be the start of the day-long conga line.

It’s currently Chihuly season and if you’ve been anywhere in America where there is a garden or casino, you’ve seen this exhibit before. We saw it in Phoenix, Seattle, Las Vegas, Central Park … It’s always lovely, and of course Sheri took pictures – she’s expanding her coffee table book for Christmas – Chihuly, Murals and Mushrooms.

The Biltmore is still owned by the descendents of Cornelius Vanderbilt.  Second generation George wasn’t the Vanderbilt that made the fortune.  He was the 25 year-old that inherited it from his father William Henry who died during the gilded age.  His sister, who also inherited a fortune, and his friends, who, you guessed it, inherited a fortune, had built their mansions in places like New York and Newport.  George needed something that would attract the right people out of the city and into the country – and the Biltmore was it.

The Biltmore is designed in the Beaux-Arts tradition, which made Eric feel right at home from his time at the Naval Academy, which is also a Beaux-Arts masterpiece.  Highlighting the country nature of his estate, George was sure to hang animal heads on nearly all of the walls.  That, combined with the dark woods, and carved faces in every corner gave the place a gothic, gloomy feel.  Even the festive tourist conga line that weaved its way in and out of room after room could not lift the spirit.  The fall of the house of Vanderbilt is a true story that was good reading on the iphone for the setting, although perhaps not what was intended by the tour guides.

In the gilded age, the people of means did a lot of sitting.  The Biltmore was prepared for that contingency with one enormous sitting room after another.  Bedrooms had expansive attached sitting rooms, banquet halls had adjoining sitting rooms, even sitting rooms had their own connected sitting room.  We noted that the most prized areas of our modern homes were the least emphasized in the gilded age.  The bedrooms and ensuite baths were largely small, dark, and dank.  The closets were non existent.  The kitchen, far from being the central piece in an open concept floor-plan, was in the basement; only suitable for servants.   The swimming pool and exercise room felt like they were located at the bottom of a mine shaft.

Cornelius Vanderbilt, who was once the richest man in America, would have been proud of his descendants who still own Biltmore through the Biltmore corporation.  Except for the conga line through the mansion portion, much of the Biltmore experience is an excercise in retailing.  One is lead to believe that Biltmore was famous for its signature mug collection,  genuine sterling silver pendant collection, fine Egyptian cotton hand towel collection, and numerous other skews that can all conveniently be found in the repurposed barn.  It is all done very well, of course.  But, the experience for us felt overly commercial.

The Outdoor Activities Center at the Biltmore invites you to play in their 8000 acre backyard, offering everything from hiking and biking their 22 miles of trails, to rafting their river and riding horses in their back woods, to the $1200 full day Land Rover excursion that includes backroads driving lessons, time on their obstacle course, a picnic lunch and a framed certificate so you can “prove your mettle to your friends.”

We opted for the hot and humid walk to the gardens and conservatory and the hike to the Bass Pond waterfall which was far enough away that we saw only 4 travelers in our path. After the Rock Dam hike at Mistletoe State Park we vowed that future hikes would need a payoff to make a trek worthwhile. This waterfall met the grade as it was fast and loud and when we sat alone on the shaded bench and closed our eyes, the conga lines and gross consumerism were washed away.

The Apple Watch says we walked 3.5 miles touring the house and gardens and since lunch consisted of snacking on samples of Biltmore salad dressings and dip with wassail spiced apple juice, we were beyond hungry. Off the trolley and back with Betty, Eric fired up the generator and Sheri made a Cobb Salad to enjoy before the journey home – just one more thing to love about Betty – A/C and a traveling kitchen when you want it most.

We ended our day with a bike ride to Montfort Park Players to picnic at a free outdoor performance of Robin Hood. The spirit of community is alive here with a multi-generational love for Shakespeare and theater. The Biltmore could learn a lot from their play.