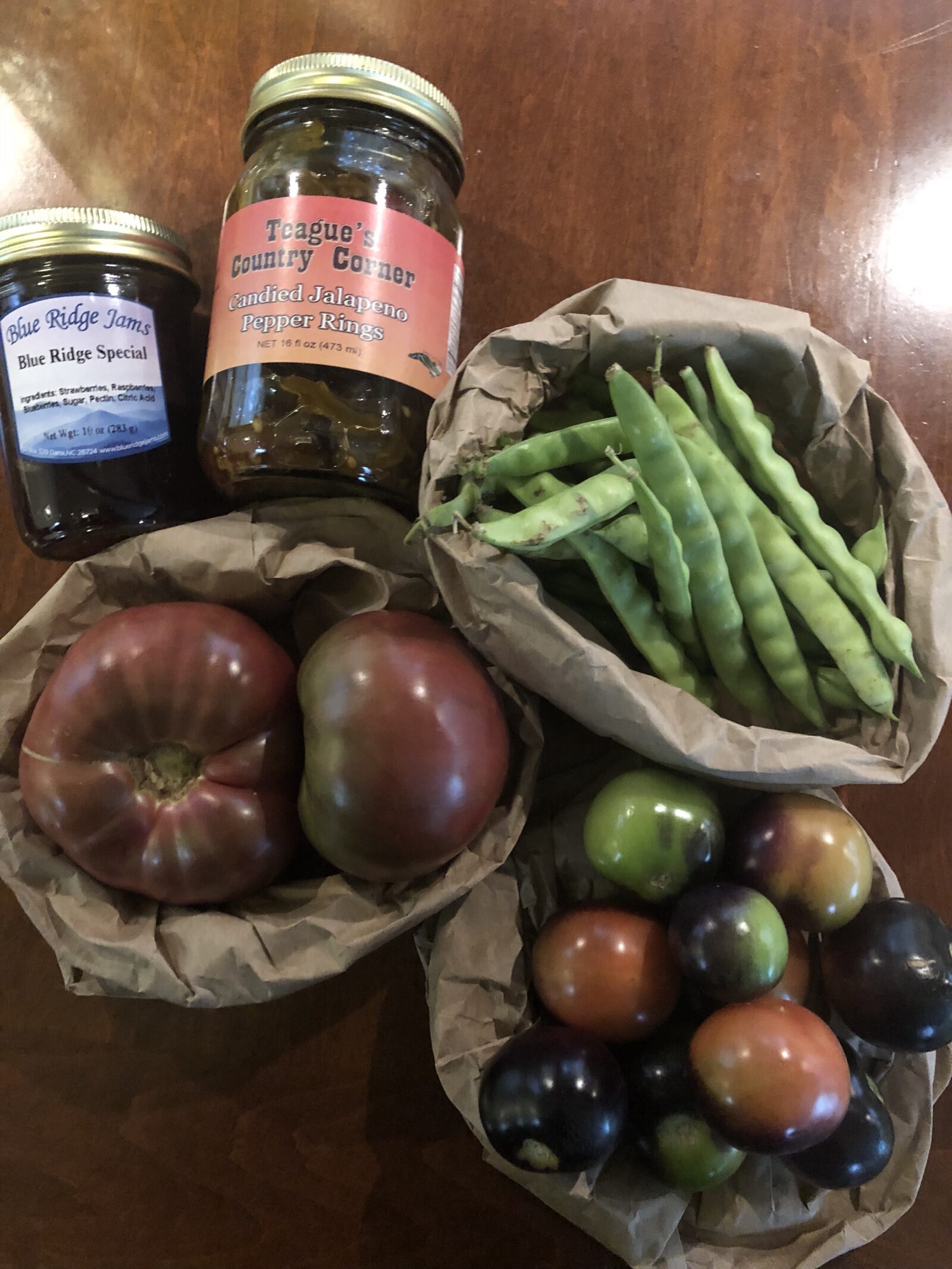 All I can say is that my life is pretty plain

And speak my point of view but it’s not sane

It’s been raining all week in Asheville and today looked like a complete washout as the rain has not stopped since it started last night. Our mountaintop campground now has a river running through it, along with a splash puddle-pool right outside our door. Eric is a weather radar groupie, tracking it hourly and suggested we had the possibility for a break between noon and 1:48 so we planned accordingly for a brief outing.

The morning was the perfect time for consulting calls, along with laundry, food prep, vacuuming, re-arranging to adapt the space to how we are living and planning the last few legs of Reboot Roadtrip. Right on schedule with the rain-break, the drops slowed and we set out for a walk to the WNC Farmer’s Market on Brevard Rd. We’ve ridden this stretch on bikes, where we cross a bridge with no shoulder and cars moving at 50+mph entering either I-40 or I-26. We concluded today that it’s not sane and even worse on foot. But with No Rain for moments in the day, we wanted to see what the market had to offer.

This market is a storage facility with stalls. None of the charm of the Wednesday market at River Arts District and a lot of feelings that things aren’t necessarily local. We’ve seen most of the jarred goods in other state markets and bags are labeled as Packed By rather than Produced By or Grown By. We don’t know the real deal, but if feels more like a wholesale distribution center that also has a retail arm and that most of the goods come from outside the NC area. Nevertheless, we found one vendor who wanted to talk local with us and recommended the Blue Ridge Special – a jam jubilee of mountain-picked berries made 20 minutes on a farm outside of Asheville, along with the candied jalapeños from central NC. We’re addicted to them and on our last jar in the coach so happy to have a new jar on deck.

For fresh produce, we searched every stall and found a few gems like these tiny indigo blue berry heirloom tomatoes and the larger Cherokee purples. Sheri didn’t recognize the green bean in the picture and found out they are Greasy Beans, a southern Appalachian heritage bean found in Southeastern KY and western NC. She was given instructions by the woman running the stand on how to clean and cook them. Boil some chicken broth, olive oil and salt in a pot and drop the beans in for 45 minutes. Add some cured ham if you want salt. Cook em down til the liquid is about gone. We’ll let you know!

Our resident weatherman says Friday and Saturday shows no front and isolated thunderstorms so we will be checking off the last two must-dos on our Asheville list before our departure on Sunday … The Biltmore and a bag of Black Widow coffee from Brew Werks.