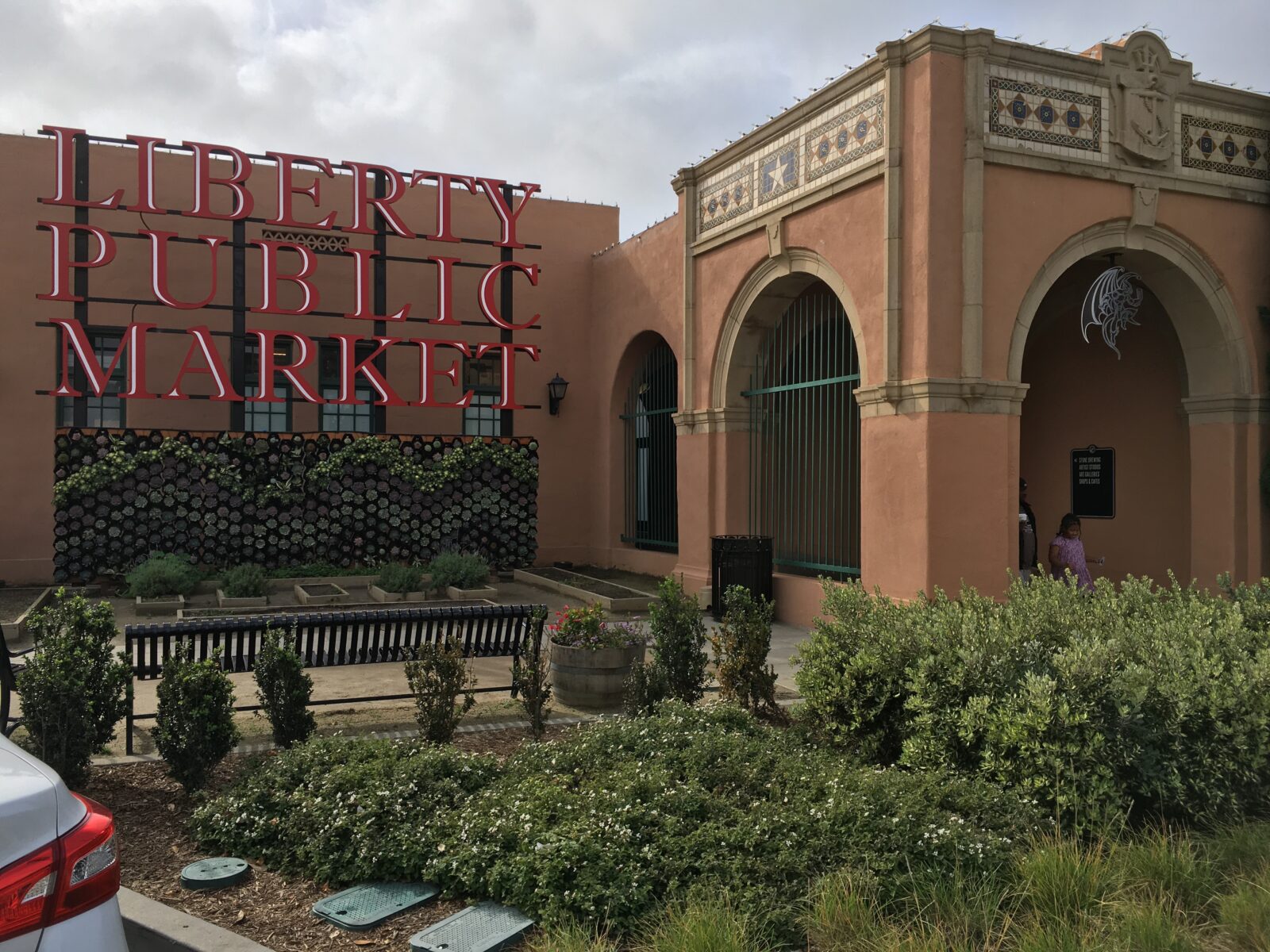 Now that we had a two wheeled perspective on getting around in San Diego, it was time for the two feet and a trolley view.

Eric mapped out a walk-ride route to Old Town San Diego State Historic Park with lunch at former Navy mess hall, Liberty Public Market. It was the first no rain day since we’d invaded from the east and a good opportunity to explore on the tri-colored Metropolitan Transit System Trolley lines.

The Trolley is like the Baltimore Light Rail and above ground version of DC Metro, connecting East and South communities to Downtown. Admiral Baker is 1.5 miles from the Green line Mission San Diego stop and 2 miles from Grantville and with a destination of Old Town, we took the shorter option.

The station was empty, other than a noticeable contingent of homeless brethren. We bought a $5 one day pass that cost $7 with the Compass Card, which is an honor system ride unless the transit cops hop on and swipe your card to see if you tapped for validation at the station. That would never fly in DC.

Old Town San Diego State Historic Park is a staged town of restored/reconstructed buildings that are now museums, shops and restaurants designed to capture the energy of the community between 1821 and 1872. While Eric took the hour-long historic tour with Roy, Sheri took the shopping tour.

Eric learned the history of early San Diego.  Spanish conquest eventually morphed into thousands of vaquero herding hundreds of thousands of long horn. Mexican independence saw Mexico retain possession of the territory.   California, like Texas, really considered itself a separate country in the early 1800s.  Eventually, manifest destiny, the calvary, and the marines helped the Calfornians to see the light and join the union as the 31st state in 1850 as the United States purchased California for $15 mil from Mexico.  Interestingly, today that will get you about 10 acres in Malibu or 1500 in Yuma.  From that point on it battled San Fransisco for the #2 metro area in CA until Microsoft, Google, and Apple settled the issue in San Jose/San Fran’s favor.  Today, despite the incredible weather and beautiful waterfront, San Diego fights to keep the “We Are #3!” banner as it attempts to recover from the loss of the NFL franchise Chargers to LA.

Sheri learned that you can buy overpriced reproductions of Mexican Pottery that are Made in China. Should have stuck with Eric and Roy.

Hungry, we started the 1.5 mile walk up Rosecrans Ave to Liberty Public Market. Once again, we we walked amongst trash, homeless and highly trafficked retail en route to the glossy brochure destination promising a Sip, Shop, Stroll and Savor experience. About 7000 steps in, our hips, back and feet were singing, tummies growling and patience wearing. Out of shape and out of breath. We have work to do!

But of course that would be another day. Today would split a $20 fried shrimp po boy, that came out as a fried shrimp platter. No hoagie, just a piece of heavily buttered toast that Sheri promptly dropped on the floor rendering it inedible. Even the 5 second rule doesn’t apply in the Liberty Public Market.

Those three shrimp and a handful of sweet potato fries each took the edge off. It’s sad to say, but in the old days we would have gone to the craft brewery and kicked back a few strong Belgians with a plate of nachos and LOVED the Liberty Public Market. Now that we are teetotalers, it’s harder. We circled the market at least 6 times looking for something healthy that we couldn’t make at home, which didn’t exist, then something indulgent that we couldn’t make at home and this was the best choice. In the end, we agreed that this new phase of life isn’t about food and drink anymore, as we bought the decadent mixed bag of white chocolate and caramel popcorn for dessert.

Not much feeling like a reverse walk to Old Town, we used the Trip Planner on the MTS website and took the #28 bus down Rosecrans and back to the trolley for the green line ride to Grantville Station. 13,000 steps in, we were facing another 2 mile walk home, with a stop at Von’s grocery store for seltzer and Naan. Two miles became 3 when we found out you have to cross a dirty aqueduct with a 12 foot border fence to get out of trolley territory.

It was a silent, plodding 3 miles. A great amount of time to spend in your head, thinking about the day that passed, the tightness of shoes on toes, why there are so many taquerias on Mission Gorge Road. At the end of the day, comfort set in when we arrived back at Betty and our good friend Jeff left a package on our doorstep. There’s no place like home.