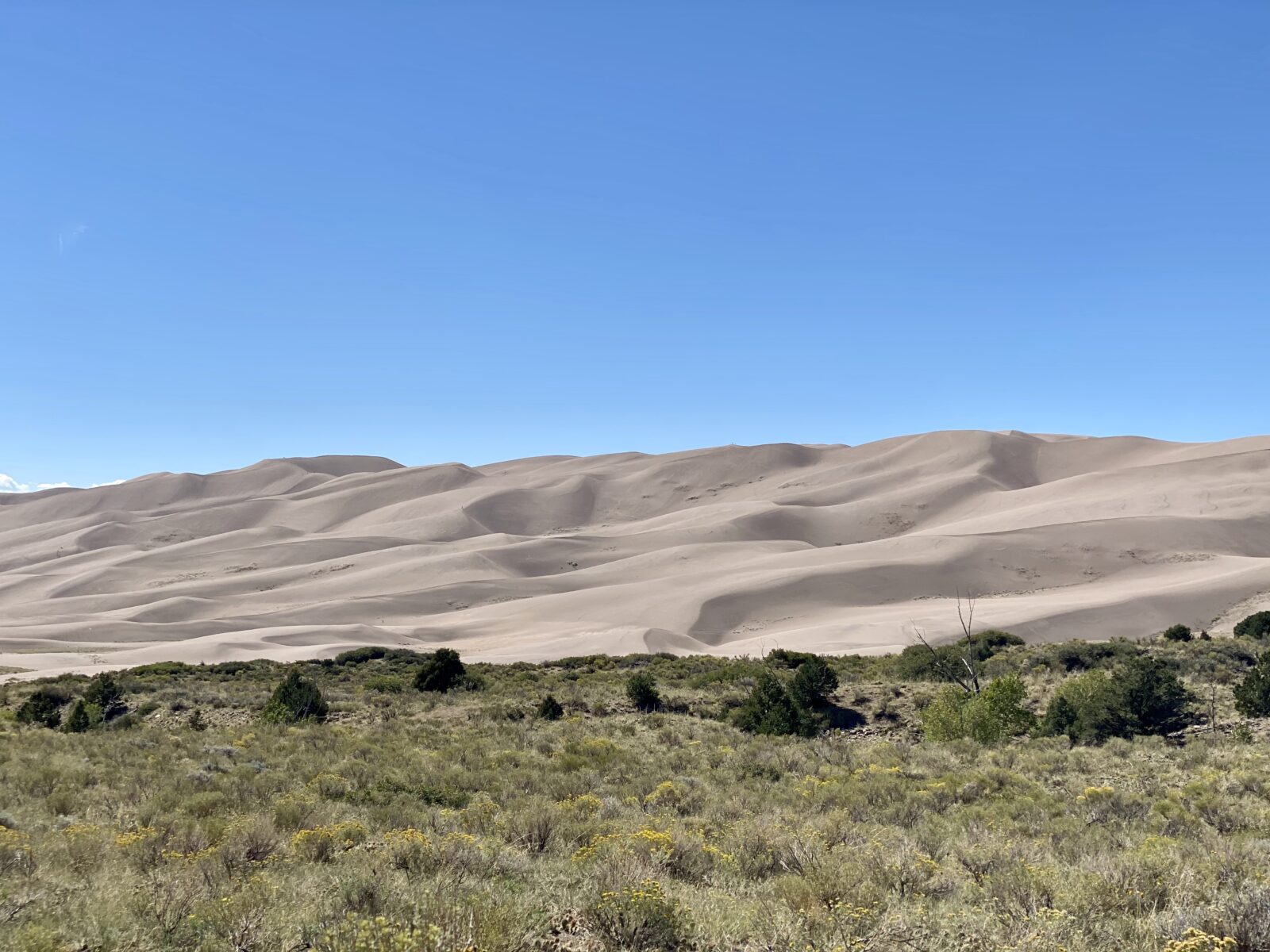 If you’re thinking Sand Dune, you might be thinking long-ass walk to the beach or riding a camel while wearing a white robe and Aladdin headwrap. At Great Sand Dunes in central Colorado it’s neither.

A prevailing westerly wind whips across the sprawling south central Colorado plain sitting more than 7,000 feet above sea level. The Sangre de Cristo mountain range acts as a back-stop, and has been collecting airborne sand for an unknown period of geologic time since no one actually knows how to date sand. The 150,000 acre area is now the Great Sand Dunes National Park, home to the highest dunes in the United States, with its highest, Star Dune, reaching 750 feet. Compare that to a few dozen feet in North Carolina’s Outerbanks or the several thousands of feet in deserts like the Sahara and you get a meet me in the middle experience.

Inside the park is Pinon Flats campground, a reservation only, tough to book destination. When a single night cancellation popped up this week while laying over in Taos, we grabbed it. Switching gears from lounging, thrift shopping and touring, we packed the Go-Tent kit and concoct-a-meal Yeti to get us on the 102-miles-to-Dunes ride the next morning.

The Visitor Center was semi-open with a masked lone ranger handing out maps of the night sky and destinations other than long walks in the sand. While they won’t let you drive onto the dunes, the Medano Pass motor trail winds 11 miles along the base and is open to high-clearance 4WD vehicles at The Point of No Return. Boss insisted on getting sand in his shoes through the soft and deep pits and then rinsing them off in the creek crossings.

Three bumpy hours later we exited the trail appreciative that we had snagged Pinon Flats #31 and not forced into Plan B which was to boondock 6 miles further up the rutted Medano Creek road. Still, the 4-wheeling was a good alternative to hiking since afternoon temperatures were in the high 80s making the dune surface as high as 150 F.

Pitching camp in Pinon Flats, we noticed that the loop had only one reservation faker – the rest were actually full. The REI Grand Hut went up easily, and we are fairly sure that we were the only site with Panang Curry on the dinner menu. Jealous campers could smell the waft of freshly grilled shrimp coated in chili and ginger with bags of cut up veggies and already cooked rice simmering in coconut milk over the propane grill. No cans of Dinty Moore for us! We settled in to camp life around the fire and waited for the sun to set before heading out to hike in this international dark sky park.

The moon rose over the Sangre de Cristo mountains and at one day past full, it was easily equivalent to a 60 watt light bulb coming on. We strapped headlights on our heads, not really needing them, and hiked out into the brown mass.

In true desert style, temperatures had gone from hot to cold in a matter of hours. Fifty degree temperatures are better for huffing up one dune face after another.

The moon cast eerie shadows across the sand and low light level made it difficult to judge distances. We hiked along sand ridges that hid steep, deep ravines. The steeper the dune face, the more steps it took to advance one stride. By the time we had reached the last big face, we felt like we were 120 minutes on a stair climber – all effort and no actual gain in height. With hearts racing and lungs screaming for oxygen in the thin, 8,000 foot air, we finally collapsed onto the cold face of the dune, next to a outcropping of yellow flowers. We would have to be satisfied with that. If there was a ridge path to the very top, we were not going to find it.

Each visit to a National Park brings a new experience. A hike to Mt Brown in Glacier or to Panorama Point at Mt Rainier might be similar in distance and elevation gain, but the feeling of feet sinking into sand is different than scurrying over tree roots or crunching through snow. The common thread is nature’s gift of testing personal limits.

After a leisurely camp morning spent socializing with fellow travelers from the DC area, we retraced our steps through a half dozen don’t blink towns between Taos and Great Sand Dunes. One is San Luis, with a claim as the oldest town in Colorado, est. April 5, 1851. It was an entire town shut down, save the oldest continuous business in the state, R& R Market, the gas station and two recreational cannabis stores. The museum, art gallery, theater, visitor center, police department, town hall, courthouse … everything that made it a get out and look around town had turned to tumbleweed rolling ghost town.

High up on a mountain overlook is a historical looking church with no visible access road. Across from town hall is aluminum recycling disguised as an art installation and next to that a sign for the Stations of the Cross Shrine pointing to a path at its base.

Stations of the Cross is a series of images depicting Jesus Christ on the day of his crucifixion with accompanying prayers. Most common are plaque or reliefs. These were life sized statues cast in bronze, created and maintained from donations by the local Knights of Columbus. We made the pilgrimage along the steep path, stopping at each of the 15 stations before ascending at the Pueblo-style chapel on the hill which was open for devotion as well as providing a cool place to rest and reflect. Whether you are deeply devout, a holiday parishioner, spiritually aware or even none of the above, the artistic interpretation and scripture are truly moving.

The town of San Luis in its COVID-closed stillness was spread out below as if the sand pouring through the hourglass of time had stopped. The namesake Sangre de Cristo mountain range in the backdrop harkened to the Spanish colonization of the area 300 years prior. We took the respite to reflect on the power of the surrounding environment to capture the vastness of time from the creation of the mountains, through the formation of the great sand dunes, to the hardscrabble existence of the oldest town in the area.