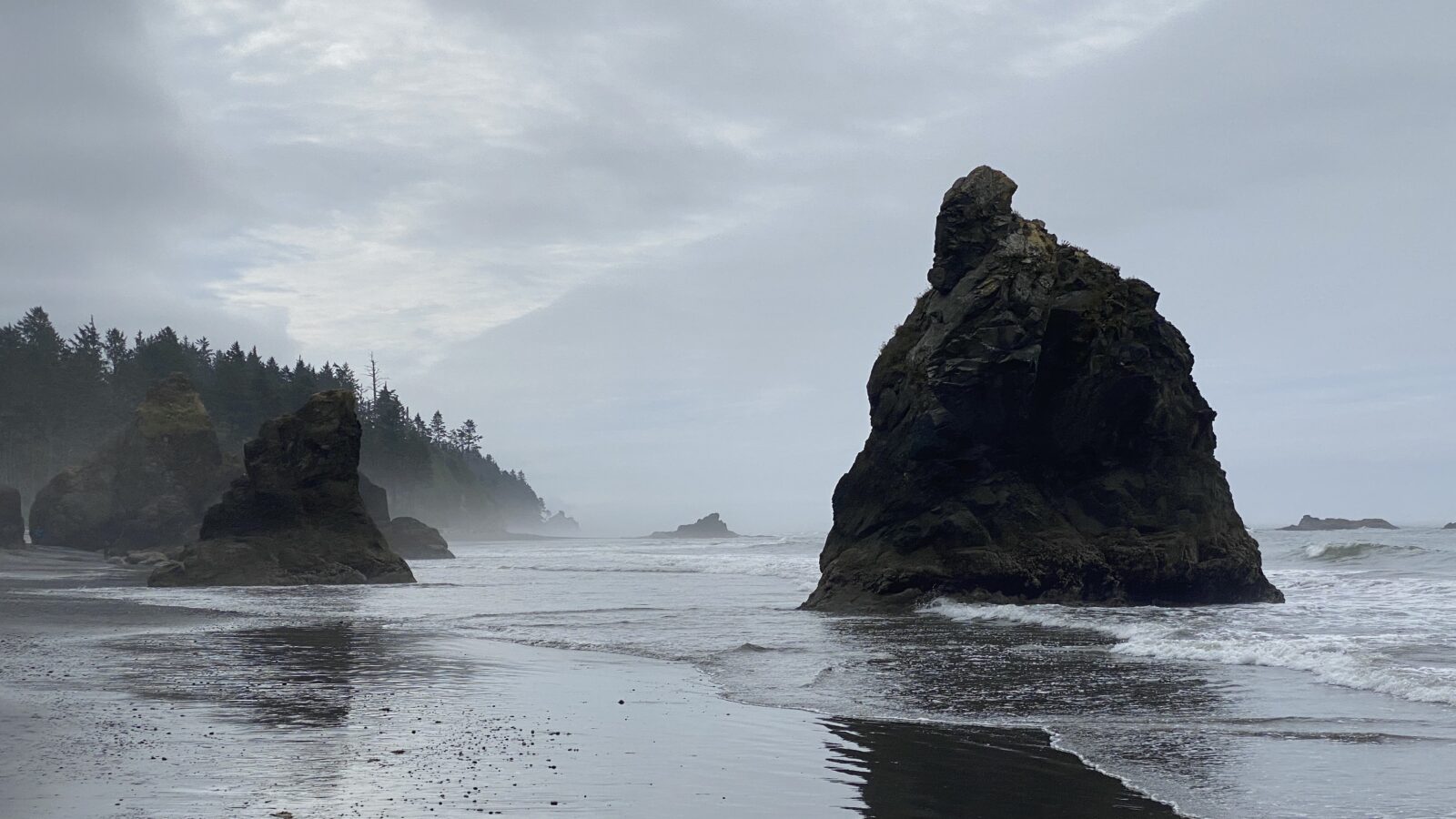 It’s been almost two months exploring the Evergreen State, showing up at the Grand Coulee Dam on June 22nd where we discovered the Badlands of eastern Washington. Sunny, dry and 70 degrees, it was a long sleeved hiking, biking, golfing and, if we only had one, boating dream. We spent our days at the top of Steamboat Rock or the bottom of Dry Lake, outside Grant County libraries for free wifi to post blogs and scouring the neighborhoods from the Coulee City to Soap Lake. A For Sale By Owner in Coulee City looked promising with an RV pad and a barn, but the owner was not home on the Sunday afternoon we biked by and by Monday we were 200 miles away. Weeks later, in a cool Pacific fog on the coast, we saw 100 degree summer temps in Coulee City on the news; not sure we had considered how hot the desert climate of eastern Washington can get.

Two hundred miles northwest, we dry camped for a week in Marblemount, deep in the North Cascade Mountains, deep in National Park and Forest territory. We felt what it was like to tow 10,000 pounds up 6% grades on long stretches with hairpin bends on narrow roads sometimes with ferns as guardrails. We wondered how you get here if you’re not doing that. Fly to Seattle with all your camping gear, rent a car, drive 125 miles, use vault toilets and brush your teeth out of a dishpan? Or stay in a close-as-you-can motel and try to find covid open eateries for your meals? It’s hard doing North Cascade hike-abouts in 2020 if you’re from someplace other than the SeaTac area. No wonder it is the least visited park in the system. Luckily we made it, and were rewarded with a smorgasbord of wilderness activities to suit all our moods. The great expanse of National Park and Forest was a hard place to visit and a harder place to find a home – not that we had any internet anyway.

Surfacing 70 miles west out of the mountains put us in Arlington where we got great wifi from the library parking lot, free reads from neighborhood booknooks and gourmet foods from the grocery outlet. It was a craftsman town with a sweet vibe and a jumping off point for camping in Mt Baker-Snoqualmie Forest. A snow-busted attempt to hike the very high and very famous Artist Point didn’t stop us from primitive camping in a Fir forest or hiking to a 400 foot waterfall. Still wearing hats and gloves, we came out of the woods and into Puget Sound where we fought the crowds on white-knuckle Chukanut Drive, around Whidbey Island and in line at the Shrimp Shack of Anacortes. In 1985, the needs-of-the-Navy Gods had seen fit to send Eric to join east coast squadrons at Virginia Beach versus the west coasters at Whidbey Island. Now the A-6 Intruders were long gone, and after a day of touring so were we.

Moving 100 miles west put us back on familiar ground – Joint Base Lewis-McChord – on the edge of Tacoma and in the shadow of Mt. Rainier, Sheri’s new favorite National Park. Just shy of two weeks, we saw the king from every angle – Panorama Point in Paradise and Mt Fremont in Sunrise, Ruston Way on Commencement Bay, Gig Harbor at a residential overlook, Thea’s Waterfront Park in Tacoma, the Ford dealer parking lot in Puyallup. We saw 60 miles of neighborhoods riding the Comos – check out Stadium district if you’re looking for a value play downtown and avoid Puyallup altogether, especially the Foothills bike trail. We don’t need to watch Redfin on Tacoma, but we now know all the neighborhoods in and around if you’re interested.

Pacific Beach is a different story. Another 110 miles to the west is as far as you can go. Ten days was all it took and we were meeting a realtor at a fixer on SR 109 where you could sit out on your deck and watch the waves roll over the sand. The perfect location – active lifestyle pursuits, non-stop flights from Seattle to DC and Tampa, temperate climate – 40-70 degrees year round with no snow. Sure there’d be rain, but we hadn’t seen any. So what that the closest grocery store was 40 miles away, an hour and 15 minutes, in a depressed town with an active rail cargo line, drawbridge and two lane thru street stifled with traffic. But you can drive your truck on the beach! The house had potential but why was there a wall of windows that didn’t open? Maybe because you can’t open them 10 months out of the year because it is either too cold or raining? Over 100 inches annually. Not as many as Forks, but close enough. We didn’t call Jim to make an offer, but we will keep the Navy’s RV park in our contacts. When heat waves bake the country and derechos rip through the heartland, Pacific Beach is heaven on Earth; but only in August.

You can’t go to DC and not go to the US Capitol just like you can’t go to Olympic National Park and not go to Hurricane Ridge. Tired of wearing coats, we originally justified our way out of the 130 mile trek Port Angeles to hike the Hill saying we already hit the Hoh, isn’t that enough? But when temps along our route out of Washington soared into the 100s, we chose North one last time because hadn’t actually SEEN Mt Olympus, so were we really there? After 4 full days of wildflowers, tidepools, barking dogs and checking all the tourist boxes, we agreed it’s a nice place to visit, but our jive didn’t quite mesh with their vibe; too much grunge and not the stylish kind. This place was more Curt Cobain hard living after party than Curt Cobain MTV special unplugged.

Back at JBLM, in the watchful eye of Rainier, we push out Wednesday on the Ten Days to Taos leg of our journey. Doing a deep clean on Roxie while we have full hookup – defrosting the fridge, waxing the truck, looking at everything in our bins spread out on a picnic table; swapping sweatshirts for t-shirts and provisioning for cold meals as the 100s are still in our sights. While we wanted to see Boise and Salt Lake City along the way, the temps are just too high for a southwest crossing so we’ll stick to the North, back to Montana then straight down into New Mexico, in full-on flow-mode. That’s code for no reservations and no concrete stopping points. It’s only nerve wracking if you worry about it.

Bye George, we did it

We cannot tell a lie. There is a lot to love about Washington. Yesterday we swung by the Walmart to pick up some groceries and dropped by our favorite, REI to check out the end-of-season clearance. Local news is obsessing over the 91 degree high temperature today. Mount Rainier silently rules over all in surreal back-drop. Just like when we fell in love with San Diego sunshine last winter, this summer’s Washington cool captured our hearts. We like to live like a local even picking out the perfect house while we’re there. We’ve got a long list of ex-places we love. Some say we’re insane. We’ve got a blank space, baby. We’ll write your name.