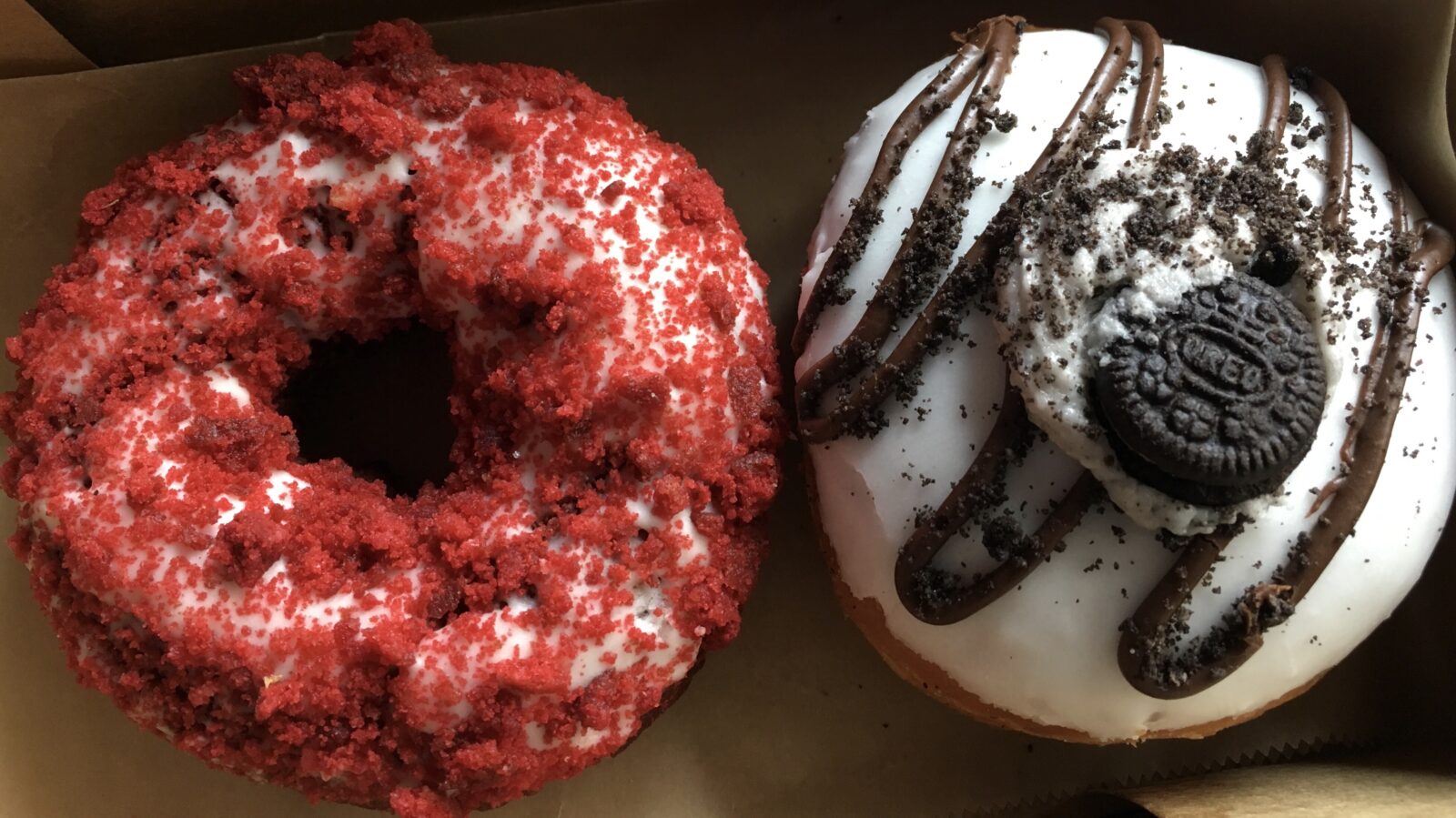 It was the calm before the storm – the last half day of dry before departure from 30 days in San Viewego.

As we’ve written before, it’s been a wet one here and the radar was telling us we could go to the ball, but be back by the stroke of 2pm or get walloped.

Besides the young Navy kids getting their PT on under ominous skies and a balmy 62 degrees, we were the lone riders on both the bikeway and the ferry crossing. Everyone knew what was coming. Pulling into downtown around 8:50am, we had more than an hour to kill before the Maritime Museum opened so we went in search of art and donuts.

There’s a vibrant outdoor art scene in San Diego. This is 25 foot height “Pacific Soul” by Barcelona native, Jaume Plensa who says he hopes his sculpture will be an icon for the city, embracing a diverse community which is always changing yet always intrinsically connected to the ocean. It was commissioned for the 41 story luxury residential tower with 215 condos priced from $1.1 million. Not sure how diverse the tenant community will be, but it’s a monumental work of art.

Riding up Broadway, from the Embarcadero to the Gaslamp District, art is part of the landscape, even the design of street lights and trolley station.

Onto the next stop … Donut Bar! Since there are only two in the country, SD and LA, we had to visit one last time for the Valentine’s Day specials – Red Velvet and Stuffed Oreo.

The Maritime Museum is a few blocks from the USS Midway.  Eight unrelated and varied ships from varied time periods are tied up to the waterfront behind a nondescript waist-high fence.  It looks totally unremarkable, that is, until you really start to look.  Like a neighbor with a ’63 split window Corvette in his garage, these ships are not your everyday ride. But before we toured, we checked out local artist Tony Trowbridge, selling his Sand Diego watercolors out of his car for $20. We bought the only painting he had of the Navy shipyard and gave him some marketing advice to paint more ships. Especially if he was going to sell outside the Maritime Museum.

The museum is literally kept afloat by more than 200 docents who volunteer their time, talent, and labor to eight original and replica ships and hundreds of display models and artifacts housed in the lower deck of a National Historic Landmark – the 1898 steam ferry boat called Berkeley.

The collection has some remarkable pieces, probably the coolest of which is a Soviet submarine that nearly started a nuclear war during the Cuban Missile crisis of 1962.

The original Foxtrot class boat is totally open for boarding, and virtually unchanged.  The tense two days it spent being hunted and depth charged by U.S. forces is recreated inside.  Signs warned us that the exhibit is extremely realistic and they weren’t kidding.  As we climbed and squeezed out the aft hatch at the end of the boat, fresh air and sunlight never felt so good.

Next to the Russian sub was the HMS Surprise, the frigate used to film the Russell Crowe big budget blockbuster, Master and Commander.  The movie was overshadowed by the impossibly long (for Eric anyway) Oscar winning Lord of the Rings: Return of the Kings in 2003.  He joins about three other people who prefer the Crowe piece about life as a British privateer operating halfway around the world in the age of sail.  Maybe its all the CGI that turned him off in LOTR, but he felt like Captain Jack Aubrey (Crowe) as he sat in the Captain’s cabin and aimed the 9-pound cannons.  Sure, it’s a fully functional replica of 1750 British 6-rate ship of war, but it is the actual replica used in the movie.  If you’ve seen the movie as many times as he has, finding all the little details still in place as we toured was awesome.

We moved a bit quicker through six other ships as we could feel the weather changing. The Star of India trading ship that circled the world 21 times; The San Salvador, a replica of Carrillo’s Spanish galleon that landed in San Diego in 1542; The Californian, the official tall ship of the state; The Medea, a steam yacht of a wealthy businessman; and the USS Dolphin, the deepest diving sub in the world where Eric took this pic through the periscope.

It started to spit from the sky so we hightailed it to the 1pm ferry. By the time we crossed the bay, the wind had kicked up and was moving the rain horizontally.  A fellow bicyclist saluted with a chuckle and a good luck as we took off.  With the weather app indicating a break in the rain within the hour, we zipped up and headed one mile north to the Navy Commissary to wait it out.

Good luck for us, the NEX had a dollar special on Auntie Anne’s pretzel of the day.  It didn’t make us any dryer, but it didn’t make us any unhappier either!  Since we were there, we provisioned the panniers with what they could hold and waited for the break-which never came.

Since we were already getting soaked, we detoured slightly by the church thrift shop from the day earlier and stuffed two more new puzzles into the pannier since we had the room.  Finally, there was nothing left to do but speed down the familiar bikeway kicking up a rooster tail of water and getting the kind of soaked you get when you jump into the deep end of a pool.  A passing SEAL out for a fun run in the torrential downpour gave us an approving nod as we passed and we felt like we had earned our honorary Naval Amphib Base badge.