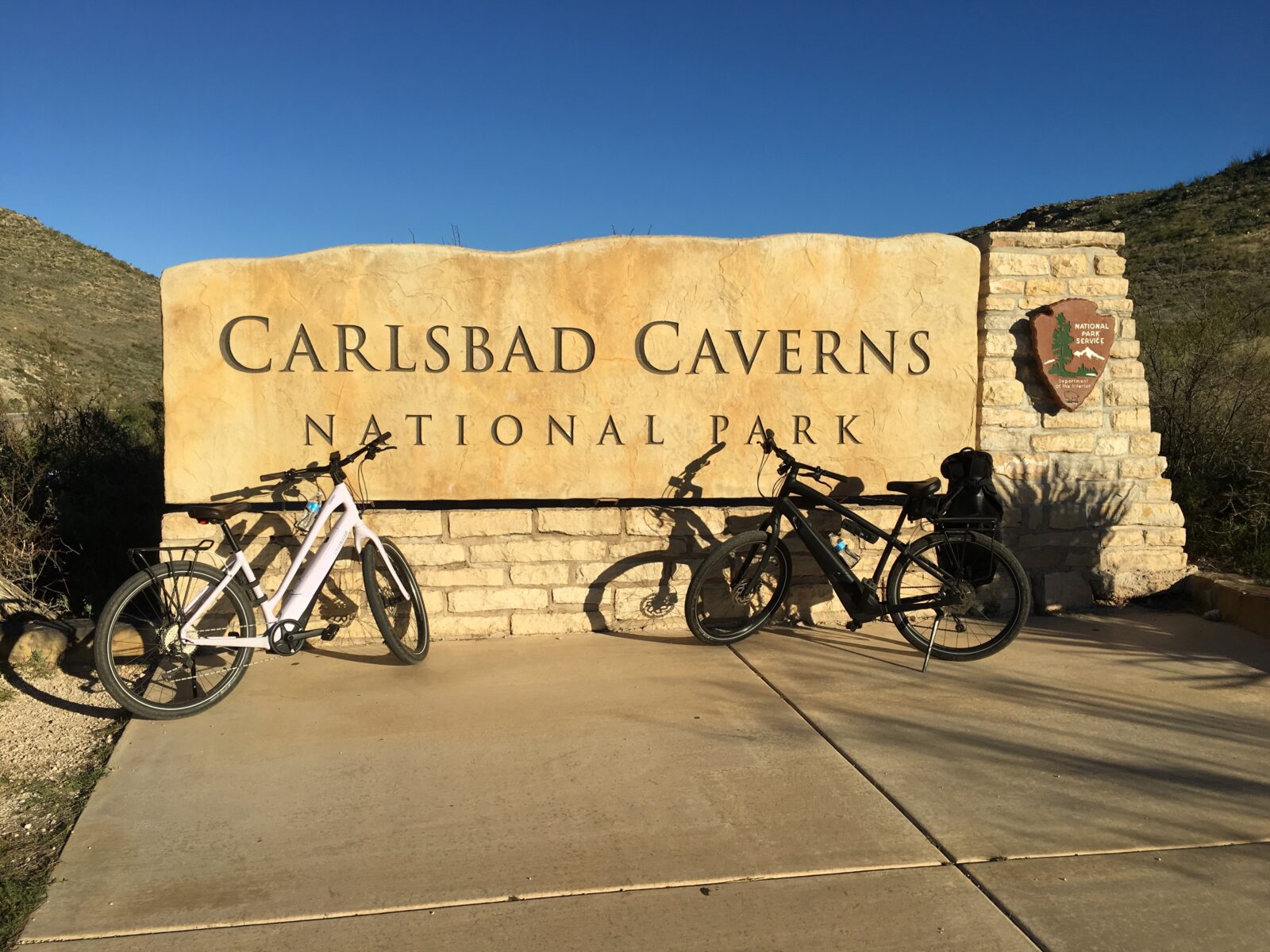 Whites City RV Park is not much to look at. We parked Betty in our assigned spot which entailed turning into a parking lot and stopping next to the power receptacle. Whites is essentially a campground on the shoulder of the road. It gets terrible reviews, but we like it because it is right at the entrance to Carlsbad Caverns National Park and oh so convenient for us bikers.

Around 7:30 this morning, we unloaded the Comos and headed up the 7 mile entrance to the Visitor Center, which sits at the top of a ridge line in the Guadalupe Mountains. It is a steep climb, and that might have been tiring or at least annoying, but … COMO’n! Piece of cake.

One of the joys of being on a bike is that you are one with your environment. When it is cold, the air cuts at the exposed skin. When the wind blows, it helps or it hurts your effort. A when you here noises in the bush, it is probably herds of deer, herds of rams, or wild boar. Yep, we saw them all – and lots of them.

With the Comos locked and bags loaded with camera gear, we traded $24 for the experience of a lifetime. Some days you feel like the country is headed in the wrong direction and government cannot work. And then you enter our National Park system and realize what a great job government can do. No hassle, no security checkpoints, no long lines or shuttle from the remote parking facility – just friendly rangers and a natural wonder at Carlsbad Caverns.

We entered the cavern the same way the bats exit except we used the path. Dropping 750 feet into a hole in the ground was viscerally disturbing. You had to wonder about that first guy to do it in 1898 with a rope.

After a mile hike we arrived in the main cavern, called The Big Room. If you have ever been to the Grand Canyon, remember that feeling. It’s just like that. Now, pull out your pictures from the trip to the Grand Canyon. Not so much, right? There are some things in this world that a picture just cannot capture. Standing 754 feet underground in the Big Room, which is larger than four football fields, is one of them. Nature has spent the last 250 million years “decorating” the cave. It is simply overwhelming, other worldly, awe inspiring, …. you pick the superlative.

We toured the massive underground structures for hours both on guided and self-guided tours. The park service has done such an incredible job making the caverns accessible and beautiful you actually want to pay your taxes.

When we were chilled to the core from the underground temperature and our OMG meter was pegged, we took the elevator 75 floors up and greeted the sun again.

Unhitching the Comos (we can say that out west, right?) we took the road less traveled home and descended the ridge via a 10 mile nature access road. The rangers said it was closed to vehicles today, but we were sure they did not mean the Comos. When we opened the coach door, we were treated to the smell of chili in the slow cooker.